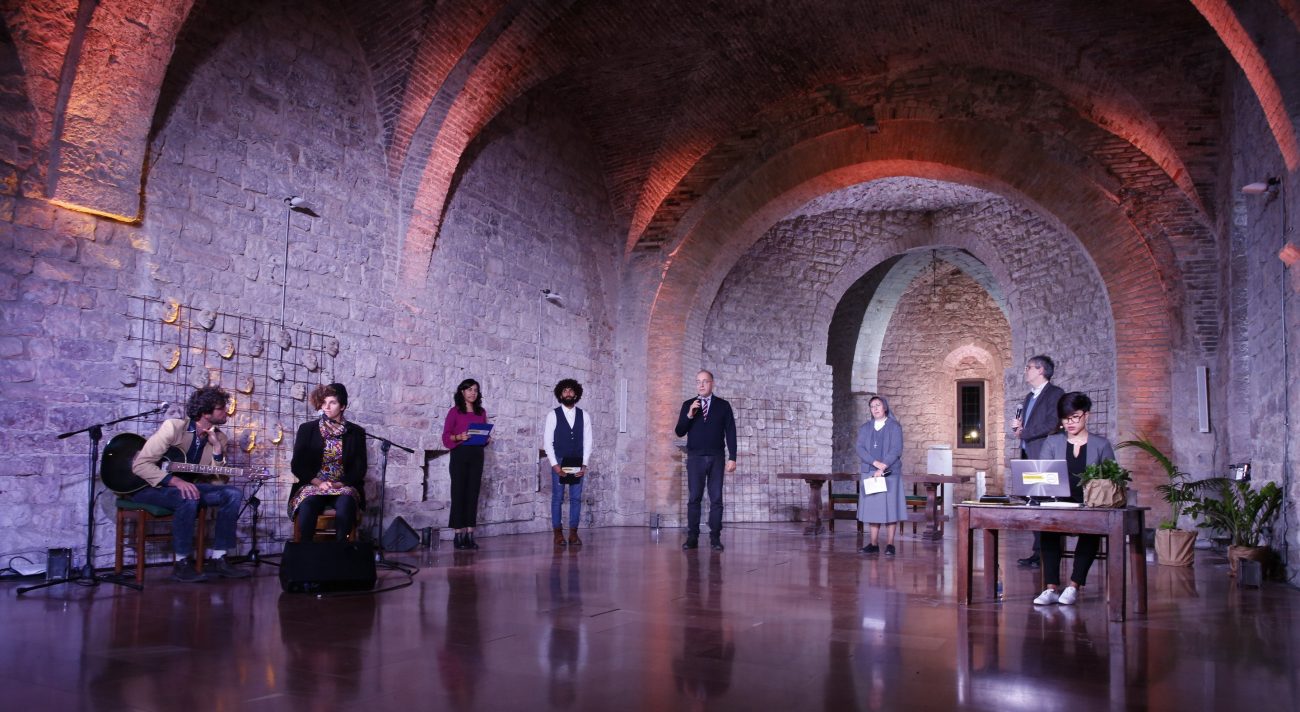 People participate in the "Economy of Francesco" virtual meeting from Assisi, Italy, Nov. 21, 2020. The meeting is a project of Pope Francis, who has called for a different kind of economy that better respects humanity and nature. (CNS photo/Economy of Francesco)

VATICAN CITY (CNS) — Although the task is daunting, young economists, researchers and entrepreneurs can hone their skills and share them in a way that will impact the world and create a brighter future for all, Pope Francis said.

“History teaches us that no system or crisis can completely suppress the abilities, ingenuity and creativity that God constantly awakens within us,” the pope told 2,000 professionals under the age of 35.

As part of the Economy of Francesco project, the young adults had been meeting online since March to conduct research and develop action plans for promoting an economy focused on human flourishing in a way that helps the poor and the planet.

They gathered for a virtual meeting Nov. 19-21 to share their ideas, including with internationally acclaimed experts, such as economists like Jeffrey Sachs, Kate Raworth and Muhammad Yunus, who offered encouragement and suggestions for next steps.

And Pope Francis, in a video message closing the meeting, urged them to continue, bringing their faith, their expertise and their enthusiasm to the task.

“Do not seek shortcuts, however attractive, that prevent you from getting involved and being a leaven wherever you find yourselves,” the pope said. “No shortcuts! Be a leaven! Get your hands dirty!”

Although they were supposed to meet in person in Assisi last March, the COVID-19 pandemic made that impossible; instead they began meeting online in 12 “villages,” discussing specific economic issues such as finance, women in the workplace, ecology, military spending, systemic inequality and agriculture.

“You brought to it all of your passion for the things that excite you, cause you concern, make you indignant and urge you to work for change,” the pope told them. Inspired by St. Francis of Assisi, they did not get “trapped in thinking ‘this is the way things have always been done,'” but set off together to find a new way.

“You recognize the urgent need for a different economic narrative, for a responsible realization that the present world system is certainly unsustainable from a number of points of view and is harming our sister earth, so gravely maltreated and despoiled, together with the poor and the excluded in our midst,” the pope said.

“Those two things go together: If you harm the earth, the number of poor and excluded increases,” he said. “They are the first to be hurt and the first to be forgotten.”

Pope Francis said a transformation of the economy will require both personal conversion from manic consumption and waste as well as changes in the way businesses and governments operate.

Young people must insist on being part of that process, the pope said. “You cannot absent yourselves from those places where the present and future are generated. You are either part of them or history will pass you by.”

But he also encouraged them to be sure that the poor and people usually excluded from social life and community decision-making also are involved.

“‘The poor’ and ‘the excluded’ are real people,” he said. A just and fair economy cannot be based on charity or philanthropy, which always will be necessary, but must involve them in the process of discovering new models of economic behavior.

A sense of the common good and a commitment to real dialogue, especially with people who think differently, are essential, Pope Francis told them.

“It is not easy to move toward real solutions when those who do not think like ourselves are discredited, slandered and misquoted,” he said. “Discrediting, slandering and misquoting are cowardly ways of refusing to make the decisions needed to solve many problems.”

NEXT: Amid rising protests, Guatemala’s bishops call on president to veto budget