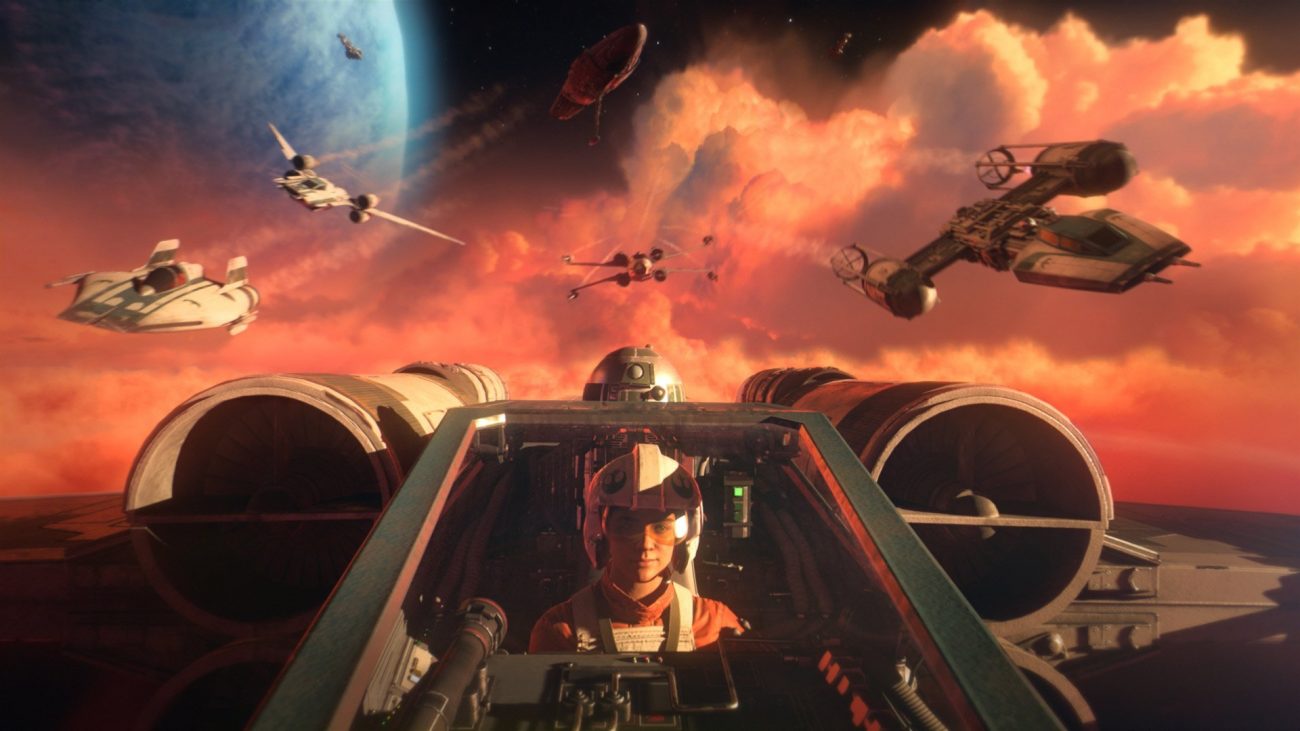 This is a scene from the video game "Star Wars: Squadrons." The Catholic News Service classification is A-II -- adults and adolescents. The Entertainment Software Rating Board rating is T -- teens. (CNS photo/Electronic Arts)

NEW YORK (CNS) — With Christmas approaching, here, in alphabetical order, are capsule reviews of some video games that would make suitable gifts for young recipients. Unless otherwise noted, the Catholic News Service classification is A-I — general patronage and the Entertainment Software Rating Board rating is E — everyone.

This fifth installment in the popular social simulation adventure franchise originally launched in 2001 is a kid-friendly title to which adults also will flock. Gameplay is set on a main isle from which the human character controlled by the player can travel to so-called mystery islands.

Everyone he encounters is an anthropomorphized animal and all are friendly, cheerful and supportive of one another, fostering a positive atmosphere. As with the other games in the series, there’s no linear storyline.

Though the lack of different biomes among the landscapes can feel repetitive, the upbeat tone and fun activities of the game more than compensate for this shortcoming. Playable on Nintendo Switch. Cartoon mischief.

The creators of this colorful title imagine the 25th century as an Intergalactic Age of Discovery, a time when space explorers roam the galaxy. As one such voyager, players terraform planets, mine resources, craft machinery and discover strange ruins. Violence is kept to a minimum. Players can die, but then they respawn.

Though the gorgeous artwork is vivid, the graphics occasionally glitch, causing characters or vehicles to clip through the ground. And the terraforming mechanic is clunky and unintuitive. Still, it’s worth putting up with these frustrations to enjoy the tranquility of this survival sandbox game. Playable on PlayStation 4, Xbox One and Windows. Mild cartoonish violence.

Colorful addition to the franchise built around the red-capped plumber of the title who once again comes to the rescue of the Mushroom Kingdom after King Olly covers Princess Peach’s castle in paper streamers, imprisoning everyone inside and transforming them into origami. In the course of his adventure, Mario discovers Olivia, Olly’s sister who was punished for trying to stop her brother’s scheme. She joins Mario on his mission, hoping to save her sibling at the same time.

Enemy encounters take place in an arena and can eventually feel repetitive as they pull the gamer out of the story. Overall, though, this is a well-written, beautifully rendered, concern-free choice, one that’s worth the time and effort. Mild cartoonish violence.

In this immersive addition to the long-standing franchise, pilots race across space as the fledgling government of the New Republic, recently formed by the Rebel Alliance, undertakes the construction of a powerful flagship for their fleet while the evil and crumbling Galactic Empire assigns its warriors the task of ensuring that this vessel is destroyed before it ever takes to the skies.

Throughout the story mode, players alternate between the two forces. Still, the line between those who are in the right and those backing an immoral cause is clearly delineated. And the struggle is free of gore, though whenever ships are destroyed, they erupt in a fireball and cries of pain can be heard over the radio from dying civilians or enemy pilots.

Taken together with some earthy talk, the pyrotechnic effects and grim vocals make this an inappropriate title for young kids, albeit one that’s acceptable for most others. Playable on PlayStation 4, PlayStation 5, Xbox One, Xbox Series X and Windows. Stylized combat violence, including explosions, occasional crass language. The Catholic News Service classification is A-II — adults and adolescents. The Entertainment Software Rating Board rating is T — teens.

Perception affects reality in this intriguing forced-perspective puzzle game. As the patient of a doctor (voice of Max Howarth) who has developed a sleep therapy program based on lucid dreaming, players enter that state only to find, once they’re meant to come out of it, that something has gone wrong and that the physician cannot awaken them. As they then move through nine different levels of gameplay, they discover that certain items they encounter can be changed simply by looking at them from a different angle.

Alongside the technically simple graphics is a soundtrack that beautifully complements the immersion experience. Aside from brief images of blood that, characteristically, turn out not to be what they seem at first, there is no problematic content while underlying the fun there’s a valuable lesson about the importance of innovative thinking and persistence. Playable on PlayStation 4, Xbox One, Nintendo Switch and Windows.

NEXT: Dig into these Christmas recipes — if can afford them