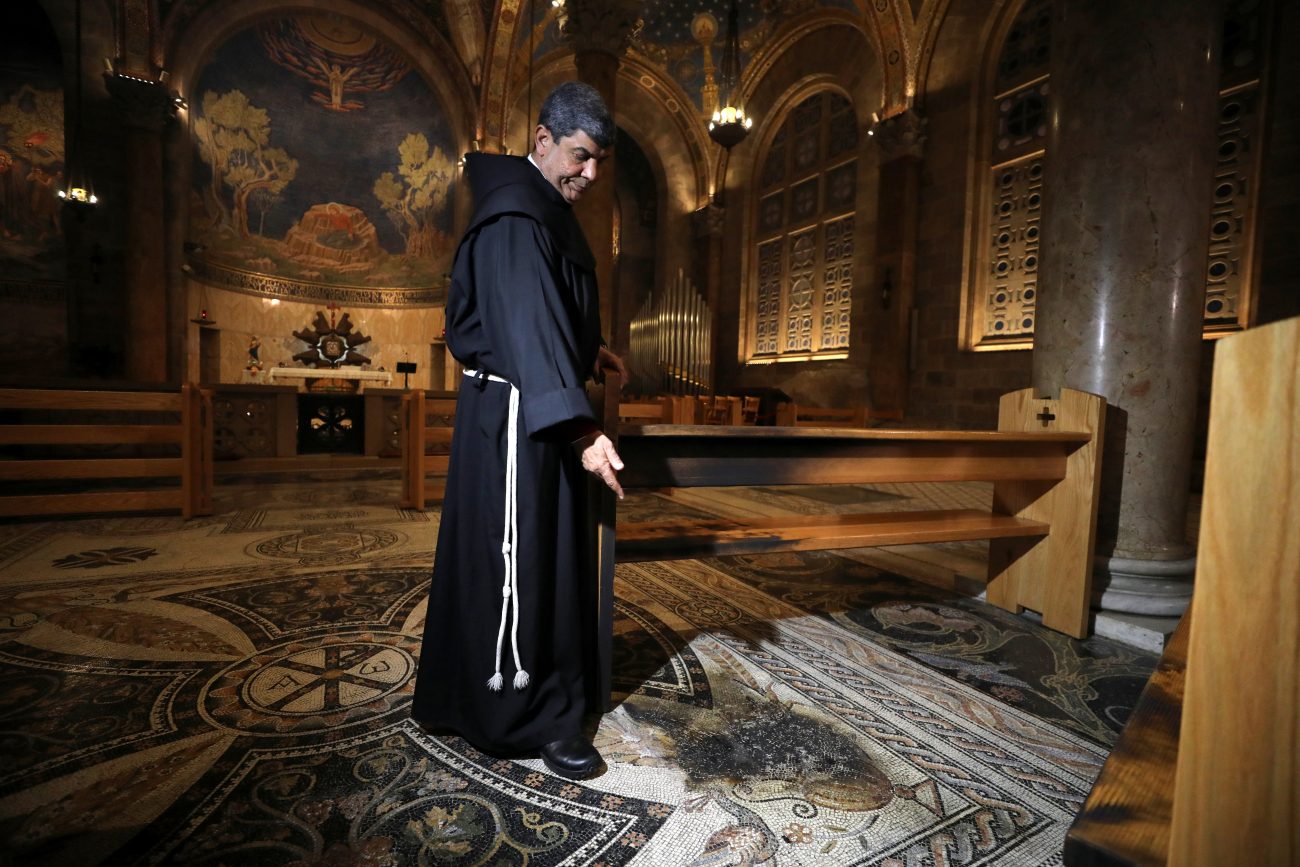 Franciscan Father Ibrahim Faltas from the Custody of the Holy Land inspects the damage to the floor after a man tried to set fire to the Church of the Gethsemane in Jerusalem Dec. 4, 2020. (CNS photo/Ammar Awad, Reuters)

JERUSALEM (CNS) — Israeli police arrested a Jewish man after he allegedly threw a firebomb inside the Basilica of All Nations at Gethsemane Church on the Mount of Olives Dec. 4.

Though not immediately identified, the man was wearing a large crocheted skullcap generally associated with Jewish settlers.

Franciscan Father Benito Choque, superior of the Convent of Gethsemane, told Catholic News Service the attack took place at 1:50 p.m. and that some of the benches and part of a Byzantine mosaic were damaged by the fire. Employees of the convent subdued the man, then called police, who took him into custody, Choque said.

“It was only a scare but now it is all over, and we have forgiven,” said Father Choque, who was inside the convent at the time of the attack. “We Christians are persecuted all over the world, but we continue to pray and forgive which is a tenet of Christianity. We (Franciscans) are custodians of the holy places. This is not the first attack in our history, and we will continue with our presence.”

The Church of Gethsemane is built on the rock and next to the garden where Christians traditionally believe Jesus prayed and passed his agony prior to his arrest and crucifixion.

In a press statement, Micky Rosenfeld, Israeli police foreign press spokesman, said police had arrested the 49-year-old suspect, who was being questioned. Rosenfeld said the incident was initially being investigated as criminal.

Wadie Abunassar, adviser to the Assembly of Catholic Bishops, said the bishops were thankful that the fire was extinguished quickly and caused only minor damage. He also thanked Israeli police for their “swift action” and arrest of the suspect.

“We demand that they seriously investigate this attack and bring the perpetrator to justice,” he said in a statement released to the media following the attack. The statement said the bishops urged government leaders to examine the motives for the attack, “especially since the suspicions indicate that it may be the result of racist motives.”

He added that if the motive is found to be racist, conclusions must made not only in regard to security issues of holy sites, but also regarding the lack of education about tolerance of others in some Israeli schools.

He told CNS there have been about 10 attacks against Christian holy sites over the past three years in Israel, with virtually no arrests, let alone convictions.

PREVIOUS: Pope: Make your heart accessible to people with disabilities

NEXT: Pope Francis plans to visit Iraq in March