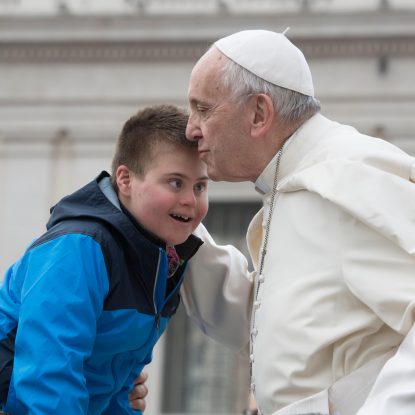 Pope Francis kisses Peter Lombardi, 12, of Columbus, Ohio, who has Down syndrome, after the boy rode in the popemobile during his general audience in St. Peter’s Square at the Vatican March 28, 2018. (CNS photo/Vatican Media)

“Creating a fully accessible parish requires not only the removal of architectural barriers, but above all, helping parishioners to develop attitudes and acts of solidarity and service toward persons with disabilities and their families,” the pope said in his message, published Dec. 3.

For the church, he said, “our aim should be to speak no longer about ‘them,’ but rather about ‘us.'”

The U.N. theme for the 2020 celebration of the international day was “Building Back Better: Toward a disability-inclusive, accessible and sustainable post COVID-19 world.”

Pope Francis said he was struck by “the expression ‘building back better,'” which made him think of the Gospel story about a house built on rock or on sand.

When used in reference to the way society, and sometimes even the church, treats persons with disabilities, he said, the rain, rivers and winds that threaten the house in the Bible story “can be identified with the throwaway culture widespread in our time.”

In a throwaway culture, he said, “some parts of our human family, it appears, can be readily sacrificed for the sake of others” or simply pushed aside and ignored.

Such an attitude “ignores the inevitable fact that frailty is part of everyone’s life,” he said. And, in fact, some people “with even severe disabilities, despite great challenges, have found the way to a beautiful and meaningful life, whereas many ‘able-bodied’ people feel dissatisfied or even desperate.”

To “build back better,” he said, inclusion is key because “the strength of a chain depends upon the attention paid to its weakest links.”

For the church, he said, religious education programs must be available to those with disabilities, and every seminarian, priest and catechist should be educated about disabilities and familiar with “the use of inclusive pastoral tools.”

“Before all else,” he said, “I strongly reaffirm the right of persons with disabilities to receive the sacraments, like all other members of the church. All liturgical celebrations in the parish should be accessible to them, so that, together with their brothers and sisters, each of them can deepen, celebrate and live their faith.”

And, like all members of the church, they should know they are called to be “missionary disciples,” sharing the faith with others, he said.

NEXT: Man arrested for firebombing Catholic church in Israel