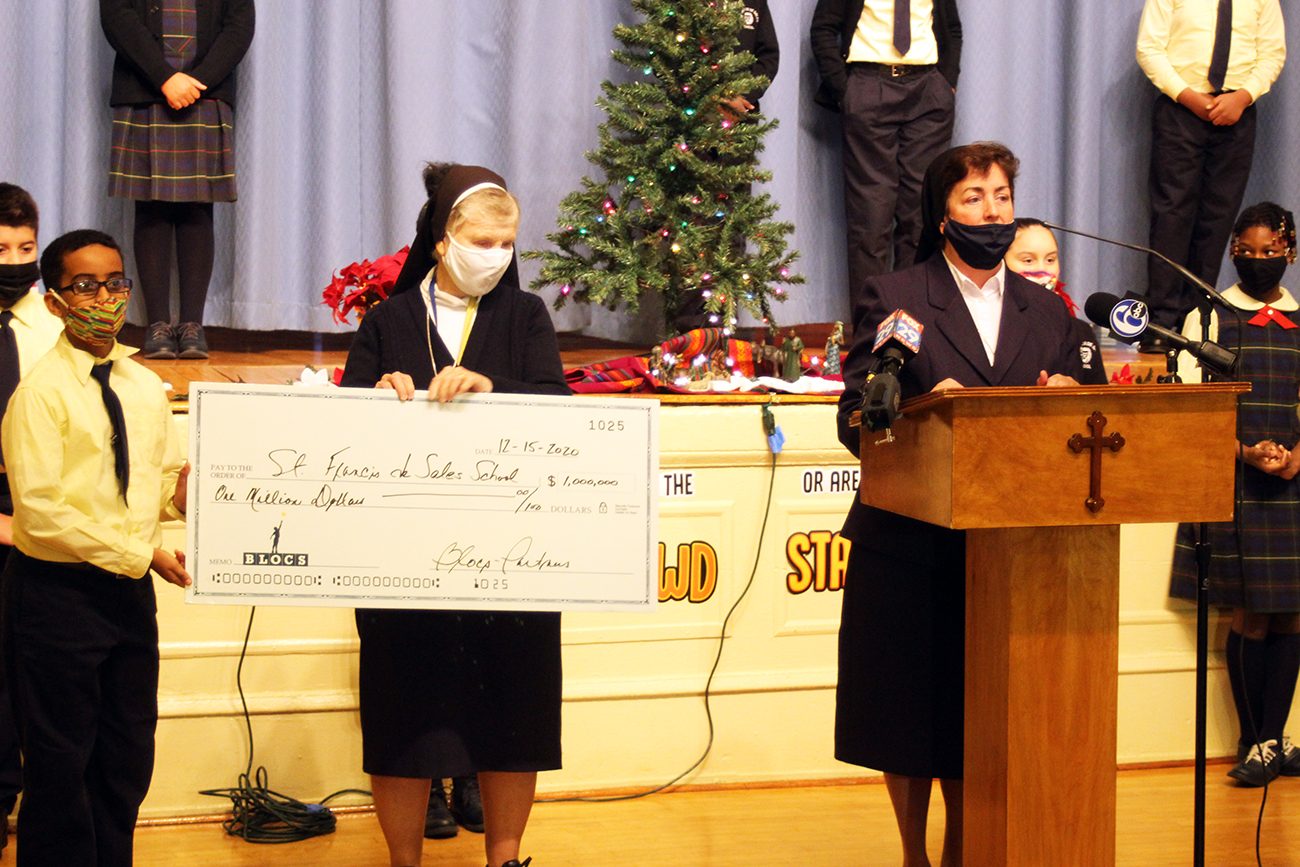 Immaculate Heart of Mary Sister Mary McNulty, principal of St. Francis de Sales School in Philadelphia, addresses local media at a Dec. 15 presentation of a $1 million gift made to the school by an anonymous donor. (Photo by Gina Christian)

A “secret Santa” dropped off an early Christmas present at a West Philadelphia Catholic school, providing $1 million in tuition assistance for the next two years.

An anonymous individual recently named St. Francis de Sales School as the beneficiary of the donation, which was made through Pennsylvania’s Educational Improvement and Opportunity Scholarship Tax Credit (EITC and OSTC) programs.

Immaculate Heart of Mary Sister Mary McNulty, the school’s principal, said she was both “very shocked and happy” when notified of the gift.

“I felt like God’s blessings were just falling on us,” she said. “I knew how many children and families would be so overjoyed at the news.”

A small number of students joined Sister Mary in the school auditorium Dec. 15, where Jim Downey, development manager of Business Leadership Organized for Catholic Schools (BLOCS), presented the check to the school during a brief, socially distanced ceremony.

An independent charitable entity based in King of Prussia, BLOCS provides millions of dollars in tuition aid for Catholic school students throughout the five-county archdiocesan area. In particular, BLOCS leverages the EITC program, which allows qualified businesses to receive tax credits for donating to approved scholarship organizations, or SOs.

The SOs in turn allocate scholarships to students in non-public schools. EITC credits can equal 75% of a given contribution, up to a maximum of $750,000 per year, and can be increased to 90% if the business commits to donate the same amount for two consecutive years.

Through the OSTC program, which was launched in 2012, eligible students who live within the boundaries of a low-achieving school can apply for a scholarship to attend another school, either public or non-public. 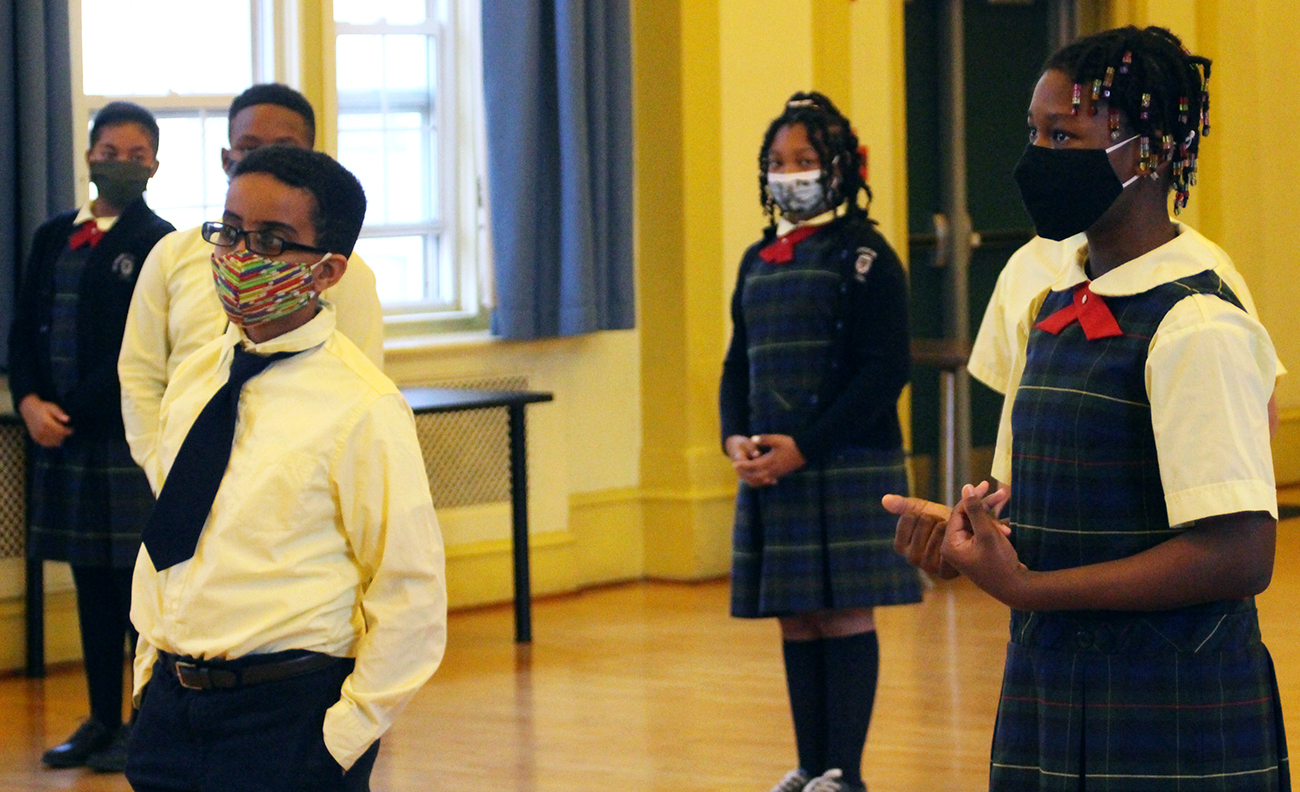 Students at St. Francis de Sales School in Philadelphia share their favorite aspects of the school’s curriculum before a Dec. 15 check presentation at which the school received $1 million from an anonymous donor. (Gina Christian)

Both EITC and OSTC offer a mechanism for supporting religious and other non-public schools without violating Pennsylvania’s version of what is known as a “Blaine Amendment.” Such legislation, named for a failed 19th-century attempt to enact a federal ban on public funding of religious schools, is currently found in 37 state constitutions.

Financial assistance is essential for 93% of St. Francis de Sales’ 462 students, said Sister Mary, adding that tuition is now more than $5,000 per student per year.

“We have children who desperately need this support,” she said. “Their parents do not want them take them out of this school; they want them here.”

And with good reason: St. Francis de Sales has to date produced eight graduates who were named Gates Millennium Scholars and received full scholarships to the colleges of their choice. The school partners with the nearby University of the Sciences for its STEM (science, technology, engineering and mathematics) curriculum, and with Villanova University for NovaCANE sessions, which bring university faculty and staff to the classroom to introduce students to structural, environmental, chemical, electrical and mechanical engineering.

With COVID, “half of the students are in person, and half are learning virtually,” said Sister Mary.

Sustaining students’ access to such educational opportunities during the pandemic and beyond was the driving force behind the donation, said Linda Camacho, a partner at Brinker Simpson and Company, the certified public accounting firm representing the donor.

Both Camacho and Brinker Simpson managing partner Robert Simpson were on hand Dec. 15 to represent the “camera shy” benefactor, who was familiar with St. Francis de Sales School and simply “wanted these children to continue their education here,” said Camacho.

Along with Downey, both accountants are themselves products of a Catholic education (Camacho graduated from then-Archbishop Prendergast, Simpson and Downey from Cardinal O’Hara High School) that they all agreed adds up to a strong start in life.

Downey pointed to the “discipline” and moral formation imparted through Catholic education, which can shape future generations – perhaps even leading some to follow the anonymous donor’s example.

“You would be surprised how generous a lot of people are,” said Camacho. “There are a lot of (benefactors) around, and they don’t want you to know.”