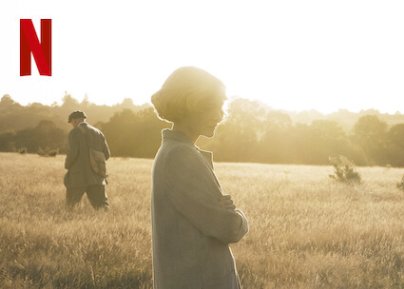 This is the movie poster for “The Dig” streaming on Netflix and starring Carey Mulligan and Ralph Fiennes. The Catholic News Service classification is A-III — adults. The Motion Picture Association rating is PG-13 — parents strongly cautioned. Some material may be inappropriate for children under 13. (CNS photo/Netflix)

NEW YORK (CNS) — The discovery of an ancient burial ground in southeastern England in 1939 was one of the archaeological events of the century, rivaling in historical significance the opening of the tomb of King Tutankhamun in Egypt.

A fictionalized version of this intriguing story is told in the aptly titled film “The Dig” (Netflix).

Inspired by the 2007 novel by John Preston, “The Dig” focuses on Basil Brown (Ralph Fiennes), a local excavator and amateur archaeologist who oversaw the project. He was scorned by museum experts for his lack of formal education, lowly social status and unorthodox methods. His contribution to the discovery was hidden from the public eye for decades.

Basil’s champion is Edith Pretty (Carey Mulligan), a wealthy widow who hires him to investigate the mysterious earthen mounds on her vast estate, Sutton Hoo. The project captures the imagination of her young son, Robert (Archie Barnes), who comes to regard Basil as a surrogate father.

A considerable volume of earth is moved, revealing the outline of a ship and a suspected royal tomb. That attracts bigwigs at the British Museum, and a snobbish director of that institution, Charles Phillips (Ken Stott), takes charge, bringing along a gaggle of assistants. They include a husband-and-wife team, Peggy (Lily James) and Stuart (Ben Chaplin) Pigott.

Director Simon Stone proceeds at a leisurely pace and a family-friendly period drama unfolds. Unfortunately, the plot diverts to explore Peggy and Stuart’s unhappy marriage. Stuart has a roving eye for his male peers, and a same-sex affair is implied. Meanwhile, frustrated Peggy is attracted to Edith’s dashing cousin, Rory (Johnny Flynn), who arrives to assist with the excavation.

It’s a shame that this extraneous material has been needlessly thrown into the mix, because viewers of all ages could otherwise have enjoyed a fascinating history lesson. In a flash, as we’re shown, the wealth of artifacts from Sutton Hoo changed the prevailing view that the Anglo-Saxons of the sixth and seventh centuries were crude aggressors.

“These people were not savage warriors,” Charles proclaims. “They were sophisticated people with remarkable artistry. The Dark Ages are no longer dark.”

As war is declared, the outlook is bleak and Edith’s health begins to fail, Basil sees Sutton Hoo as a symbol of hope. “From the first human handprints on a cave wall we’re a part of something continuous,” he tells Edith, “so we don’t really die.”

The film contains adulterous sexual activity, brief nudity and an implied homosexual affair. The Catholic News Service classification is A-III — adults. The Motion Picture Association rating is PG-13 — parents strongly cautioned. Some material may be inappropriate for children under 13.