In wake of Capitol attack, leaders urge rejection of divisions that lead to violence 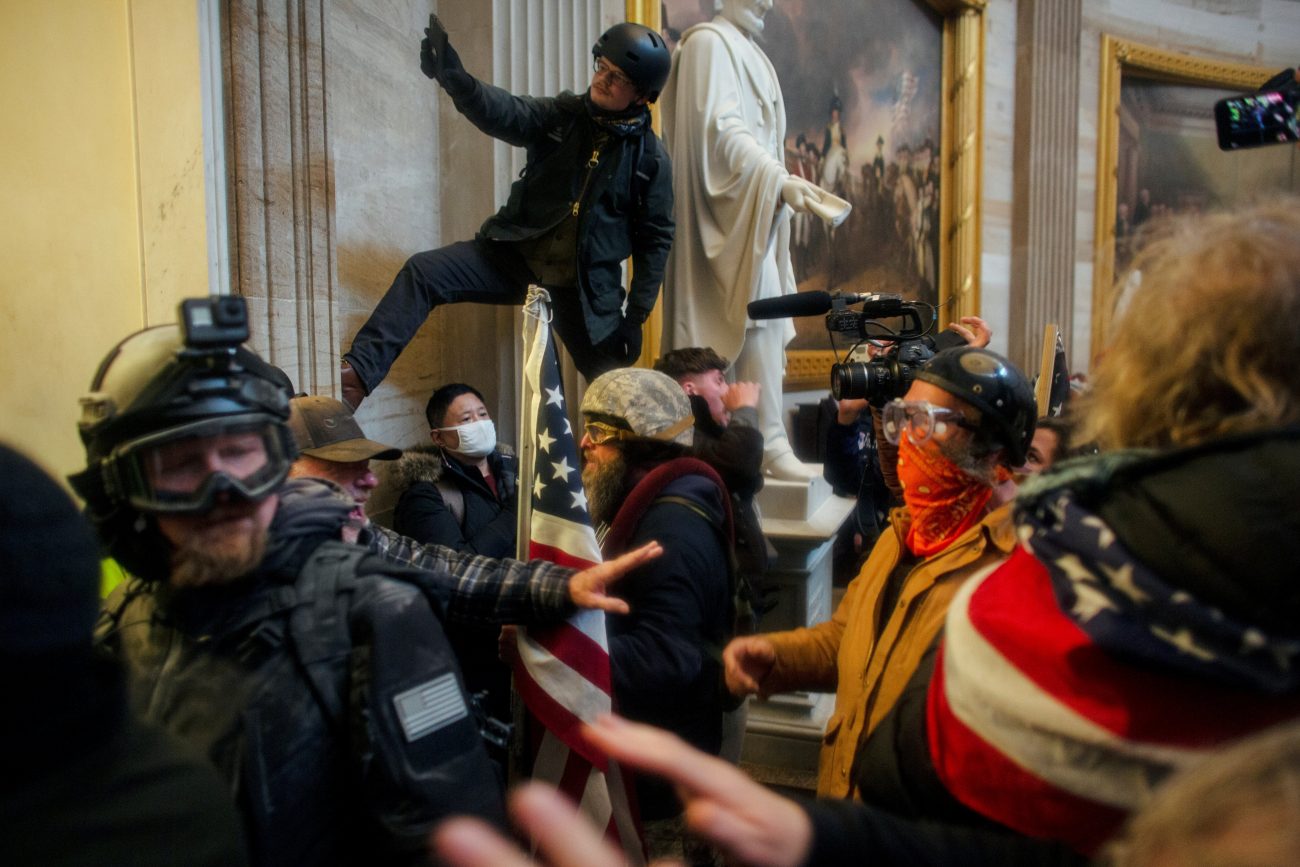 President Donald Trump supporters breach the U.S. Capitol in Washington Jan. 6, 2021, during a rally to contest the certification of the 2020 presidential election. (CNS photo/Ahmed Gaber, Reuters) Editor's note: No resales. No archives.

WASHINGTON (CNS) — Rep. Chris Smith was in his office in the Rayburn House Office Building, writing remarks to acknowledge the tally of the presidential election results when alarms sounded.

Will Sommer, a Georgetown University graduate who writes for The Daily Beast, an online news publication, was at the East side of the Capitol to cover what had been promoted as an organized protest when chaos quickly unfolded.

“When I heard the protesters had broken through outdoor fencing on the west lawn, I went there and saw thousands of people milling about on the grass,” he told Catholic News Service.

“People were urging one another to get up closer and fight Capitol Police and eventually, they did break through — something I could see from afar as Trump supporters climbed inauguration stands, waved Confederate flags from the front of the Capitol, and eventually scaled the scaffolding.”

The reaction to the violent invasion of the House and Senate chambers by supporters of President Donald Trump on Jan. 6, intended to disrupt the formal acceptance of Electoral College ballots, paralleled initial public response to the horror of 9/11. There was a numbing shock followed by anger and grief, and a search for anything that might be a solution.

Some of this frustration was highlighted in an editorial in the Catholic Herald, diocesan newspaper of Madison, Wisconsin, written by the newspaper’s editor, Kevin Wondrash.

“Some people who were on opposite sides of this debate last year during protests concerning issues of race seemingly have different opinions regarding protests in relation to (the Jan. 6) events. Some of them are even having their words and tweets used against them several months later to illustrate a double standard. Dialogue and discourse have become almost impossible to do.”

Smith, R- New Jersey, who is co-chair of the Congressional Pro-Life Caucus, echoed this sentiment in a Jan. 7 statement, saying: “The enactment of wise public policy to benefit all Americans requires robust dialogue and debate — and genuine respect for one another especially when there is fundamental disagreement. We must be committed to zero-tolerance toward violence in any form.”

Reactions from Catholic leaders stressed the need to reject political divisions that turn to violence.

“The violence witnessed in our nation’s capital … serves only to inflame our divisions and pit citizen against citizen at a time we need to be united,” Boston Cardinal Sean P. O’Malley said in a Jan. 7 statement. “We reject all forms of violence, including the acts of those who stormed our Capitol. We pray for those who lost their lives and for their loved ones and for the injured. We live in a divided nation and the challenges our nation faces are significant.”

The Leadership Conference of Women Religious statement said, “Our hearts ached as we watched these despicable actions that threaten not only to destroy the seat of our government but to rend the bonds that unite us. We commend and thank the members of Congress who courageously continued their service to the nation … even amid the chaos.”

“This hateful and intentional behavior, meant to disrupt the peaceful transfer of power that is central to our democracy, is deplorable and totally disregards Gospel values and the principles of other faiths and people of good will,” said a statement from the Sisters of Mercy of the Americas. “This deliberate assault on the soul of our nation shattered trust and common purpose while stoking suspicion, fear and division.”

“Regardless of political affiliation, we are united by democracy,” said Archbishop Nelson J. Perez of Philadelphia. “Should it devolve into what we witnessed — violent disorder and chaos — the rights we cherish will disappear into the abyss of anarchy.”

Ernesto Cortes, director of the West/Southwest Industrial Areas Foundation, which receives funding from the Catholic Campaign for Human Development, observed that the attempted insurrection “endangered our democratic institutions by introducing violence to what has, until now, been a tradition of a peaceful transfer of power in our national leadership. To arrive at consent at the point of a gun is the weakest form of power.”

The reaction from the Ignatian Solidarity Network called the violence “a testament to the ongoing reality of a culture of white supremacy. Attackers were permitted to enter the Capitol building with little resistance from police and security personnel, and one must not look far to see the contrast between this and the way that people of color are treated in our nation every day.”

A joint statement from the presidents of 28 Jesuit colleges and universities blamed the violence on President Trump “and his adherents”:

It said they “bear responsibility for perpetuating false rumors and unsubstantiated facts regarding the election. It is time that the president concede his loss to duly-elected President Biden and allow the smooth and peaceful transition of power, which will be completed on Jan. 20. As leaders of institutions dedicated to the promotion of justice and truth, we commit ourselves to working for understanding and reconciliation in the days ahead.”

“Today, we have to ask ourselves what’s next,” wrote Patricia McGuire, president of Trinity Washington University. “To do that, we have to be thoughtful and insightful about what led to this complete breakdown in public order. We know some of the issues — the virulence of white supremacy and racial hatred that courses through our society, the political ideologies that encourage some Americans to believe that others do not belong here, the misguided beliefs about individual rights prevailing over the common good, the political deals that sacrifice integrity to gain personal power.”

“We have to be honest about the fractures in our nation,” she concluded. 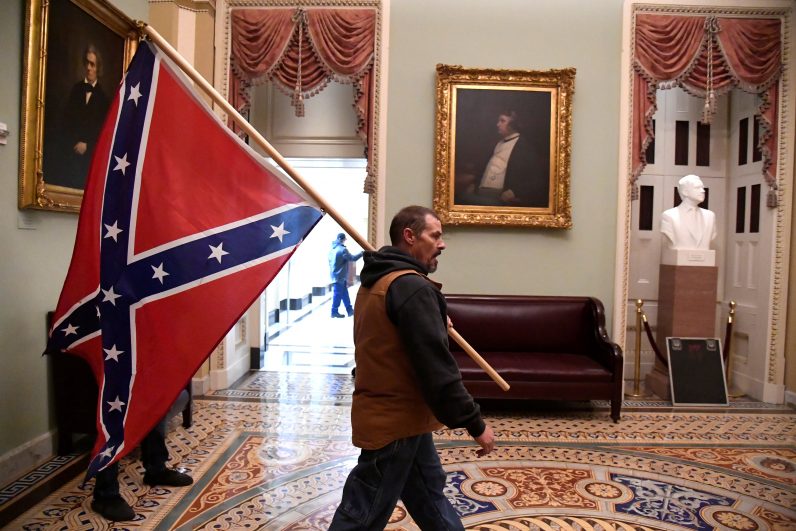 A supporter of President Donald Trump carries a Confederate battle flag on the second floor of the U.S. Capitol building in Washington near the entrance to the Senate after breaching security defenses Jan. 6, 2021. (CNS photo/Mike Theiler, Reuters)