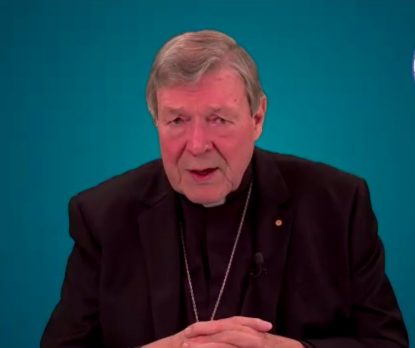 ROME (CNS) — While questions remain about dubious financial dealings in the past and about future uncertainties due to the COVID-19 pandemic, the Vatican’s steady move toward financial transparency is on the right track, said Cardinal George Pell, former prefect of the Vatican Secretariat for the Economy.

During a Jan. 15 webinar on transparency in the Catholic Church, Cardinal Pell said that Pope Francis’ efforts to reform the Vatican’s finances, including a recent measure that removed financial assets from the control of the Vatican Secretariat of State, would hopefully bring much-needed accountability.

“There’s no doubt that if implemented appropriately and well, it represents massive, massive progress,” Cardinal Pell said at the webinar sponsored by the Global Institute of Church Management and the church management program at the Pontifical University of the Holy Cross in Rome.

In the new law, published Dec. 28, the pope ordered the Administration of the Patrimony of the Holy See, also known as APSA, to manage all bank accounts and financial investments belonging to the Vatican Secretariat of State.

The pope also decreed that the Secretariat for the Economy would monitor the administration of the funds made by APSA, which handles the Vatican’s investment portfolio and real estate holdings.

Among the questionable investments made by the Secretariat of State was a majority stake purchase in a property in London’s Chelsea district that incurred significant debt, which Cardinal Pell said could have been avoided.

“A good deal of the present troubles, especially the London troubles, they might even have been prevented,” he said. “They certainly would have been recognized earlier.”

During his time as prefect of the Secretariat for the Economy, he added, who was “controlling sections of the money” was a “secondary issue,” because what truly mattered “was that it was managed well, that the money wasn’t wasted, (and) that we were getting a good return on our investments.”

“The Vatican is not a big operation by world standards,” so the success of “this centralization with APSA depends how faithfully and competently it’s done, that it’s directly under the supervision and ultimately control” of the Secretariat for the Economy, he said; “the Secretariat for the Economy has got to have the effective power to stop things when they need to be stopped.”

He also highlighted the importance of the pope’s plan to “set up a single board of highly competent and expert people to manage the investments,” emphasizing that after the financial pressures caused by the current pandemic, it “will be absolutely vital.”

The Australian cardinal commented on the recent news that the Australian Transaction Reports and Analysis Centre (AUSTRAC) overestimated by the equivalent of more than US$1.5 billion the amount of money transferred from the Vatican to Australia between 2014 and 2020.

In December, AUSTRAC had reported that $2.3 billion Australian dollars (US$1.8 billion) in Vatican funds had been transferred in more than 40,000 transactions to Australia from the Vatican.

However, after it was discovered that the number was miscalculated due to a computer coding error, AUSTRAC amended its report and said there were only 362 transfers from the Vatican to Australia during that time, with a total value of AU$9.5 million.

Calling the error made by Australia’s financial watchdog “a spectacular error,” Cardinal Pell said Vatican authorities “were quite rightfully resistant and rather displeased by the accusation that AU$2 billion went through in that time” and that AUSTRAC’s clarification “is good news for the Vatican.”

“It looked as though Australia, and to some extent possibly New Zealand, has been a little bit wobbly and weak in their vigilance over money laundering but that’s for them to ascertain to what extent that is true. But all is not well there,” Cardinal Pell said.

“I must say, I wickedly took a little bit of consolation as a Vatican employee when I was to learn that AU$2 billion wasn’t money laundered” during the time he served as prefect of the secretariat, he said. “And also ‘schadenfreude’ — rejoicing in the misfortune of others — which is not recommended for us Christians.”

PREVIOUS: Christians must show world what journey to unity looks like, pope says

NEXT: Chaldean Catholics in Iraq praying that pope visit will be possible