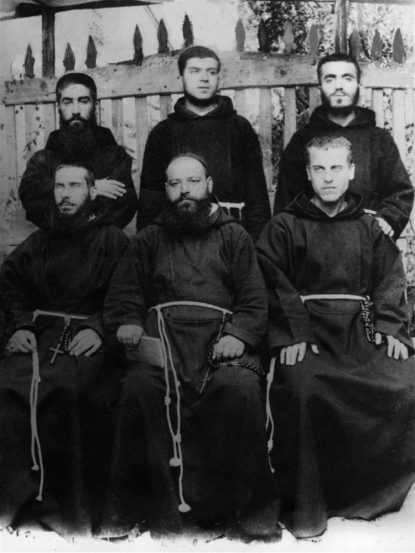 Capuchin Fathers Leonard Melki, top left, and Thomas Saleh, bottom right, are Lebanese priests who were martyred by the Ottoman Turks in 1915 and 1917 respectively. (CNS photo/Archives of the Vice Province of the Capuchins in the Middle East, Mteyleb, Lebanon)

BEIRUT (CNS) — Fares Melki’s first introduction to his great-uncle was when he asked his grandfather about the picture framed above his grandfather’s bed. That was around 60 years ago, when Melki was 10.

“It’s my brother, Padre Leonard. He was killed in Turkey,” his grandfather responded.

“And that was all,” Melki recounted to Catholic News Service from Baabdat, Lebanon, the birthplace of Capuchin Franciscan Father Leonard Melki and his fellow Capuchin and martyr, Father Thomas Saleh.

About 10 years later, Melki bought a book about the Armenian genocide and discovered that it included passages from the diary of Father Leonard Melki.

Meanwhile, Lebanese Capuchin Father Salim Rizkallah had been appointed vice postulator of the sainthood cause of Armenian Catholic Archbishop Ignatius Maloyan of Mardin, Turkey. In his research, Father Rizkallah learned that Father Melki was among the more than 400 Christians martyred with the archbishop in Turkey 1915. Father Saleh was killed two years later.

Melki said he felt driven by a need to show the world the importance of his great-uncle’s sacrifice. He has developed a website about Father Melki in Arabic, French and Spanish at www.leonardmelki.org.

In 2000, during a pilgrimage to Rome for the Jubilee Year, Melki and his sister, Sola, visited the archives of the Capuchin Friars at the Convent of San Lorenzo da Brindisi outside of Rome to research additional documents for the cause. Father Rizkallah urged Melki to be careful because the underground archives lacked ventilation and, according to legend, someone had suffocated there.

“We spent all day there, every half hour going outside for some fresh air,” Melki said. They gathered and photocopied 613 pages of documents.

“With these documents, we wrote the first draft of the positio,” a summary of the volumes of records to be presented to the Vatican for the two priests’ sainthood causes.

Research showed that, as a young priest, Father Melki was sent to eastern Turkey to manage the friary’s schools and workshops. When World War I began, he refused to flee his monastery in Mardin, instead choosing to stay behind to help an 80-year-old Italian colleague. When Turkish soldiers invaded the monastery a few months later in 1914, Father Melki’s first reaction was to hide the Eucharist in the neighbor’s house.

The Ottoman Turks captured Father Melki and imprisoned him, inflicting physical and psychological torture. They offered the priest mercy if he agreed to convert to Islam, but he refused.

They forced him to march from Mardin to a desert area, along with more than 400 other Christian prisoners, all of whom refused to convert to Islam. Among the Christian prisoners were Blessed Maloyan and other Armenian, Syriac and Chaldean Catholics. Father Melki marched at the front of the line along with two members of the Third Order of St. Francis.

The massacre took place June 11, 1915, the feast of the Sacred Heart. Father Melki was stabbed with a dagger in the heart. He was 34.

According to a book on the incident, one of the executioners said: “We have never seen people so strong in their faith. If the Christians had captured us and offered us the same chance to convert, we all would have become Christians.”

Father Saleh managed schools and oversaw activities of the Capuchin order in Turkish towns, including Mardin.

He had given shelter to an Armenian priest wanted by the authorities. But the Turkish police found out and captured Father Saleh, abusing him. He was forced to march from his convent at Urfa to Adana, but contracted typhus and died in prison in Marache, Turkey, Jan. 18, 1917. The apostolic nuncio to Turkey at that time wrote: “He was not afraid to die; his death was that of a saint. Blessed is he.”

Some say the two martyred priests are models for our time.

“Persecution of the disciples of Jesus is not over. It is everywhere in the world,” notes Lebanese Capuchin Father Tony Haddad, who was appointed collaborator for the cause of the two priests and who currently serves in Rome as assistant to the general postulator for the order’s many causes for sainthood.

“Look what ISIS did in the past years, and even in Europe, what happened recently in France and Vienna. It can happen to you and to me,” Father Haddad told CNS.

Noting that Father Saleh had written to his family at the beginning of World War I, “My life comes from God, he can take it whenever he wishes,” Father Haddad pointed out that “this is good to remember and to repeat now in this pandemic period while being prudent.”

Father Haddad has written a book about the two priests, soon to be published in Arabic. He noted that the late-October announcement of the beatification — the date of which has not been set — is confirmation that “Lebanon is still a land of saints.”

NEXT: Pope will not baptize infants on feast day this year