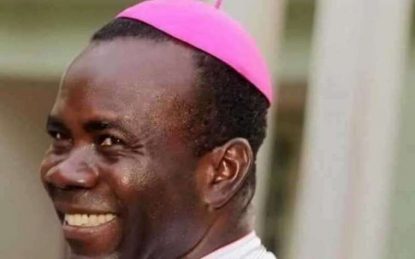 Auxiliary Bishop Moses Chikwe of Owerri, Nigeria, and his driver were released by their abductors Jan. 1, 2021, five days after they were kidnapped. Bishop Chikwe is picture in an undated photo. (CNS photo/Public Domain)

LAGOS, Nigeria (CNS) — Auxiliary Bishop Moses Chikwe of Owerri and his driver, Robert Ndubuisi, were released by their abductors Jan. 1 after being kidnapped five days earlier.

Archbishop John Obinna of Owerri said when he visited Bishop Chikwe at his residence, the bishop was “looking and feeling very weak from the traumatic experience.” He said the bishop’s driver had been taken to the hospital for treatment of a deep cut to his hand, received from the kidnappers.

The archbishop thanked state authorities and security agents for their work to get the two men released.

The 53-year-old bishop lived and worked in Southern California from 2005 to 2017. He completed a master’s degree in educational administration at Loyola Marymount University in Los Angeles and a Ph.D. in education at the University of California at Los Angeles. He was appointed auxiliary bishop of his home archdiocese in 2019.

Bishop Chikwe’s kidnapping came less than two weeks after the kidnapping and release in Imo state of Father Valentine Oluchukwu Ezeagu, a member of the Sons of Mary Mother of Mercy Congregation. The priest was stopped and taken by armed men Dec. 15 as he was driving to his father’s funeral in Anambra state, north of Imo. He was released unharmed the next day.

Bishop Chikwe remains the first Catholic bishop to be kidnapped in Nigeria since the Boko Haram insurgency began in 2009. Over the years, several priests and hundreds of others have been kidnapped. These included cases involving groups of school students.

NEXT: Lebanese man’s decades of research helps great-uncle’s sainthood cause