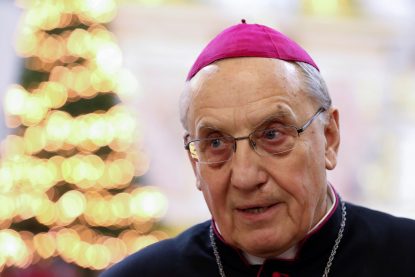 Archbishop Tadeusz Kondrusiewicz of Minsk, Belarus, speaks to reporters at his cathedral after returning to Minsk Dec. 24, 2020. Pope Francis has accepted the retirement of the archbishop, who had been banned from re-entering Belarus. (CNS photo/Stringer, Reuters)

VATICAN CITY (CNS) — Pope Francis accepted the resignation of Archbishop Tadeusz Kondrusiewicz of Minsk, Belarus, who had been blocked from entering his homeland for four months until negotiations between the Vatican and the Belarusian authorities allowed him back in time for Christmas.

The Vatican announced the archbishop’s retirement Jan. 3, the day the archbishop turned 75 — the age at which canon law requires bishops to turn in their resignation to the pope. It is unusual for the pope to accept the resignation of a bishop the day he turns 75 and for the Vatican to make such announcements on a Sunday.

The unusual nature of his immediate retirement led some to believe it was part of the agreement to allow his return to Belarus.

With the archbishop stepping down, Pope Francis appointed Auxiliary Bishop Kazimierz Wielikosielec of Pinsk as apostolic administrator of Minsk; he celebrated his 75th birthday in May.

The Catholic agency AsiaNews wrote Jan. 3 that in his 31 years as a bishop, Archbishop Kondrusiewicz “has been one of the main engines of the Catholic revival in the ex-Soviet world, reopening over 100 parishes, rebuilding dozens of Catholic churches and structures, including the seminary of St. Petersburg and that of Grodno, and finally becoming the symbol of popular protest against the last Soviet satrap, the Belarusian president Alexander Lukashenko.”

Archbishop Kondrusiewicz, who had gone to Poland in August, was blocked from reentering Belarus Aug. 31. The previous weekend, the archbishop had a statement read in Belarusian churches warning that the country could be on the brink of civil war because of violence and demonstrations protesting the Aug. 9 presidential election. Lukashenko declared himself the winner for a sixth term in the widely disputed election.

The archbishop’s treatment was seen by many as part of the effort by Lukashenko and his supporters to halt criticism of his government and to sideline those who might support people criticizing Lukashenko’s government.

The archbishop met privately with top officials from the Vatican Secretariat of State in Rome in mid-October, and Pope Francis sent Lukashenko a personal letter, hand-delivered Dec. 17 by Archbishop Claudio Gugerotti, nuncio to Great Britain and former nuncio to Belarus.

Five days later, the current nuncio, Archbishop Ante Jozic, announced that the government informed him that “Archbishop Tadeusz Kondrusiewicz has no obstacles to return to the territory of the Republic of Belarus.” Archbishop Kondrusiewicz was able to return in time to celebrate Masses Dec. 24 and 25 in his homeland.

Born Jan. 3, 1946, in Odelsk — a rural town near Belarus’ border with Poland, Archbishop Kondrusiewicz had served as president of the country’s bishops’ conference and had led the Archdiocese of Minsk, the capital of Belarus, since 2007.

Before that, he was the church’s top representative in European Russia; St. John Paul II had named him head of the restored apostolic administration of Moscow in 1991; the appointment made him the first resident bishop of Moscow in 55 years.

He had been ordained a bishop and named apostolic administrator of Minsk in 1989.

For six years before entering the seminary in Kaunas, Lithuania, he worked as a civil engineer in the Lithuanian capital, Vilnius. He once said the experience served particularly well in overseeing the rebuilding of scores of churches in his post-Soviet ministry.