Author brings St. Clare of Assisi out from shadow of St. Francis 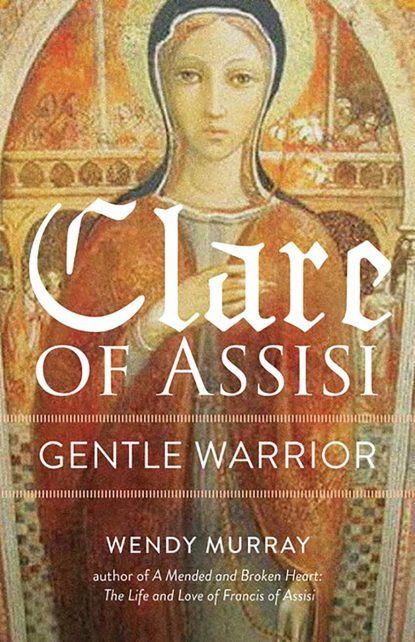 This is the cover of the book “Clare of Assisi: Gentle Warrior,” by Wendy Murray. The book is reviewed by Kathleen Finley. (CNS photo/courtesy Paraclete Press)

Who was St. Clare of Assisi when we look beyond her just being in the shadow of St. Francis’ gifts and charisma? Wendy Murray helps us to see what an amazing woman she was in her own right.

To her search Murray brings a woman’s sense of perspective, a journalist’s nose for a story, as well as a scholar’s thoroughness. (After more than a decade of research Murray also wrote “A Mended and Broken Heart: The Life and Love of Francis of Assisi.”)

From the time Clare ran away from her well-to-do family as a teen until the time of Francis’ death when she was in her mid-30s and then beyond until her own death, she rewrote the way women were seen. She had become bedridden by the time Francis died and was basically confined to her convent.

“Yet even from her bed, Clare … created new terms and differing themes for an existence that transcended the terms and themes of the Middle Ages and the rules of the church. … She scaled high mountains from the confines of a little room in a modest convent that rested on a sloping hill outside the small town that had been her home. She could no longer walk, and she had renounced the securities of her noble rank. Yet she turned her world upside down.”

Just as Murray points out that the usual picture attributed to Clare is not actually her but another woman of means who followed Francis, she helps paint a vivid image of a woman who knew her own mind and wasn’t afraid to use it.

For example, Clare kept a cat when that was generally not allowed among the followers of Francis, and she may have been the author of “The Legend of the Three Companions,” an important early source for Franciscan anecdotes, because of intimate information shared there that only someone quite close to Francis would have known.

Clare fought church authorities throughout her life, including several popes who would come to visit her, in order to keep the poverty that she and Francis so prized and not to have an endowment like the Benedictine model for convents for women. (That would change after her death.)

At one point, Clare advised her protege Agnes of Prague: “If anyone has said anything else to you or suggested any other thing to you that might hinder your perfection or that would seem contrary to your divine vocation, even though you must respect him, do not follow his counsel.” Clare was strong, clear, brave and uncompromising.

Francis and Clare had many similarities, from health issues that may have involved tuberculosis of the bones for both of them, a highly painful condition, to a deep love of poverty and a desire not to have much authority, which she was not able to avoid in her life.

While Clare and Francis had a deep closeness, they weren’t able to see each other many times, and both ended up getting largely written out of each other’s lives in later accounts. Thankfully, we have more of a picture now about Clare, due to this fascinating study.

Murray observes: “Clare and Francis were wrestling with the true, literal application of the life and teaching of Jesus regarding what it meant to follow him in real life. They did not equivocate or reduce his teaching to abstract principles.

“They did what Jesus said was necessary in order to be his disciples. Their embrace of a life of poverty — whether they realized it or not — called back something that had been lost almost to the point of extinction in the church, at least on the Italian peninsula. They were resetting the plumb line for what it meant to be ‘of Jesus.'”

Finley is the author of several books on practical spirituality, most recently “Holy Together: Reflections on Married Spirituality” and also “Savoring God: Praying With All Our Senses”; she formerly taught in the religious studies department at Gonzaga University.

PREVIOUS: Viewers journey with ‘The Father’ through dementia, in his eyes