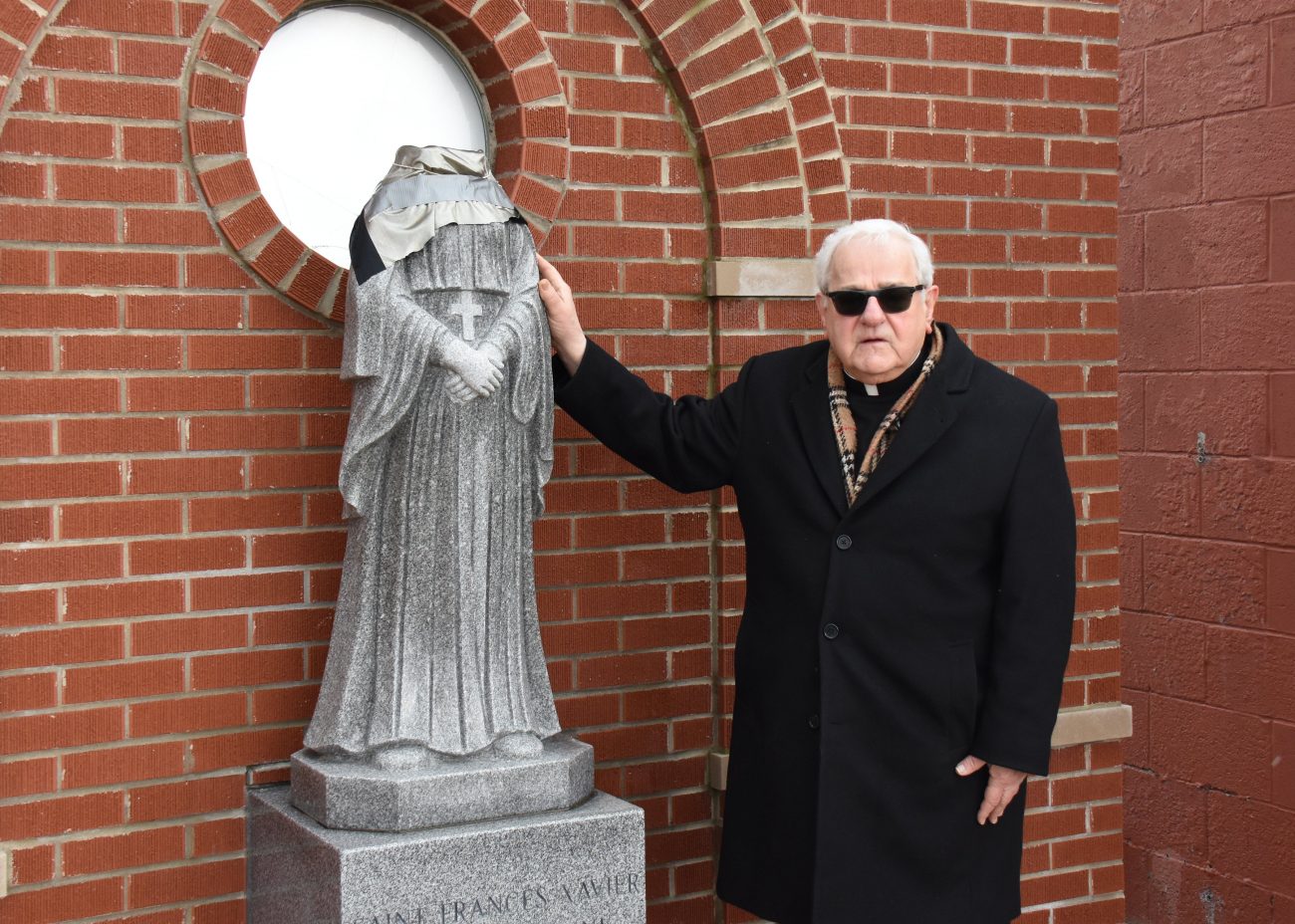 Msgr. Michael J. Carilglio, rector of Our Lady of Mount Carmel Basilica-St. Anthony of Padua Parish in Youngstown, Ohio, stands beside a statue that was destroyed at the basilica. (CNS photo/Robert Zajack via Catholic Exponent)

YOUNGSTOWN, Ohio (CNS) — Two days after the desecration of 16 statues on the grounds of the Basilica of Our Lady of Mount Carmel in Youngstown, parishioners who were gathered for Mass Feb. 28 expressed deep sorrow but also forgiveness for the perpetrator.

That day, Youngstown police had apprehended a suspect, Caleb Vancampen, 20, of East Palestine, Ohio, who reportedly confessed to the vandalism committed in the early morning hours of Feb. 26. Police said it helped that the suspect was caught on surveillance video.

Parishioners expressed their heartbreak and outrage in interviews with The Catholic Exponent, newspaper of the Diocese of Youngstown, over the sight of the destroyed statues.

“I hope that everyone in this church goes forward to pray for the person who did this,” said parishioner Paul Amon.

“Yes, I’m upset, but my heart goes out to the young man who did this,” said Therese Ivansin, parish director of religious education.

“What has he experienced in his life that would drive him to commit such an act and what can we do as a community to help bring about healing?” she asked.

“I don’t know what to say,” one visibly shaken parishioner noted in passing, as she shook her head following the regular 11 a.m. Sunday Mass Feb. 28 celebrated by Msgr. Michael Cariglio, rector of Our Lady of Mount Carmel-St. Anthony of Padua Parish. 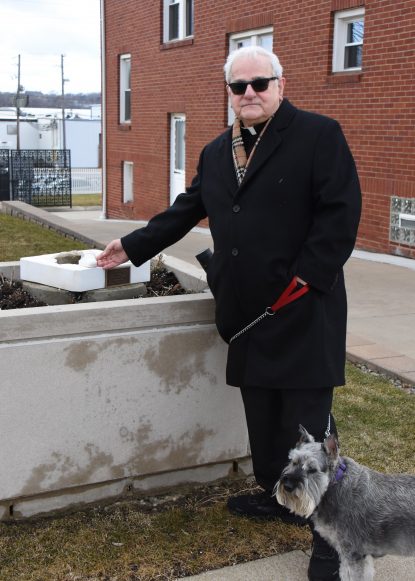 Msgr. Michael J. Carilglio, rector of Our Lady of Mount Carmel Basilica-St. Anthony of Padua Parish in Youngstown, Ohio, stands beside a statue that was destroyedon the grounds of the basilica. (CNS photo/Robert Zajack via Catholic Exponent)

“We took the smashed pieces and put them into storage because we didn’t want parishioners to see them,” Msgr. Cariglio said. He also put coverings over the statues that are still standing despite having been defaced.

“The damage is estimated at being just under $100,000,” Msgr. Cariglio noted. He had met earlier that day with an insurance representative and found that the insurance covers “present value minus depreciation,” which means “that we will take a hit financially.”

“Of course, the money is not the real loss,” Msgr. Cariglio noted, but “rather the tragic desecration (is).” Still, he called for forgiveness and healing, noting that members of Vancampen’s family had called him to express their remorse for his actions.

Youngstown Bishop David J. Bonnar visited the parish the day the vandalism took place to express his own sense of hurt and support, as did Msgr. Robert Siffrin, diocesan vicar general.

Such vandalism “really cuts to the heart of who we are and what we stand for,” Bishop Bonnar said.

“It’s truly an attack on the heart and soul of the people when their faith is not respected,” Msgr. Siffrin said. It is all the more shocking “because we live in a valley where there’s such respect for diversity and respect for faith.”

Such an attack on symbols of faith is “truly disheartening and disturbing,” he added.

Still, Bishop Bonnar was hopeful the parish and the larger Catholic community would recover. “The faith of the people here in Youngstown is very resilient — it’s strong.”

In his homily Feb. 28, Msgr. Cariglio expressed his gratitude to Bishop Bonnar and Msgr. Siffrin for coming by to express their support.

Referring to that day’s Gospel reading about the Transfiguration, Msgr. Cariglio compared the basilica of Mount Carmel to the mount on which Jesus was transfigured.

“Our parish is meant to capture the glory of God in today’s Gospel,” Msgr. Cariglio said, noting that the statues of Jesus, “the Mother of God, the saints and angels” in their own way reflect the glory of God.

He also cited Bishop Bonnar’s recent pastoral letter, “Testify to the Light,” in which the bishop cited the darkness afflicting the world and the church, and emphasizing the need for the church to witness to the light of Christ.

Msgr. Cariglio urged Catholics to actively engage in prayer — personal as well as sacramental and communal — and to testify to the light of Christ who “alone can dispel the darkness that prevails in the world.”

“Mount Carmel is a garden for the light of Christ through Mary,” Msgr. Cariglio said. Through its celebration of Mass, processions, socials and Italian festivals, the basilica continues “to build up the community of faith and family.”

Sheehan is the editor/general manager of The Catholic Exponent, newspaper of the Diocese of Youngstown.