After Bloody Saturday, Myanmar Catholics pray for peace amid tears 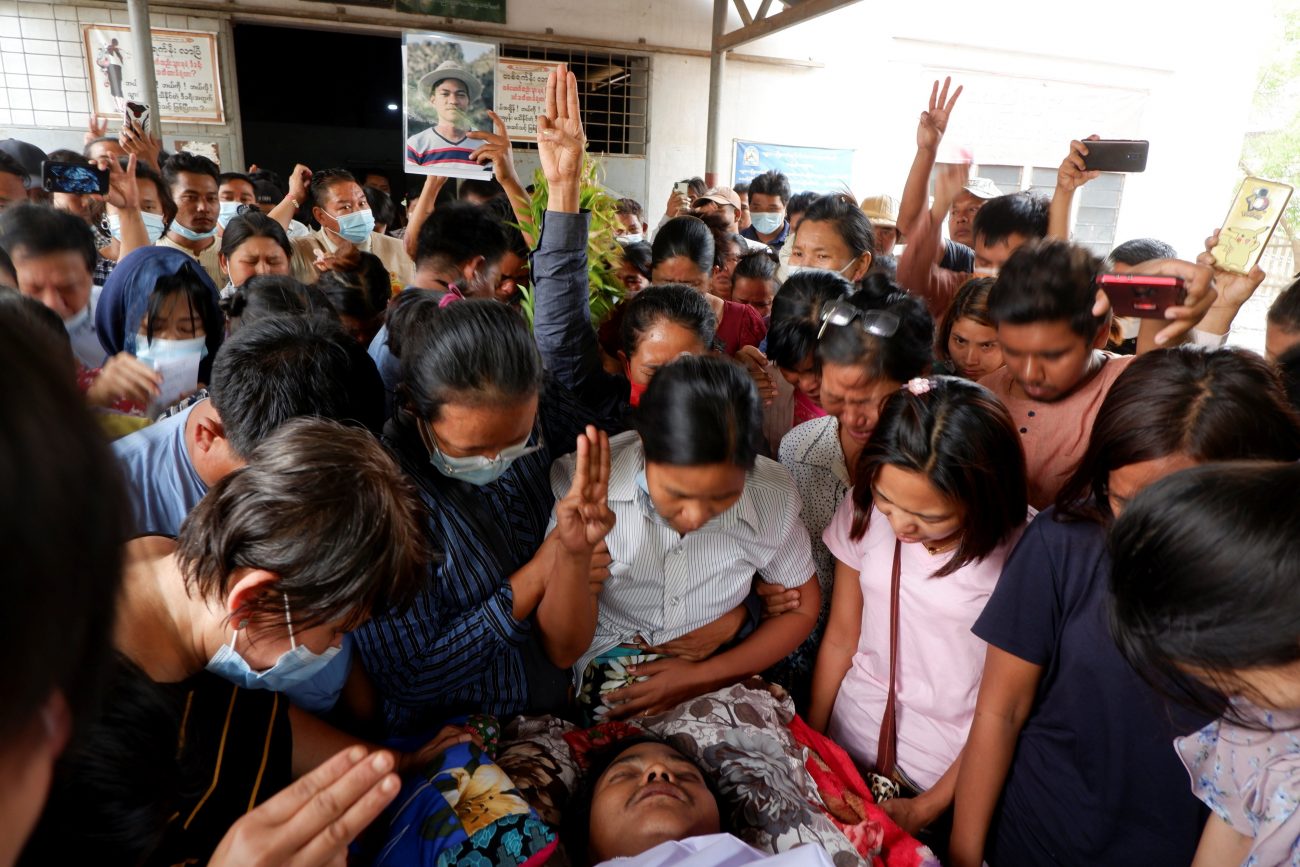 People mourn as they attend the funeral of Kyaw Win Maung in Mandalay, Myanmar, March 28, 2021. Win Maung was shot and killed by riot police during a protest against the military coup. (CNS photo/Reuters)

YANGON, Myanmar (CNS) — While Catholics in Myanmar observed Palm Sunday, many in the Buddhist-majority country were crying at the funerals of more than 100 people killed the previous day.

At least 114 people were killed by security forces March 27, the bloodiest day since the military seized power Feb. 1, reported ucanews.com. The day has been labeled Bloody Saturday.

Dozens of victims were bystanders — including children — who were not taking part in anti-coup demonstrations.

“As Christians, we ourselves need to practice the way of justice, and at the same time we need to fight against injustice,” the bishop said in a homily March 28.

At Palm Sunday Masses, priests prayed for those who died during the pro-democracy protests, ucanews.com reported.

Cardinal Charles Bo of Yangon recently demanded a stop to the killings in the streets of Myanmar. Pope Francis also has called for an end to the bloodshed.

The military, known as the Tatmadaw, has killed more than 450 people and detained at least 2,000 since the nationwide anti-coup protests began Feb. 6.

The March 27 crackdown took place on Armed Forces Day, formerly known as Revolution Day and a holiday honoring the Tatmadaw, which was founded by Gen. Aung San, the father of national leader Aung San Suu Kyi. Revolution Day marks the date in 1945 when Aung San began the resistance against the Japanese occupying forces during World War II.

The Tatmadaw showed its might and weapons during a parade in Naypyitaw, the remote capital. Most Western diplomats boycotted the event, although officials from other countries, including China and Russia, attended, ucanews.com reported.

The Tatmadaw justified its coup by citing voting irregularities in November elections that Suu Kyi’s National League for Democracy won by a landslide. Gen. Min Aung Hlaing, the coup leader, said the army was determined to protect people from all danger. He pledged to pave the way for democracy and hold new elections without giving an exact time frame.

Bloody Saturday drew strong condemnation from nations around the world and from 12 military chiefs from democratic countries, including Japan.

“A professional military follows international standards for conduct and is responsible for protecting — not harming — the people it serves,” military chiefs said in a statement.

The EU mission in Myanmar said “it’s a day of terror and dishonor” because the killings of unarmed civilians, including children, are indefensible acts.

Tom Andrews, special U.N. rapporteur on Myanmar, said it was time for the world to take action, if not through the U.N. Security Council then through an international emergency summit. He said the junta should be cut off from funding such as oil and gas revenues and from access to weapons.

Ucanews.com reported politicians, activists, students, journalists and ordinary civilians have been terrorized by the Tatmadaw. Soldiers raid homes late at night, randomly shooting at the houses.

Undeterred, young people continue to march into the streets to show their defiance against military rule.

“I believe we will reach our goal through perseverance, despite the journey being tough and facing more bloodshed,” said Sister Ann Rose Nu Tawng from Myitkyina, who knelt on the road to plead with security forces not to harm unarmed civilians in February and March.