No one can be excluded from the care, love of the church, cardinal says 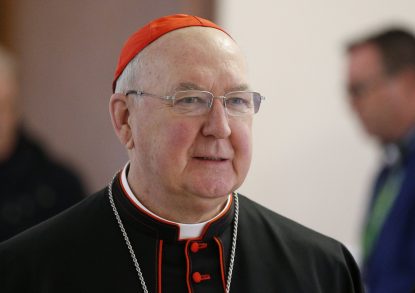 U.S. Cardinal Kevin Farrell, prefect of the Dicastery for Laity, the Family and Life, is pictured in Rome in this March 19, 2018, file photo. During a March 18 Vatican news conference on the “Amoris Laetitia Family Year,” Cardinal Farrell said that although the church cannot bless nonsacramental unions, the pastoral care of the church is always open to all people. (CNS photo/Paul Haring)

VATICAN CITY (CNS) — While the Catholic Church cannot bless unions that are not sacramental marriages, the church will always welcome and accompany everyone, no matter their situation in life, said the prefect of the Dicastery for Laity, the Family and Life.

“Nobody must ever be excluded from the pastoral care and love and concern of the church,” said the prefect, Cardinal Kevin J. Farrell, March 18 during an online Vatican news conference, presenting details of the “Amoris Laetitia Family Year,” which starts March 19.

The cardinal’s comments were in response to a question about the “disappointment” expressed in parts of the world regarding a recent statement by the Congregation for the Doctrine of the Faith, which said any form of blessing a same-sex union is “illicit.”

That statement, released March 15 and approved by Pope Francis, reiterated that homosexual men and women must be respected, but that it was not licit to impart a blessing on relationships or partnerships “that involve sexual activity outside of marriage — i.e., outside the indissoluble union of a man and a woman open in itself to the transmission of life — as is the case of the unions between persons of the same sex.”

While such unions may not be blessed, people may still receive a blessing as individuals, the statement said.

When asked if the unfavorable reaction by some to the doctrinal congregation’s statement could have any consequences on the dicastery’s work and plans for promoting a year dedicated to the family and conjugal love, Cardinal Farrell said, “I think that it is very important that we all understand that the pastoral life of the church is open to all people.”

What is not clear to most people and must be understood, he said, is that when the church talks about marriage, it is referring specifically to sacramental marriage. A blessing, he said, “is a sacramental that is related to the sacrament of marriage.”

But, he said, while the church can bless only a sacramental marriage, that does not mean only those who are married in the church “receive the benefits of the pastoral care of the church.”

People live and experience so many different situations, and no matter where they are in life, even when they cannot participate fully in the life of the church, “that does not mean that they are not to be accompanied by us and by the people of parishes,” the cardinal said.

“We accompany all people,” the cardinal said.

While special emphasis will be made on the beauty and importance of Christian marriage during the “Amoris Laetitia Family Year,” he said the many dioceses, associations, programs and movements that work with same-sex couples “will always work with them and accompany them.”

“There are situations where there are people who are divorced and remarried. The church will accompany them with the hope that one day they will live totally in accordance with the church’s teaching.”

“But I do want to insist that nobody, nobody must ever be excluded from the pastoral care and love and concern of the church,” he said.