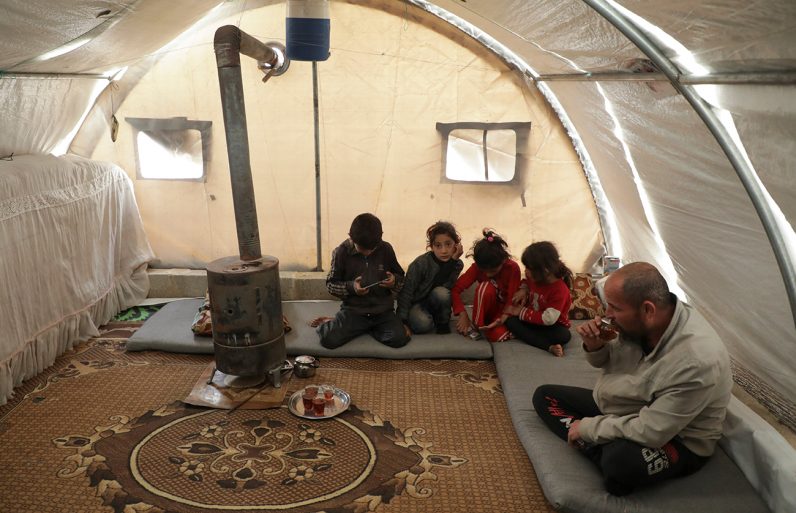 Mohammed Abu Rdan sits with his family inside a tent at a camp for internally displaced people, in Aleppo, Syria, March 11, 2021. As Syria marks 10 years of devastating conflict, the country is in economic and social shambles with millions of people displaced and millions more living below the poverty line. (CNS photo/Mahmoud Hassano, Reuters)

VATICAN CITY (CNS) — Food, cooking fuel, jobs and, especially, hope are hard to come by in Syria, said two Catholic leaders reflecting on the 10th anniversary of the war.

“We feel forgotten. The sanctions have thrown the country further into desperation: 83% of the population is below the poverty line. We can’t do it anymore. Enough,” said Maronite Archbishop Joseph Tobji of Aleppo.

“We feel abandoned by the international community,” he told Vatican News March 17. But he said he and his fellow Syrians were grateful for Pope Francis’ repeated calls for peace and for prayers.

The 10th anniversary of the war was March 15. In the past decade, an estimated 585,000 people have been killed and more than 11 million civilians have been displaced, including some 5.6 million Syrians who have sought refuge outside the country.

Vatican News marked the occasion by interviewing both Archbishop Tobji and Cardinal Mario Zenari, the apostolic nuncio to Syria since December 2008.

“Syria is no longer the country I knew when I arrived 12 years ago as apostolic nuncio,” he said. “Today, going out onto the streets of Damascus, I see long lines of people outside the bakeries patiently waiting their turn to buy bread at prices set by the state; often it is the only food they can buy. You never saw such scenes before, not even in the hardest years of the war.”

While it is true that several regions of Syria are no longer seeing bombing campaigns, he said, “what has exploded is what you could call the ‘bomb’ of poverty.”

“The Syrian pound has lost most of its value, and prices of basic goods have risen to the stars,” the cardinal said. “The people call this phase of the conflict the ‘economic war.'”

“Today there are fewer than a quarter of the Christians there were when the conflict began,” he said. “Young people and those who are skilled flee while the poor and vulnerable are left behind.”

“Despite everything, we are doing what we can to keep going,” he said. “But we are in a bad mood, we see no hope — and that’s true not only for Christians but for everyone.”

Archbishop Tobji also said he does not think most of the Christians who fled the country will return. “They are not happy in the new places that welcomed them, but they are not willing to return to this horrible hell.” 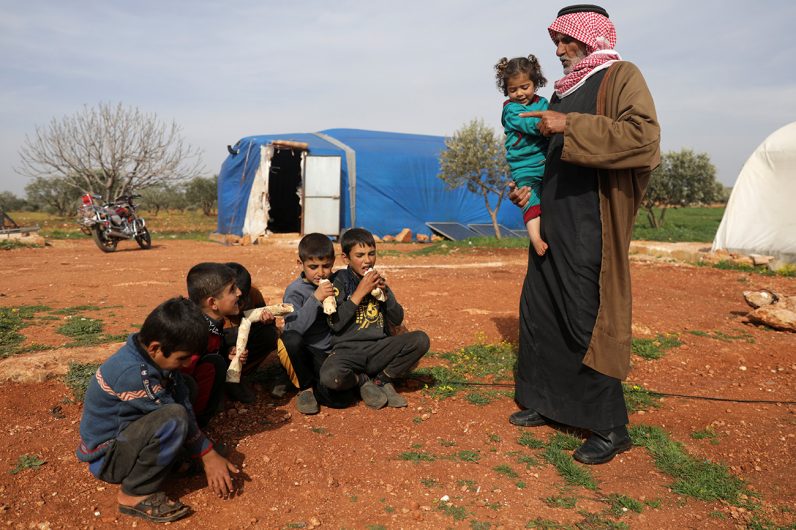 Abdel Razzak al-Khatoun, 84, a Syrian farmer, gestures as he talks with his grandchildren at a camp for internally displaced people in Idlib, Syria, March 11, 2021. As Syria marks 10 years of devastating conflict, the country is in economic and social shambles with millions of people displaced and millions more living below the poverty line. (CNS photo/Khalil Ashawi, Reuters)

PREVIOUS: No one can be excluded from the care, love of the church, cardinal says