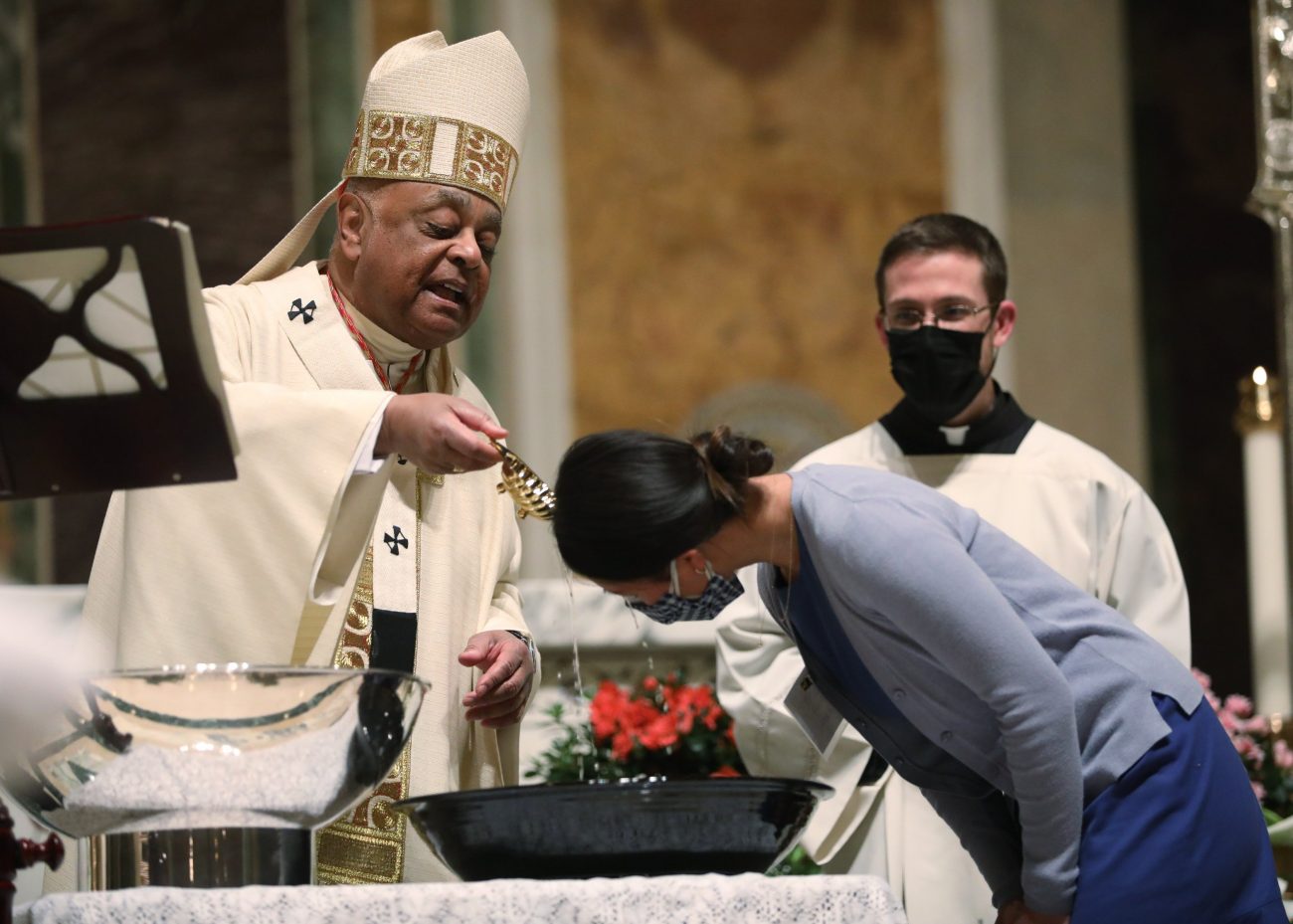 WASHINGTON (CNS) — The risen Christ on Easter offers hope to people experiencing sorrows in their everyday lives and in the midst of the coronavirus pandemic, Washington Cardinal Wilton D. Gregory said at an Easter Mass April 4 at the Basilica of the National Shrine of the Immaculate Conception.

“Easter is an unfolding experience of hope — hope at the very moment of grief,” Cardinal Gregory said in his homily, adding that “Easter is God’s remedy for the grieving heart.”

Washington’s archbishop noted that in the face of the current global pandemic, he as a priest continues to grieve for the sorrow of people who must bear the loss of their loved ones in isolation, as people died of COVID-19 without family members being able to be with them.

He said he knows that he will encounter the loss of more family and friends, and that he himself will die one day.

“Still, Easter promises me and it promises you that the fear and grieving that those moments will surely offer are not our ultimate human destiny,” he said, adding, “Mary Magdalene went to the tomb to grieve; she came away filled with hope and with joy.”

Cardinal Gregory said Easter “brings together many people who long to change their own sorrows to joy, their own doubts into hope and their own fears into faith.”

The message of Easter, he said, is that Christ is risen and death has been defeated.

“Easter gives us something to say in the very face of death: Life! Alleluia,” the cardinal said, concluding his homily. 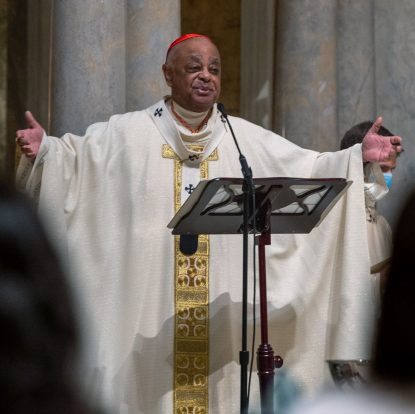 At the beginning of the Mass, Msgr. Walter Rossi, the basilica’s rector, looked out over the congregation and said: “After celebrating Easter last year in the midst of the coronavirus pandemic and the shrine being shut down and having no people here for Easter Sunday, it is fantastic, delightful, exciting to have you all with us on this Easter Day, as we celebrate the new life which the Resurrection brings.”

The noon Mass on Easter at the National Shrine was televised by EWTN. It also was livestreamed by the basilica and broadcast on The Catholic Channel on SiriusXM Radio.

People attending the Mass wore face masks and were at social distances from one another in alternating pews, in accord with COVID-19 safety protocols. The Mass opened with the joyful song, “Jesus Christ Is Risen Today.”

Prayers were offered at the Mass for those afflicted by the coronavirus that God will grant healing to the sick, strength to those who care for them, comfort to families and salvation to those who have died.

Other prayers offered were for government leaders to respect human life in all its stages and to uphold religious freedom and the sanctity of marriage; for Catholics to be inspired by the joyful celebration of Christ’s resurrection and share their faith with others; and for people in the Year of St. Joseph to emulate that saint’s unconditional trust in God.

The faithful also prayed for all who have died, including Capitol Police Officer William “Billy” Evans, who died April 2 after a man rammed a car into two officers at a U.S. Capitol barricade and lunged at them with a knife.

Earlier on Easter, Cardinal Gregory celebrated a morning Mass at the Cathedral of St. Matthew the Apostle, where at the Easter Vigil the previous evening, 16 people had received the sacraments of initiation, becoming full members of the Catholic Church. That Mass was livestreamed, as were the cardinal’s earlier Holy Week liturgies and the Easter Vigil at the cathedral.

“Our new Catholic brothers and sisters are a remarkable sign of God’s truth in our midst,” the cardinal said in his homily at the Easter morning Mass at the cathedral. “We welcome them as our beloved brothers and sisters in Christ. If you happen to run into any of our new Catholics during this next week or so, go up to them and say, ‘Welcome. We are so glad to have you as part of our family.'”

Cardinal Gregory in that homily said when people first hear the Easter story of the empty tomb and the heavy stones rolled aside and a white-robed angel speaking about the Risen one, that might seem like nonsense at first.

But he said that premises accepted as reasonable in today’s world — that acquiring wealth and influence can bring one happiness, or that there are no standards for a healthy family life, or that violence can solve problems and bring about peace — are actually nonsensical, as are realities like national division and racial polarization. 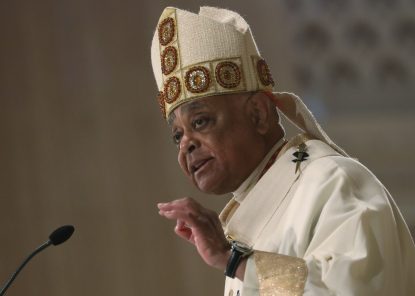 Washington Cardinal Wilton D. Gregory gives his homily at an Easter Mass April 4, 2021 at the Basilica of the National Shrine of the Immaculate Conception. (CNS photo/Jaclyn Lippelmann, Catholic Standard)

“Today is not about nonsense, but about the truth,” he said, adding that the women who first witnessed the risen Christ spoke the most profound truth.

“May the real truth that believers speak about and witness on this day illumine all our days and all our hearts with the light of Christ,” Cardinal Gregory said. “What the women said to the disciples was truth. What too many of us continue to pursue in our own lives is nonsense. Let’s get it right.”

At both Easter Masses, the congregations renewed their baptismal promises, and Cardinal Gregory walked down the center aisle, sprinkling holy water on people gathered there.

Near the end of the morning Mass on Easter at St. Matthew’s, Msgr. W. Ronald Jameson, the cathedral’s rector, said: “We all have so much to be grateful for this great gift of Easter.”

And Msgr. Jameson noted that day, April 4, marked the second anniversary of Pope Francis naming then-Atlanta Archbishop Gregory as the new archbishop of Washington in 2019.

Cardinal Gregory’s two years of leading the Archdiocese of Washington have been eventful.

After being installed as Washington’s archbishop in May 2019, he has led the archdiocese through the challenges of the pandemic this past year, and in November 2020, Pope Francis elevated him to the College of Cardinals, and Cardinal Gregory became the first African American cardinal in the history of the U.S. Catholic Church.

After the cathedral’s rector congratulated him for his anniversary, Cardinal Gregory expressed gratitude to his family of faith in the Archdiocese of Washington, saying, “Two years have flown by, and I couldn’t be more grateful to God for giving me you.” 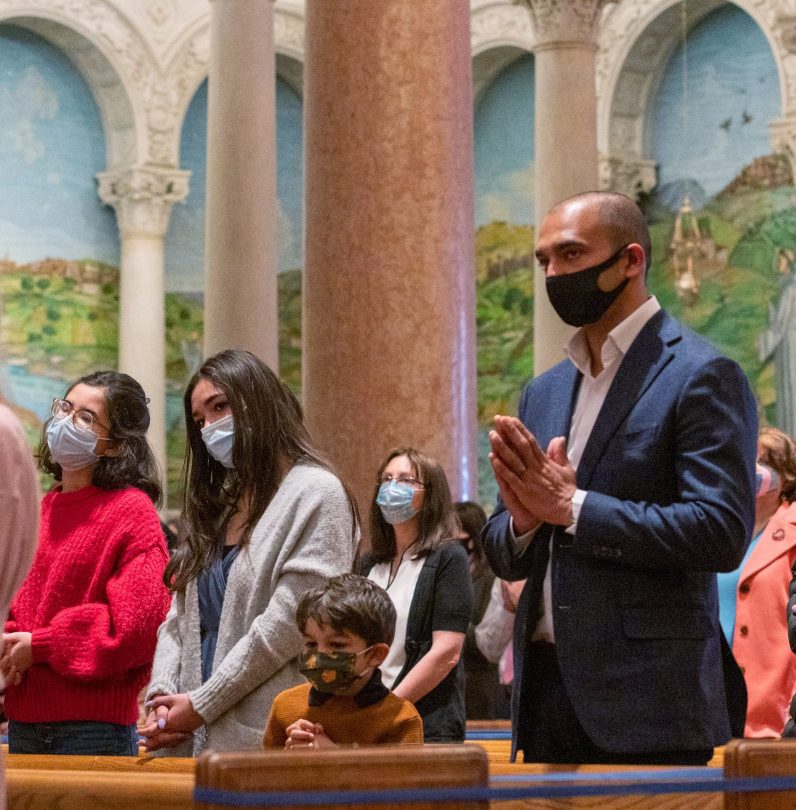 NEXT: Man with Down syndrome promotes jobs for ‘friends like me’