In times of trouble, church turns to prayer with Mary, theologian says 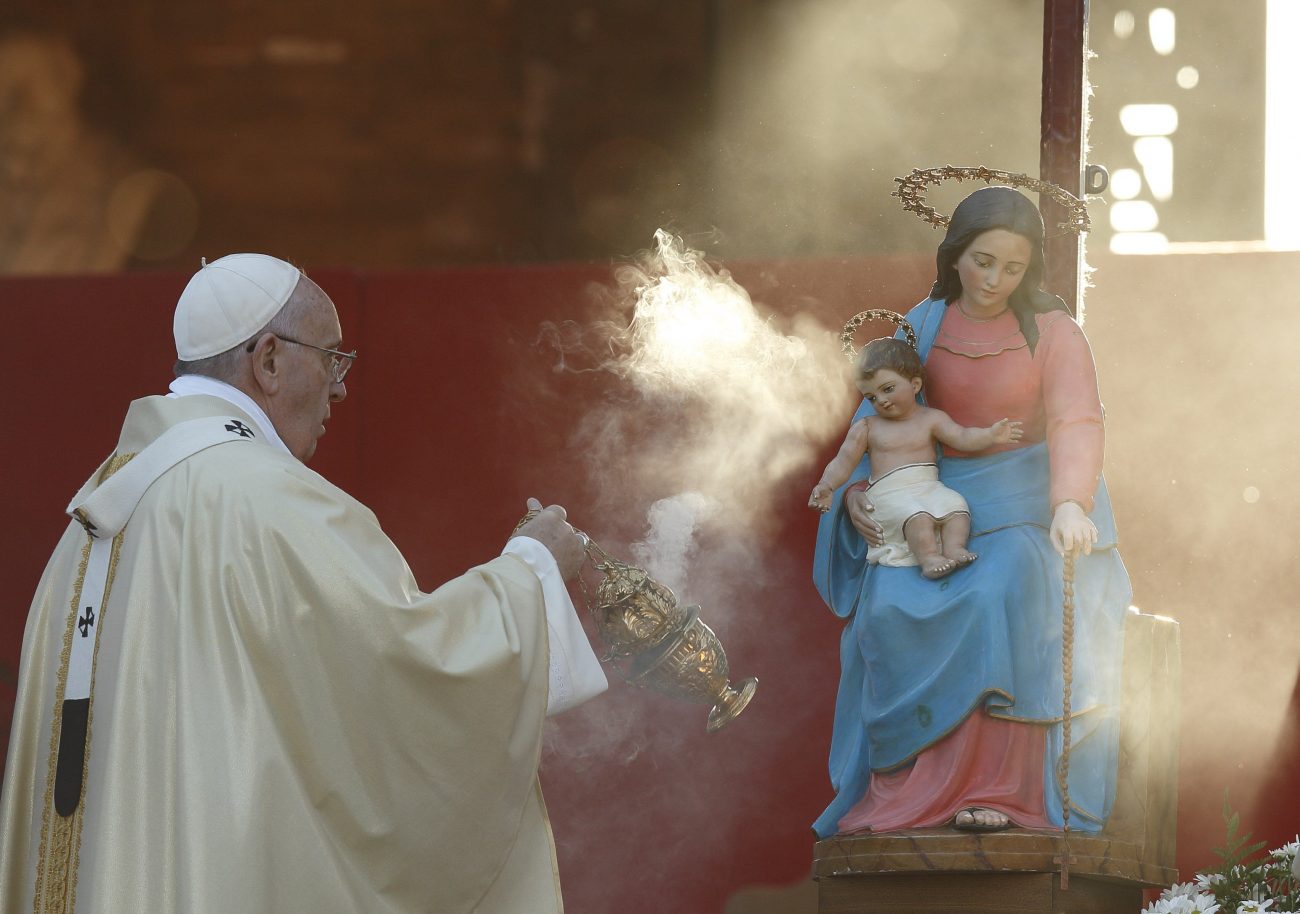 Pope Francis uses incense as he venerates a statue of Mary and the Christ Child during Mass at Verano cemetery in Rome in this Nov. 1, 2015, file photo. The pope has asked Catholics worldwide to pray the rosary every day throughout the month of May, pleading for an end to the pandemic and praying for those most affected by the disease and its consequences. (CNS photo/Paul Haring)

VATICAN CITY (CNS) — The global Catholic Church coming together to pray for an end to the coronavirus pandemic represents the hope and faith of the people of God and how they find solace and strength together with Mary, said a theological expert in Mariology.

“Mary knows what suffering is,” and just as she was at the foot of Christ’s cross, “she is at the foot of the many crosses other people bear, bringing them comfort, redemption and accompaniment in a self-centered world,” said Servite Father Salvatore Perrella, a professor of dogmatics and Mariology at the Pontifical Institute Marianum.

Pope Francis asked that Catholics unite worldwide every day throughout the month of May to pray the rosary, pleading for an end to the pandemic and praying for those most affected by the disease and its consequences.

“The pope did the right thing to call this marathon of prayer to Mary,” Father Perrella told Catholic News Service April 29.

“It’s not that Mary will fix our problems — God doesn’t fix them either because he gives us freedom and even leaves a disease free to act — but it is about knowing that God is with us, which is the reason for our great strength and hope,” he said.

The initiative is a way for people of faith to turn to the Mother of God, who assures people that God never abandons anyone, he said.

“This is the power of the Christian faith, which is solace, strength, compassion and solidarity in suffering” and helps find meaning in pain and difficulties, he said.

Our Lady does not take any honor or focus away from Christ, he said. The church emphasizes her role as “mother, sister and friend,” who always comes to help, “who prays for us” and who points to and “connects us to Christ and Christ responds to our human weaknesses.”

The rosary, Father Perrella said, “is a gentle chain that unites us to God, unites us to each other, and Mary is witness to this.”

Every shrine and sanctuary around the world has been invited to organize prayer initiatives according to their local customs, he said, and the places and people that can do so safely should take part.

Shrines represent places for coming together, of pilgrimage and leaving behind the repetitive mundanity of the everyday, he said. They are “a rest stop, a launching pad” for something more, because people need to come together at different times, different places and in different ways “and be together with others, with oneself and with God.”

“It is not to distance yourself, but to find in God all of humanity,” since shrines often attract so many different people who do not know each other, but they form “a crown of solidarity, of unity” just by being there, knowing that God is near, he said.

For those who cannot visit a shrine, the Vatican will be broadcasting on multiple platforms starting at 6 p.m. Rome time each day from a different shrine around the world.

People should take advantage of being able to connect with broadcasts and online, he said.

“It’s not true that the Internet is infernal. It depends on how it’s used and where you go,” the Servite said. “We have to use all tools so this encounter can happen and bring people together by what they see, unite their hearts” and join as one catholic family.

The theme of the month of prayer — “From the entire church an unceasing prayer rises to God” — is significant as well, he said. It refers to the miraculous event recounted in the Acts of the Apostles (12:1-12) when all the church prayed for Peter, who was imprisoned.

“We can see the pandemic is like a prison that we want with all our heart to break out of” and can make people lose hope, he said.

But instead, the Bible passage shows the entire church coming together to pray at a time of fear, danger and isolation, and God sends an angel to free Peter, illustrating how the Lord listens and performs an unexpected miracle.

Father Perrella said, “The church has a duty to express itself this way, in solidarity — the whole church. This is catholicity of faith: Everyone has to hear and feel the suffering of others” and do their part because from prayer comes true concrete acts of charity.

“But no matter what happens, what the result, the church must never give up hoping,” he said.

NEXT: Cardinal Burke, seven others rise in rank in College of Cardinals