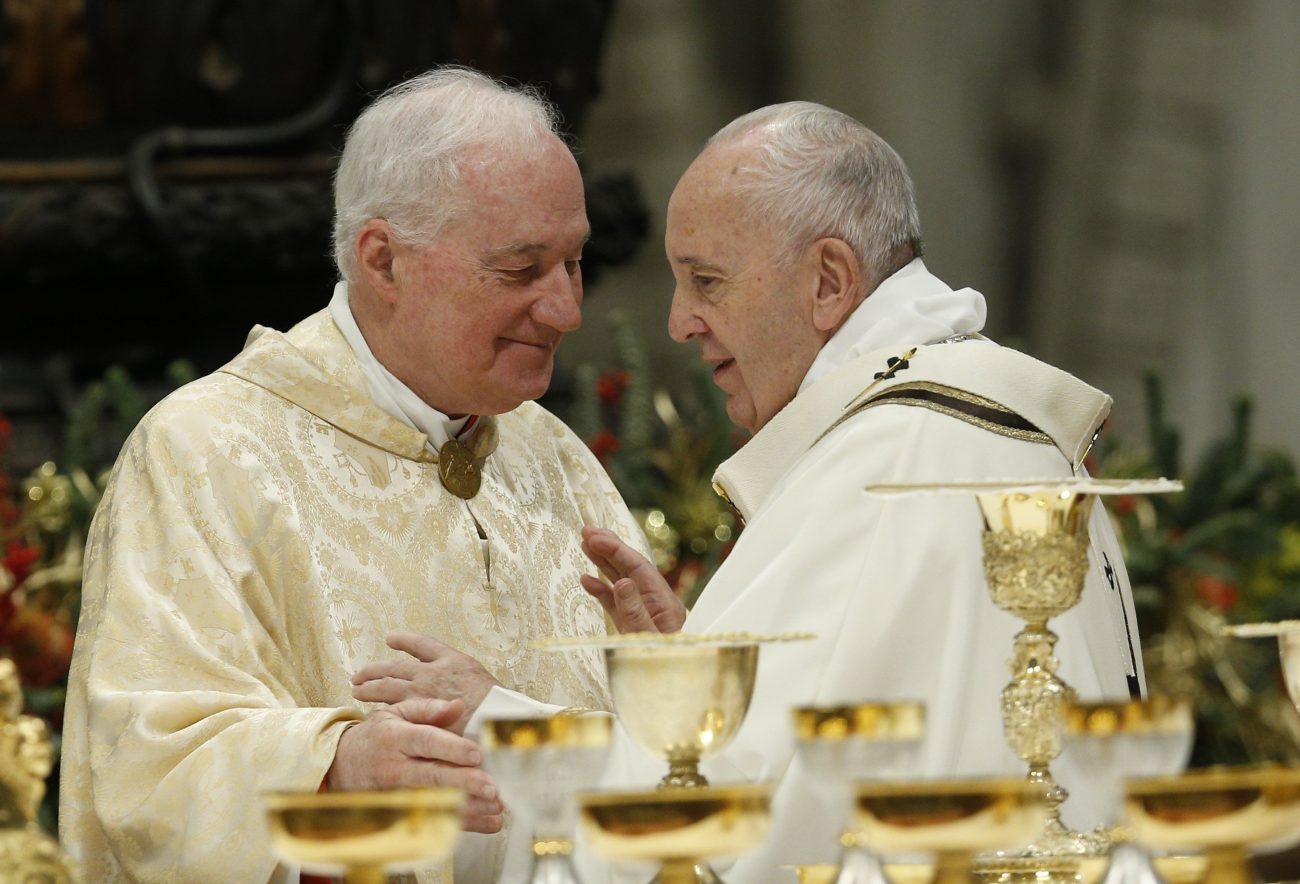 Pope Francis greets Cardinal Marc Ouellet, prefect of the Congregation for Bishops, during the sign of peace at a Mass in St. Peter's Basilica at the Vatican in this Jan. 6, 2020, file photo. Cardinal Ouellet announced plans for a major international conference at the Vatican in 2022 on the theology of the priesthood. (CNS photo/Paul Haring)

VATICAN CITY (CNS) — Increasing vocations to the priesthood, improving the way laypeople and priests work together and ensuring that service, not power, motivates the request for ordination are all possible outcomes of a major symposium being planned by the Vatican in February 2022.

“A theological symposium does not claim to offer practical solutions to all the pastoral and missionary problems of the church, but it can help us deepen the foundation of the church’s mission,” said Cardinal Marc Ouellet, prefect of the Congregation for Bishops and the chief organizer of the symposium planned for Feb. 17-19, 2022.

The symposium, “Toward a Fundamental Theology of the Priesthood,” seeks to encourage an understanding of ministerial priesthood that is rooted in the priesthood of all believers conferred at baptism, getting away from the idea of ordained ministry as belonging to “ecclesiastical power,” the cardinal said at a news conference April 12.

The three-day gathering, the cardinal said, is aimed specifically at bishops and delegations of theologians and vocations personnel from every country, although it will be open to other theologians and people interested in the topic.

The relationship between baptism and ordained ministry needs greater emphasis today, Cardinal Ouellet said, but reviewing the foundations of a theology of priesthood also “involves ecumenical questions not to be ignored, as well as the cultural movements that question the place of women in the church.”

The recent synods of bishops on the family, on young people and on the church in the Amazon all show the urgency of questions surrounding priesthood and relationships among people with different vocations in the church, the cardinal said.

Michelina Tenace, a professor of theology at Rome’s Pontifical Gregorian University, is helping organize the symposium and told reporters that going back to baptism and the priesthood of all believers “isn’t just a fashion, it’s the basis for all Christian life.”

Father Vincent Siret, rector of the Pontifical French Seminary in Rome, said a deeper reflection on priesthood — both the priesthood of all the baptized and ministerial priesthood — is essential for those engaged in training men for the priesthood.

“The baptismal life is the fundamental human vocation, and all must exercise the priesthood received at baptism. Ministry is at the service of this,” he said. “Reflecting on the fundamental theology of the priesthood will also make it possible to return to the justifications for priestly celibacy and the way it is lived.”

The Catholic Church requires most priests in its Latin rite to be celibate. While Cardinal Ouellet, Father Siret and Tenace all mentioned the importance of celibacy in the Latin rite, none of them mentioned the traditions of the Eastern Catholic churches that continue to have both married and celibate clergy.