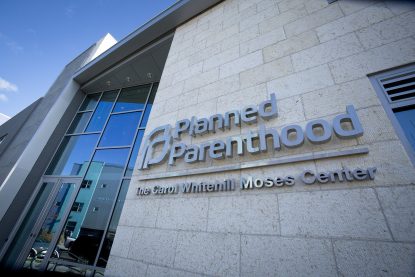 A Planned Parenthood facility in Washington is seen in this file photo. (CNS photo/Tyler Orsburn)

WASHINGTON (CNS) — The same day the U.S. Supreme Court announced it will hear a Mississippi appeal of a lower court’s decision to strike down the state’s 15-week abortion ban, it dismissed suits against a Trump administration Title X policy.

That policy enforced an existing Title X ban on family planning funds being used for abortion or abortion referrals.

May 17 also was the final day for public comment on the Biden administration’s proposed rule to end the Trump policy known as the “Protect Life Rule.”

Under the Biden proposal, Title X funds could again be used by health care services for low-income patients to perform abortions or to refer patients to abortion providers.

A May 3 letter to the court from the Office of the Solicitor General said the U.S. Department of Health and Human Services expects to announce the final Title X rule in December.

According to representatives of pro-life groups, this revision process has been rushed and the new rule as proposed would obliterate conscience rights. They made the comments at a May 17 online news conference hosted by the Ethics and Public Policy Center in Washington.

“From the start, Congress was very clear that none of these funds be used to fund abortion,” said Valerie Huber, a former acting deputy assistant secretary in the HHS Office of Population Affairs. “When Congress mandates something, HHS has neither the authority or freedom to choose what to ignore.”

Forcing religious family planning providers out of Title X “would limit options for women,” she said. “And it’s also illegal. Title X should not be used to punish people of faith.”

Title X, enacted by the Family Planning Services and Population Research Act of 1970, currently provides about $286 million a year for reproductive health care for low-income patients, in addition to wellness exams, cervical and breast cancer screenings, contraceptives, and testing and treatment for sexually transmitted infections.

Section 1008 of the law states that “none of the funds appropriated under this title shall be used in programs where abortion is a method of family planning.”

In February 2019, the Trump administration implemented the “Protect Life Rule” enforcing that ban, and the 9th U.S. Circuit Court of Appeals upheld the rule in February 2020.

Under the Trump-era rule, Title X grant recipients may provide a list of health providers to a patient, but only a minority of the health care providers on any list provided to patients may perform abortions, and the list may not identify which providers perform them.

Grant recipients that also perform abortions must impose a “clear physical and financial separation” between any family planning program funded by Title X and abortion services.

“In our view, the proposed rule fails to faithfully carry out Congress’s command that the Title X program not provide or promote abortion or engage in abortion-related activities,” the letter states.

“Although the USCCB continues to have grave reservations about government promotion of contraceptives,” it says, “we have long supported enforcement of the abortion-funding restrictions in Title X, and we believe it critical that HHS fulfill its obligation to fully enforce those restrictions.”

The letter also asks “that the regulations expressly mention the right of individuals and grantees not to counsel or refer for abortion, a statutory right recognized in the preamble to the proposed rule.”

“Lastly,” it says, “we ask that the regulations expressly incorporate the existing requirement that Title X projects encourage family (including parental) participation in the decision to seek family planning services, a statutory requirement also recognized in the preamble.”

This requirement, imposed by Congress, “reflects the common sense notion that, as the primary teachers and caregivers of their children, parents should be involved in any decision regarding their children’s own health and care,” the letter adds. “For some reason, however, this requirement was omitted from the proposed rule.”

“From day one, the Biden-Harris administration has pushed a radical and deeply unpopular agenda on abortion,” said a statement from Marjorie Dannenfelser, president of the Susan B. Anthony List. “President (Donald) Trump’s ‘Protect Life Rule’ sought to honor both the plain statutory language and the will of Americans of all stripes who oppose using taxpayer dollars to fund abortion on demand.”

“This government subsidization of abortion has no official legislative mandate,” said Tom McClusky, president of March for Life Action, in an email. “The Title X authorization lapsed in 1985, yet the funding has continued to the present day. Despite all of this, the Biden administration wants to open up this Title X funding to the abortion industry.”

NEXT: Brooklyn Diocese reports attacks on crucifix, statue over weekend