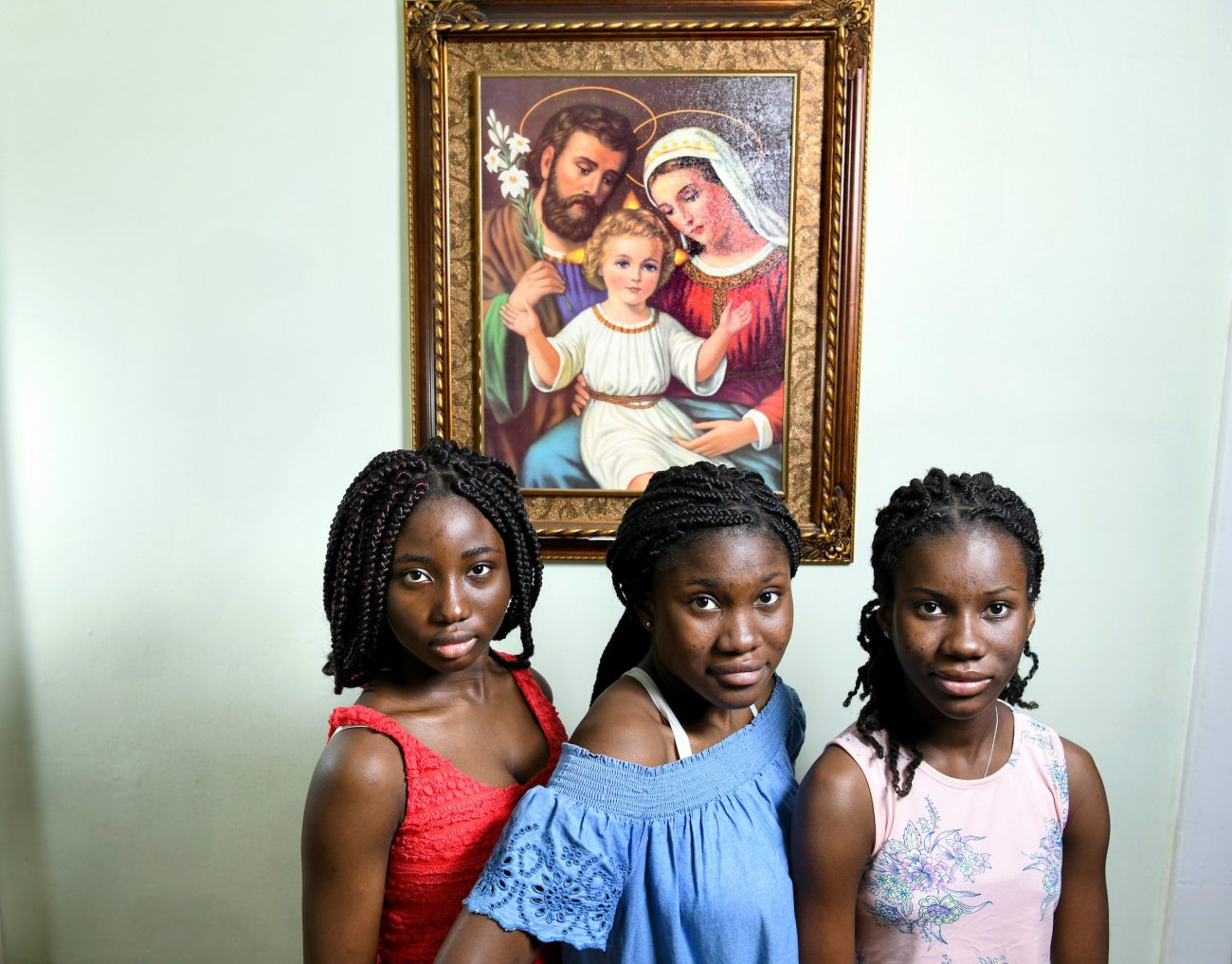 The Niangoran sisters pose for a photo at their house in Troy, N.Y., April 14, 2021. Naomi, 17, Sephora, 16, and Melissa, 12, were baptized at Our Lady of Victory Church in Troy during the Easter Vigil April 3. The three sisters, their father and another sister are from the Ivory Coast and recently came to live in New York. (CNS photo/Cindy Schultz via The Evangelist)

TROY, N.Y. (CNS) — Just a few seconds after walking into her home, there is no doubt that Sopia Grate is Catholic.

Each room holds a photo of Jesus or Mary, and in her front window sill is a display of Jesus, lined with roses and candles of saints in a homemade shrine.

Similarly, photos of her daughter, Chelsea, are hung around the room, with a special shelf just for her many awards: NAACP member of the year at State University of New York Cortland, an outstanding academic achievement award and an outstanding student leader award, just to name a few. Any more awards, and she’ll need another shelf.

On her fridge, she tacks the many similar accomplishments of her nieces along with photos of friends and family.

Perhaps the most Catholic aspect of the house is its neighbor: Our Lady of Victory Church in Troy is located right across the street. It’s less than a 30-second walk from her home to the parish’s front doors on Sunday morning, which is convenient for Grate, who attends Mass regularly.

Having a strong connection to her faith is important to Grate. Born in the Ivory Coast in West Africa, she spent her life trying to move her siblings and their children to the United States for a better life.

“For them to come here, they had to be baptized,” Grate told The Evangelist, newspaper of the Diocese of Albany, New York. All the girls were raised in the Catholic faith, but only Audrey was baptized in the Ivory Coast. Grate set out to change that.

Grate got in touch with Vici Armsby, pastoral associate for faith formation at Our Lady of Victory, about enrolling the three girls in the Rite of Christian Initiation of Adults program. Coming from the Ivory Coast, all of the girls spoke French and were just learning English. But that didn’t stop them.

Between overcoming a language barrier and adapting to a new country during a global pandemic, Armsby was inspired by how the sisters dove into their faith. “These are the times that Jesus is always with us,” Armsby said.

On April 3, at Our Lady of Victory’s Easter Vigil, Naomi, Sephora and Melissa received the sacrament of baptism. “I was nervous but excited,” said Naomi. All the sisters echoed that the experience of being in the spotlight was nerve-wracking, but it was thrilling to fully enter the faith.

Born and raised in Abidjan, a city on the southern coast in the Ivory Coast, Grate made a living selling women’s cosmetics. It was successful, but not enough.

Still, the United States held more opportunities than her hometown. One day, she went to her local church and prayed for guidance: “I said to God, ‘Whatever way you want to send me, let me go.'” She later filed for a tourist visa to the United States: “I just packed up and said goodbye,” she said.

In 1989, she made her move to the United States, landing in downtown Albany. Similar to her house in Troy, her first home was directly across the street from a church. Grate knows it was a sign. “God has angels everywhere I go,” she said. “Everywhere I move, I am by a church.”

Back in the Ivory Coast, the four sisters recalled seeing their aunt post photos of her life in America on Facebook. It made them even more curious about coming to New York.

“When I was in my country, I would see some of the photos and I dreamed about that,” Audrey said.

Naomi, much like her other sisters, said that they loved their home country, but they were curious to move to the United States. “I was excited to come,” she said.

It took over eight years for Grate to sponsor her brother and her nieces to come live with her in the U.S., but eventually the family made it over. After their arrival, it wasn’t long before Grate introduced the girls to Armsby and Sara Detmer, their catechist for faith-formation classes.

Armsby didn’t want to give the sisters another language hurdle to take on, since they were still learning English, so she reached out to a Catholic publishing company in Canada and ordered some faith-formation books in French.

Detmer, who is fluent in French, said the girls picked up everything quickly and were comfortable enough to switch to English after a few months.

“They are so kind and always empathizing with people, praying for people,” Detmer said. “I just think they have an amazing faith. That’s what I got from working with them.”

Detmer worked with the sisters in person until mid-March 2020 when they switched to virtual classes because of COVID-19. Still, Detmer said the family was always present and curious.

“They were such a dream to work with and I was so proud of them,” she said. “I cried when they made their sacraments; they’re fantastic.”

Now, the girls are focusing on the next steps in their faith and their lives, Audrey, a senior at Troy High School and graduating in May, plans to continue her education at Hudson Valley Community College. All the girls have high hopes for their future, from becoming a doctor to going into space as an astronaut.

Audrey hopes to become a judge, and graduating from high school, is just one step toward the goal: “It’s like a dream come true,” she said.

Benson is a staff writer at The Evangelist, newspaper of the Diocese of Albany.

NEXT: Pro-life leaders say HHS should not do away with Trump-era Title X rule