Seminarian killed in accident is recalled as ‘prayerful and loving’ 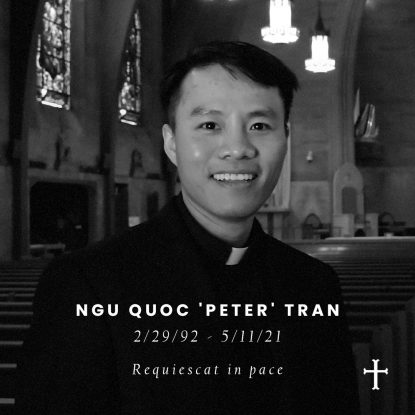 Ngu Quoc Tran, known to his friends as Peter, is shown in a photo from the Facebook page of the Diocese of Metuchen, for which he was a seminarian. He was killed in a hit-and-run accident May 11 while walking in New York City.

PISCATAWAY, N.J. (CNS) — A seminarian from the Diocese of Metuchen, New Jersey, was killed in a hit-and-run accident in New York City, the diocese reported.

Ngu Quoc Tran, known as Peter by friends and classmates, was killed while walking on Manhattan’s East Side the evening of May 11.

Tran was one of 24 seminarians for the Diocese of Metuchen, N.J., the most for it in 25 years. Bishop James F. Checchio was scheduled to celebrate a funeral Mass for Tran May 19 at the Cathedral of St. Francis of Assisi in Metuchen.

“Any time we hear of the sudden loss of life, especially the loss of someone so young, it is heartbreaking,” Bishop Checchio said in a news release from the diocese.

“But the tragic loss of Peter — the loss to his family, to his brother seminarians and to our local church — is immense,” he said, “and would be insufferable without our Catholic faith and trust in our heavenly Father, so I ask you to please join me in praying for Peter, his family and the many affected by this terrible loss.”

He was walking when he was hit by a driver who appeared to be intoxicated, according to reports. The driver fled the scene and was arrested hours after the accident when his car was involved in another collision. The vehicle was identified as the one that hit Tran.

After hearing news of the accident, Bishop Checchio offered a prayer and then drove to the seminary, where he celebrated Mass and visited seminarians.

Father Mauricio Tabera-Vasquez, vocations recruiter for the diocese, and Father Peter Tran, pastor, Our Lady of Czestochowa Parish in South Plainfield, New Jersey, and coordinator of the diocesan Vietnamese Apostolate, also went to the seminary and concelebrated the Mass.

“Peter was a prayerful and loving person who was always at the service of others,” Bishop Checchio said. “He was well-known in our parishes and was a welcoming face always talking with parishioners after Mass and building friendships with those serving in parish ministries. He will be incredibly missed in our diocese.”

The bishop added that based on the essay in Tran’s seminary application, it was evident he had a “strong friendship with Jesus Christ, a great devotion to the Blessed Sacrament and love for our Blessed Mother.”

“He was a prayerful and faithful man, so even through this challenging time, I know he would encourage prayer,” the bishop said.

Within the diocese, Tran served in summer assignments at parishes in South Plainfield, Jamesburg, Bridgewater and New Brunswick. Prior to beginning seminary studies, he lived at the St. John Vianney House of Discernment in Highland Park, New Jersey, a place where men who are working or attending college can live as they discern a vocational calling and the possibility of priesthood.

Tran was born and raised in the An Giang province in southern Vietnam. He is the son of Khai Quang Tran and Bich Thi Ngoc and was one of six siblings.

He graduated with a bachelor’s degree in English literature from the University of An Giang in 2016. He arrived in the United States in 2017 after working as an English teacher. He also taught English, mathematics, Scripture and Catholic studies for students in need.

In his application essay to become a seminarian of the Metuchen Diocese, Tran wrote that it had always been a dream of his, and what he felt was his vocational calling, to become a shepherd after the heart of Jesus Christ, the Good Shepherd.

“I believe that Jesus Christ has given me his cross because he is the only way to eternal life,” Tran wrote. “He challenges me and is always beside me to support me and to listen to my prayers. Thanks to the mercy and grace of the Lord, I am called to proclaim his death and confess his resurrection.”

“From every interaction with Peter, even from his application to become a seminarian for our diocese, it was evident that he had a strong friendship with Jesus Christ, a great devotion to the Blessed Sacrament, and a love for our Blessed Mother,” said Bishop Checchio.

“Through our sorrows and pain,” he added, “our Blessed Mother is with us and is undoubtedly accompanying Peter to the merciful embrace of her son, Jesus.”

NEXT: Franciscan leaders urge ‘boldness’ by U.S. to end violence in Holy Land