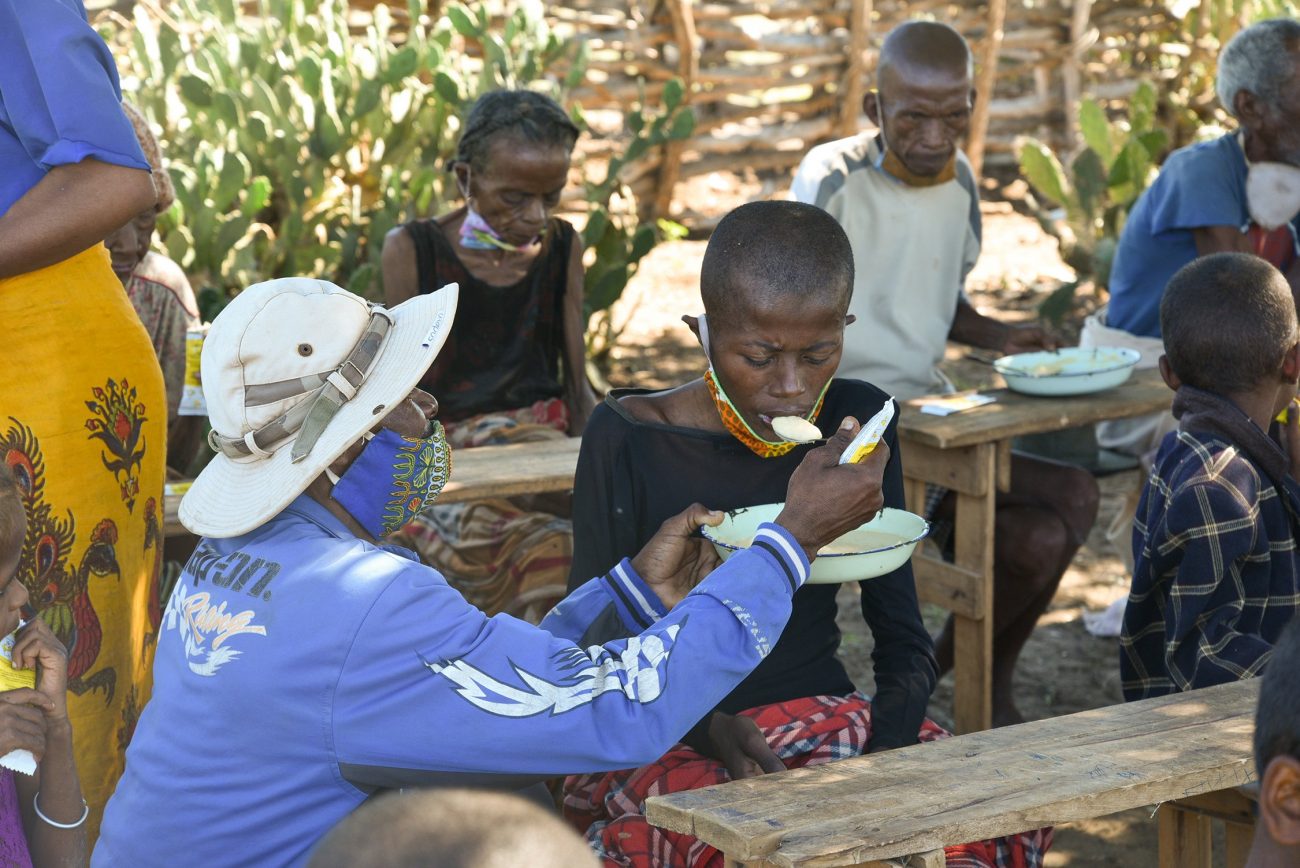 A woman is fed rations of food in Sihanamaro, Madagascar, during an emergency distribution of hot meals to the elderly and malnourished children in the drought-affected regions of southern Madagascar April 29, 2021. (CNS photo/Krystyna Kovalenko, courtesy World Food Program)

The utter silence of a room filled with young children “overwhelmed me,” said Arduino Mangoni, deputy country director of the U.N.’s World Food Program. He visited a center where severely malnourished people were being treated in the city of Ambovombe in January.

The situation has worsened and “I’ve never seen kids in the state they are in now” in parts of the island nation, 250 miles off the coast of mainland Africa, Mangoni told Catholic News Service May 21.

About 1.14 million people in the south of Madagascar face high levels of acute food insecurity, the World Food Program said in a statement. Of these, 14,000 are in the catastrophe category, and this number is expected to double over the next lean season, which begins in October.

People are eating cactus leaves and clay they mix with juice from whatever fruit they can find, Mangoni said.

Tanja Englberger of Catholic Relief Services told CNS that finding food and water “are the things people talk about” in southern Madagascar.

Englberger said a woman in a small village “asked if she could show me her gums, which were raw” from eating the bitter fruit she had found on a little tree.

“It’s an extremely hard life,” she said, noting that in parts of the south, one-third of residents have no clean water. 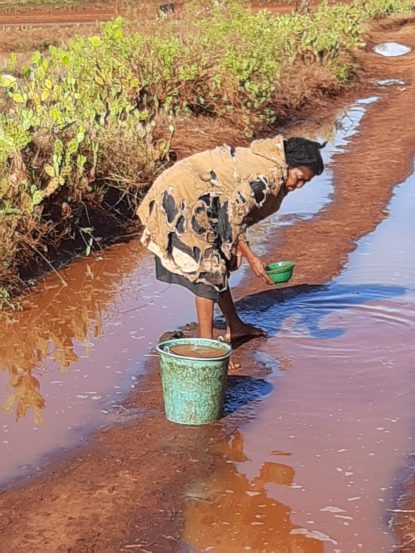 “They drink water from puddles when there’s been rain,” she said.

But there was no rain in the last rainy season, and sandstorms “very unusual in their frequency and intensity” have transformed the landscape, with hundreds of square miles of arable land now covered in sand, she said.

“In addition to what we’re seeing with our own eyes,” regular household surveys done by Catholic Relief Services show the “dire situation,” Englberger said.

“The price of one cup of corn rose from 14 cents to 91 cents from March 2020 to March 2021,” and the number of people who have sold a valuable asset, such as a cooking pot, is five times last year’s figure, she said.

Many people walk about 15 miles to get water, Englberger said. While international organizations and the government have erected water points, “the water table is low and the terrain rocky, so this is complicated,” she said.

On a two-week trip across southern Madagascar in early 2021, she met many people walking long distances to find cactus fruit; then they walked on to towns where they hoped to be able to sell it. They would try to sell four pieces of fruit for the equivalent of 3 cents.

Vilisoa, a woman in her mid-30s with 14 children, was one of the people Englberger met. Her “very sad-looking 15-year-old daughter was extremely thin and had bilharzia,” she said. Bilharzia is a chronic, tropical disease characterized by disorders of certain vital organs. The family group, which included many older people, had walked 75 miles in a week to get to the town of Ampanihy.

“They had nothing. They were looking for water to sell to try to make ends meet,” she said.

The predictability of the weather seems to have ended, Englberger said, noting that the lean season starts earlier and lasts longer. Along with locusts, new pests such as “an armyworm first seen three years ago” ravage corn when it does grow, she said.

The crop failures have driven thousands of people to leave their homes and walk to towns in the hope of eking out a living, she said.

Mangoni said that with COVID-19 keeping tourists away, even the few jobs that could be found in southern Madagascar’s coastal towns have disappeared. With no other guests, the hotel he and colleagues stay in on their regular visits to the south opens for them, then shuts again when they leave.

Some of the staff “cried as they spoke of their desperation” on his latest visit in late April, he said.

“Drought, sandstorms, plant and animal pests and diseases, and the impact of COVID-19 have caused up to three-quarters of the population in the worst-affected Amboasary-Atsimo district to face dire consequences,” the World Food Program said in a statement. Global acute malnutrition rates “have crossed an alarming 27%, causing irreversible damage to children,” it said.

While pandemic restrictions have halted all flights into the country, relief organizations and others are “trying to open a humanitarian corridor” to get food to people, Mangoni said.

“We need to secure resources now” to be able to get food, seeds and other necessities there before the next lean season starts, he said, noting the island’s poor infrastructure and weak road networks.

PREVIOUS: Pope asks all Catholics to commit to saving creation