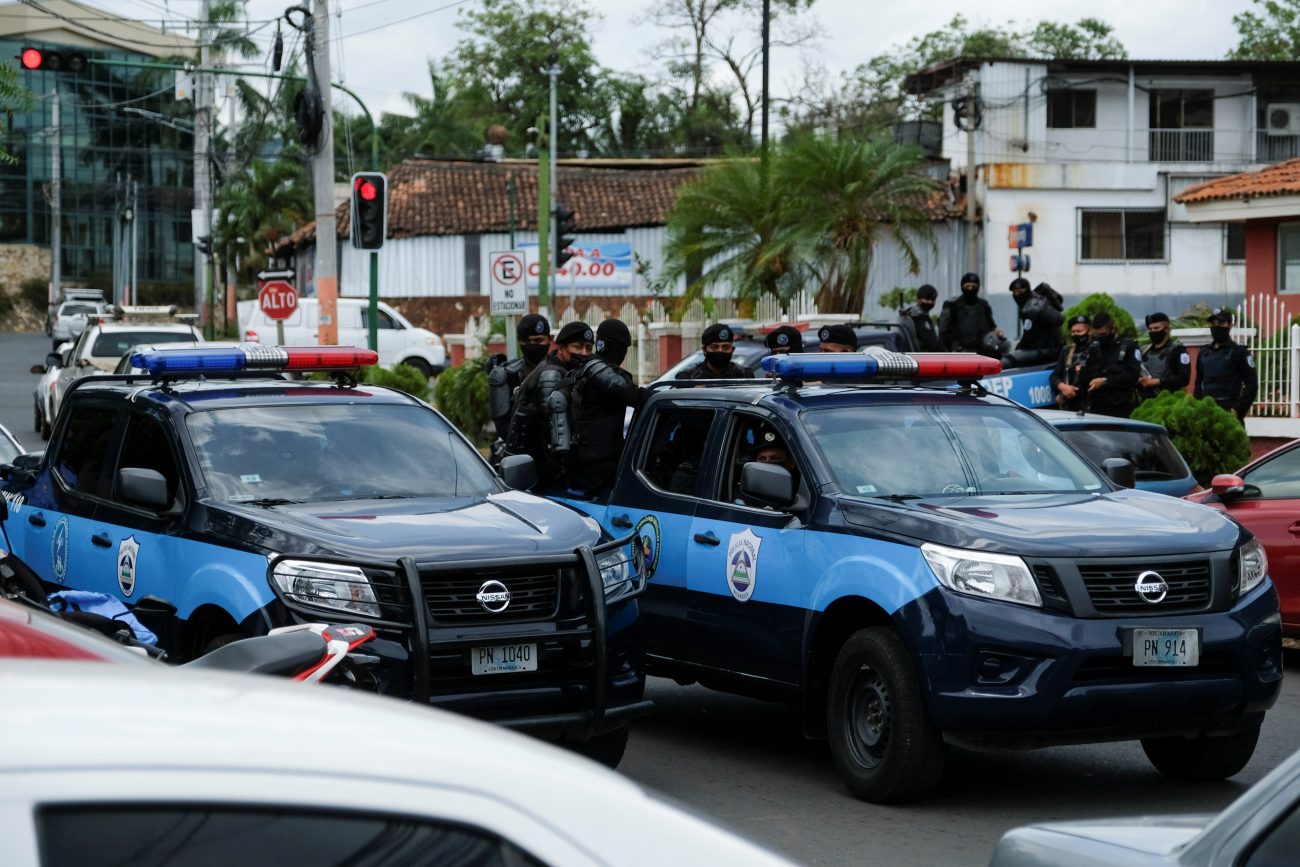 Officers of the Nicaraguan National Police keep watch outside the attorney general's office in Managua May 21, 2021, as presidential hopeful Cristiana Chamorro meets with government officials after they announced a money laundering investigation against her. Chamorro seeks to challenge longtime Nicaraguan President Daniel Ortega in the national elections in November. (CNS photo/Carlos Herrera, Reuters)

MEXICO CITY (CNS) — Nicaraguan Catholic leaders have decried a series of repressive acts that targeted parties and individuals linked with the opposition ahead of November elections.

The churchmen also called for unity as the opposition to the increasingly tyrannical President Daniel Ortega remains fractured.

“We cannot continue living as if we were at war with each other and against everything,” Bishop Rolando Álvarez of Matagalpa said in his Pentecost homily May 23. “Let’s think of the country that we yearn for. Putting this off would be mortgaging the future of the country.”

Bishop Álvarez, president of the Nicaraguan bishops’ conference, concluded his homily by saying, “In this historical context, a transparent, fair and free electoral process becomes urgent and necessary … a process that can generate dialogue between sectors to have a minimum social consensus without exclusion.”

The Ortega government has quashed dissent since protests erupted in 2018 and demonstrators demanded his ouster. Police, prosecutors and institutions packed with Ortega cronies have more recently attempted to intimidate or disqualify potential opponents from the fall election.

On May 18, Nicaraguan officials annulled the legal status of the Democratic Restoration Party, which observers say could have potentially pulled together the opposition into a coalition.

“The government is mocking the election. Of course they don’t want the popular will to be expressed because they would lose,” said Msgr. Carlos Áviles, spokesman for the Archdiocese of Managua.

“They’re discouraging people so they don’t vote, shutting down a party, canceling a candidate, so that people say, ‘I’m no longer going to vote.’ This makes it easier for them to commit fraud or arrive at the elections with a divided vote.”

On May 20, police raided the offices of the nongovernmental group Violeta Barrios de Chamorro Foundation for Reconciliation and Democracy and said it was investigating its former director, Cristiana Chamorro, for supposed money laundering. Chamorro, daughter of former President Violeta Chamorro, has not discarded the possibility of running for president against Ortega. She denied any irregularities in the foundation’s finances.

Police also raided the offices of the newspaper Confidencial the same day. The newspaper is run by Carlos Chamorro, Christiana Chamorro’s brother.

Ortega has accused the newspaper and foundation of plotting a coup against him, prompting Carlos Chamorro to spend a year in exile in Costa Rica before returning to Nicaragua. The foundation was closed earlier in 2021 after the Nicaraguan government passed a foreign agents’ law, which forbids nongovernmental groups from accepting foreign funding.

Managua Auxiliary Bishop Silvio José Báez tweeted his dismay with the raid on Confidencial, calling it “(a) new abuse by the dictatorship against this media outlet. The truth engenders freedom, which is why they’re so afraid of it. Nicaragua cannot continue being kidnapped!”

NEXT: Synod process must begin ‘from bottom up,’ pope tells bishops