Synod process must begin ‘from bottom up,’ pope tells bishops 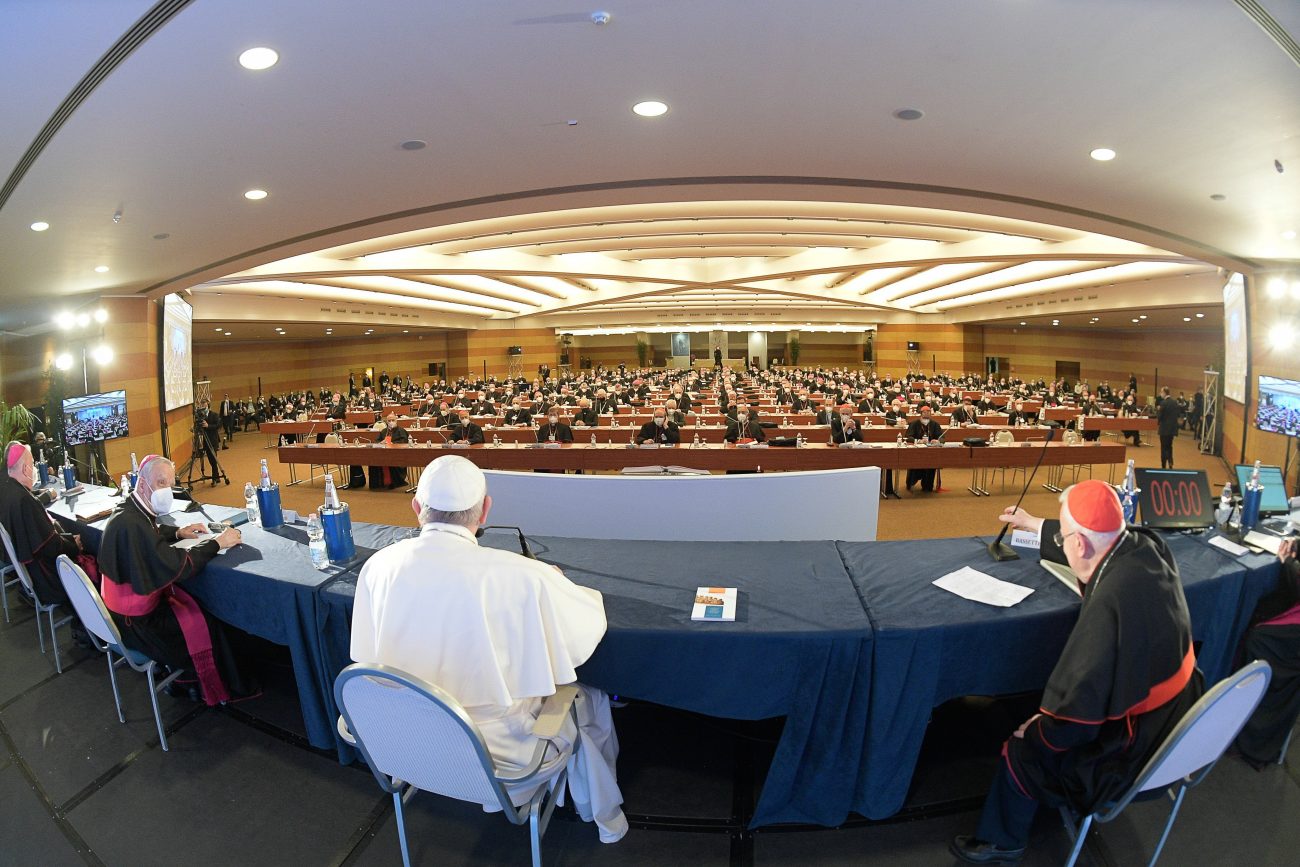 Pope Francis attends the assembly of the Italian bishops' conference in Rome May 24, 2021. (CNS photo/Vatican Media)

ROME (CNS) — Welcoming the Italian bishops’ decision to begin planning a national synod, Pope Francis told them that it must begin at the grassroots with “the smallest parish, the smallest diocesan institution.”

“The synod must begin from the bottom up,” he told the bishops May 24 at the spring assembly of their conference.

“This will require patience, work, allowing people to talk so that the wisdom of the people of God will come forth because a synod is nothing other than making explicit what ‘Lumen Gentium’ said: The whole people of God — all of them, from the bishop on down — is infallible in belief,” the pope said. “They cannot err when there is harmony among all.”

“Lumen Gentium,” the Second Vatican Council’s Dogmatic Constitution on the Church, said: “The entire body of the faithful, anointed as they are by the Holy One, cannot err in matters of belief. They manifest this special property by means of the whole peoples’ supernatural discernment in matters of faith when ‘from the bishops down to the last of the lay faithful’ they show universal agreement in matters of faith and morals.”

Pope Francis did not realize his introductory words were being broadcast. He had asked Cardinal Gualtiero Bassetti of Perugia-Città della Pieve, president of the conference, if journalists were present. When the cardinal said no, the pope said, “I can speak freely now,” but the live feed continued for a few minutes.

The pope told the bishops he was pleased with the work they had done in reorganizing the diocesan and regional tribunals, apparently in reference to his earlier request that they be reorganized particularly to handle marriage cases more quickly and pastorally.

He also told them he was worried about the criteria used to admit men to diocesan seminaries, especially without checking whether they had been asked to leave other seminaries or religious orders. “We frequently have seen seminarians who seem good, but rigid. And rigidity is not auspicious. And then we discover that behind that rigidity there are big problems.”

After the brief introductory remarks, he said the rest of their time together would be question and answer, because “it’s better that way. You can talk about the things that interest you.”

Cardinal Bassetti told the pope that setting out to plan a national synod, the bishops disagreed with the line from the famous Italian novel “The Betrothed,” which said, “Courage is not something you can give yourself.”

“We are convinced that if one does not have courage, perhaps it will come if one is moved by a desire and a dream that are greater than one’s fears,” the cardinal said. “And maybe you will give us a push, a bit of courage,” he told the pope.

The meeting was held in a hotel conference room in Rome; usually the Italian bishops meet in the Vatican synod hall, but there was not enough room to ensure social distancing. According to the bishops’ conference website, the country has 226 dioceses and 401 bishops, including retired members, who can participate in the assembly gatherings.

The bishops, religious and laypeople who gathered in Florence in 2015 for the Italian church’s national convention, held every 10 years, spoke about the idea of having a synod, but no formal steps were taken to organize it. “Now, take it up again. It’s time,” the pope told the catechetical office.

At their 2019 spring assembly, the Italian bishops held discussions of what Pope Francis means by “synodality.”

Opening that meeting, Pope Francis had told them that the amount of time the bishops spend listening to their faithful and the strength of a sense that all Italian Catholics have of “walking together” — the meaning of the term synodal — is a measurement of “the state of health of the Italian church and of your pastoral and ecclesiastical work.”

For example, he said, one area where there is “a possible lack of collegiality and participation in the conduct” of the bishops’ conference is “in the determination of pastoral plans and in programmatic economic and financial commitments.”

Bishop Stefano Russo, general secretary of the Italian bishops’ conference, told Italian Catholic media May 23 that in encouraging the bishops to launch a synodal process, the pope is urging them to return to the experience of the early Christian community which understood “the church” as the people of God.

Pope Francis’ call to begin the preparations starting from the grassroots will allow “the true nature of the Christian community to emerge,” he said. “It is necessary to begin by listening to the community and all its components. This dynamic will allow us to recover the true meaning of the church as a great family.”

Since the Second Vatican Council, the Italian Catholic Church has held a national convention every 10 years to set priorities for a pastoral plan. It was at the last convention, in 2015, that Pope Francis first broached the idea of a national synod.

Bishop Russo said a synod would go deeper and broader than the conventions by ensuring there is a serious process of listening at the local level before drawing up any plans. “There is no rush to draft a common document; we will give the right amount of time for listening, seeing and understanding before we develop a synthesis of the journey we’ve shared.”