WARSAW, Poland (CNS) — Pope Francis has accepted the resignation of Bishop Jan Tyrawa of Bydgoszcz, the latest bishop accused of covering up sexual abuse by clergy.

The bishops’ conference said the Vatican had “conducted proceedings on reported negligence” in line with the pontiff’s May 2019 motu proprio, “Vos estis lux mundi,” and had also taken account of “other difficulties” facing Bishop Tyrawa.

Poland’s Catholic Wiez bimonthly said May 12 Bishop Tyrawa had reappointed Father Pawel Kania to Bydgoszcz’s Divine Providence Parish after the priest had been detained by police and suspended from another diocese for propositioning boys and storing child pornography on his computer.

It added that Father Kania had cared for altar boys and taught religious classes to children at his new parish in from 2006 to 2009, before being jailed in 2015 for seven years.

In February 2020, a court ordered the Bydgoszcz Diocese to pay $40,000 in damages to one of Father Kania’s victims, an order upheld on appeal in December.

Bishop Tyrawa’s lawyer, Edmund Dobecki, told Poland’s Gazeta Wyborcza daily May 12 the bishop had “intended to resign for some time,” after facing dismissal calls from Polish legislators following a court cross-examination in October 2019.

Protesters have staged several demonstrations outside the bishop’s residence, most recently April 8, when the building was daubed with anti-clerical placards.

The departure of the 72-year-old is the latest among Poland’s bishops, several of whom were accused in 2019 and 2020 TV documentaries of violating Polish law and Vatican guidelines by brushing aside abuse complaints.

On March 29, the Vatican forbade Archbishop Slawoj Glodz of Gdansk and Bishop Edward Janiak of Kalisz, both of whom resigned in 2020, from participating in “public religious celebrations or lay meetings.” They were told to pay an “appropriate amount” to the Polish church’s St. Joseph Foundation, set up in 2019 to fund preventive activities and assistance to abuse victims.

Auxiliary Bishop Jan Szkodon of Krakow, who was suspended in February 2020 following media accusations he abused an underage girl.

In November, days before he died, Cardinal Henryk Gulbinowicz was barred from using episcopal insignia and denied the right to a cathedral funeral after being similarly implicated in sexual abuse.

In mid-March, Poland’s TVN-24 channel said Cardinal Stanislaw Dziwisz, the retired archbishop of Krakow who served for 39 years as secretary to St. John Paul II, and three bishops from the nearby Bielsko-Zywiec Diocese could face jail sentences after a Polish state commission on pedophilia accused them of ignoring clerical abuse. 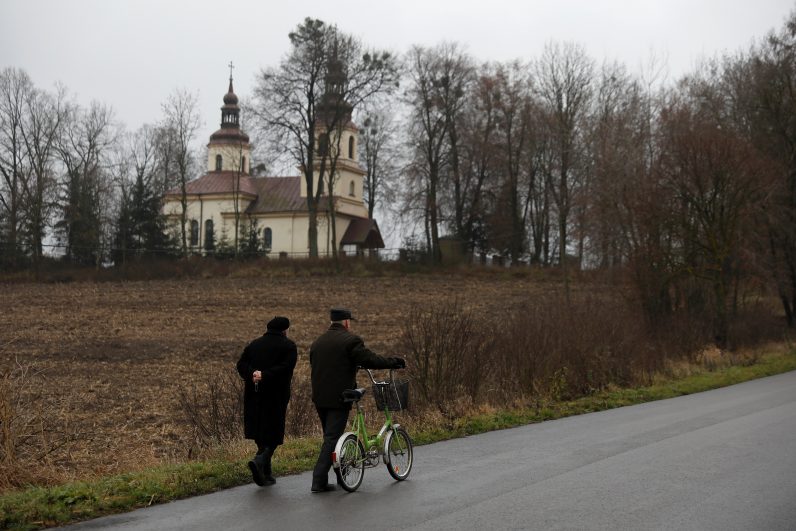 NEXT: In Gaza, tiny Catholic community tries to stay in touch during airstrikes