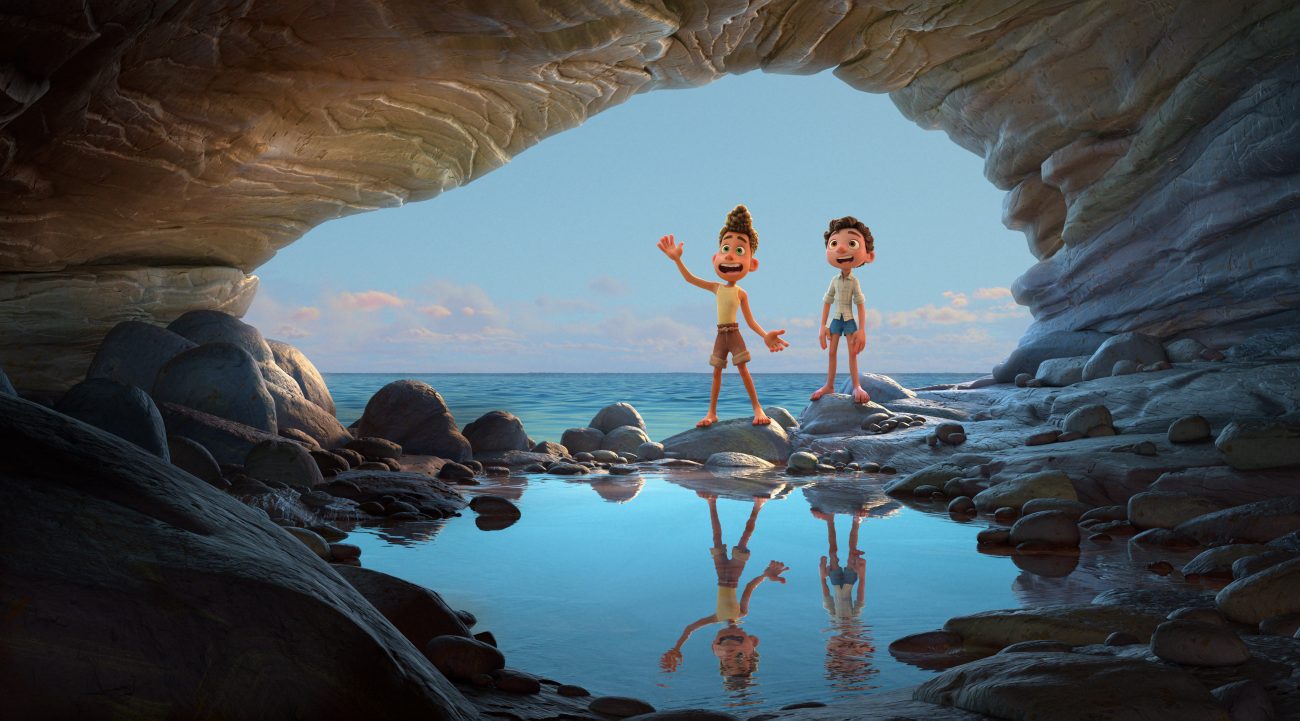 This is a scene from the animated movie "Luca." The Catholic News Service classification is A-I -- general patronage. The Motion Picture Association rating is PG -- parental guidance suggested. Some material may not be suitable for children. (CNS photo/Disney and Pixar)

NEW YORK (CNS) — While it does nothing to solve the perennial problem for real-life parents that obedient children rarely have adventures, director Enrico Casarosa’s animated fantasy “Luca” (Disney+) is otherwise a winsome tale full of charm and Italian flair.

Too complicated for tots, who also might be frightened, it’s thoroughly enjoyable fare for all others.

The film’s premise is indeed fantastical since the titular protagonist is a young sea monster (voice of Jacob Tremblay) living in the waters off the coast of Liguria. A gentle shepherd of fish, Luca’s benign nature, like that of all those by whom he’s surrounded, completely belies the threatening moniker humans have given them.

Though timid, Luca is also curious and, with the encouragement of Alberto (voice of Jack Dylan Grazer), a more daring and experienced peer he accidentally meets, he makes the starling discovery that he and his new pal are both transformed into preteen boys when on dry land (something of which Alberto is already aware). Luca is understandably anxious to explore the unknown world thus laid open to him.

After his overprotective mom, Daniela (voice of Maya Rudolph), and well-meaning but distracted dad, Lorenzo (voice of Jim Gaffigan), learn of Luca’s secret activities, they threaten to send him to live with his deep sea-dwelling Uncle Ugo (voice of Sacha Baron Cohen). So Luca and Alberto make a break for it and set off for the nearby town of Portorosso.

There, they befriend Giulia (voice of Emma Berman), a strictly human local girl, and enjoy the hospitality of her fisherman father, Massimo (voice of Marco Barricelli). Plucky Giulia has a long-standing rivalry with arrogant Ercole (voice of Saverio Raimondo), the town bully, who has repeatedly defeated her in Portorosso’s annual triathlon.

Partly for Giulia’s satisfaction and partly to win enough prize money to buy the Vespa they both long to own, Luca and Alberto agree to enter the event as her teammates. But their plan may be thwarted since Daniela and Lorenzo, having taken on human form, are in hot pursuit of their son.

Touches of humor — the triathlon consists of biking, swimming and pasta-eating — consistently appealing characters and picturesque visuals combine to make this Pixar production top-flight. Such themes as the tensions that develop among the central trio, with Alberto offering Luca the prospect of a carefree, Tom Sawyer-Huck Finn lifestyle while studious Giulia has him yearning to go to school, are well-handled.

The closest thing to the kind of scatological material that so often crops up in movies for youngsters is a fleeting scene in which Alberto picks his nose. The Italian fondness for conveying ideas physically is depicted by a few nonverbal expressions of disdain. But these are more boisterous than harsh.

In the midst of a comic situation, a momentarily endangered child makes the sign of the cross in what those on the lookout for objectionable elements might consider a frivolous way. As for Portorosso’s priest (voice of Jonathan Nichols), he is portrayed as a community fixture — a pleasant, though bland, presence among his parishioners.

Colorful and touching, “Luca” is a quality offering fit for almost all ages.

The film contains characters in peril and a couple of rude gestures. The Catholic News Service classification is A-I — general patronage. The Motion Picture Association rating is PG — parental guidance suggested. Some material may not be suitable for children.

PREVIOUS: Sweeping, upbeat ‘In the Heights’ keeps a dream alive