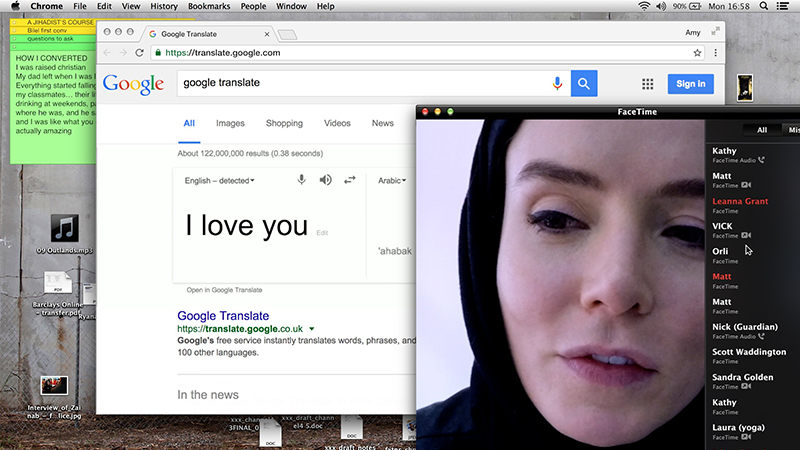 NEW YORK (CNS) — In 2015, a French journalist who now calls herself Anna Erelle published the memoir “In the Skin of a Jihadist.”

It recounted her effort to infiltrate the online recruitment process by which ISIS drew Europeans to join their campaign of terror in the Middle East. The project eventually proved so perilous that Erelle not only had to change her name but still lives under 24-hour police protection.

In co-writing the script for his screen version of Erelle’s book, penned in collaboration with Britt Poulton and Olga Kharina, director Timur Bekmambetov shifted the action to Britain but left much else intact. The result is an intelligent, if flawed, thriller suitable for a broad audience of grown-ups.

Erelle’s stand-in is investigative journalist Amy Whittaker (Valene Kane). Strapped for cash and anxious to make a professional splash, Amy has come up with the idea of using a fake online identity to pose as “Melody,” a recent — and vulnerable — Muslim convert open to radicalization.

In short order, Melody is contacted by London-bred but now Syria-based militant Bilel (Shazad Latif) and her alter ego sets to work to study his modus operandi. Even as Bilel uses standard psychological techniques to lure her into joining the far-off fight, however, Amy discovers that he is surprisingly personable.

He’s a cat fancier who likes to play soccer with his comrades. He also has a compelling story about the widespread prejudice that soured him on life in the U.K. And then there’s the fact that he’s handsome and a hunk. Gradually, Amy’s feelings about Bilel begin to become conflicted.

Bekmambetov tells Amy’s story entirely through the activity on her computer, an approach — or gimmick — known as Screenlife. In this case, doing so helps to build suspense as Amy struggles to conceal her real-life relationships with her soon-to-be live-in boyfriend, Matthew (Morgan Watkins), and her hard-edged editor, Vick (Christine Adams), from the dangerous killer she’s trying to dupe.

Yet the degree to which Amy falls under her adversary’s sway ultimately seems far-fetched. A secular Westerner, she is presumably opposed to everything Bilel holds dear — his ends as well as his means. And is it really that easy to forget that, after the beautiful game, his second-favorite pastime is probably beheading infidels?

If not always believable, however, “Profile” is at least never boring.

Bekmambetov depicts the acts of barbarous cruelty that were ISIS’ trademark with restraint, though he teases viewers by showing the preliminaries of such behavior without following through on them. The audience is thus, for better or worse, chilled without being revolted.

By avoiding anything more graphic, Bekmambetov may be shying away from reality — perhaps in order to make Amy’s ambivalence toward Bilel more credible. But he also keeps the proceedings acceptable for those in search of thoughtful, but not harrowing, drama.

The film contains discreetly portrayed but potentially disturbing violence, a cohabitation theme, at least one use of profanity and a milder oath, considerable rough language and a handful of crude terms. The Catholic News Service classification is A-III — adults. The Motion Picture Association rating is R — restricted. Under 17 requires accompanying parent or adult guardian.

PREVIOUS: Catholic travel guide is a keeper, whether you’re hitting the road or not

NEXT: ‘A Quiet Place Part II’: Not as silent, more predictable than predecessor