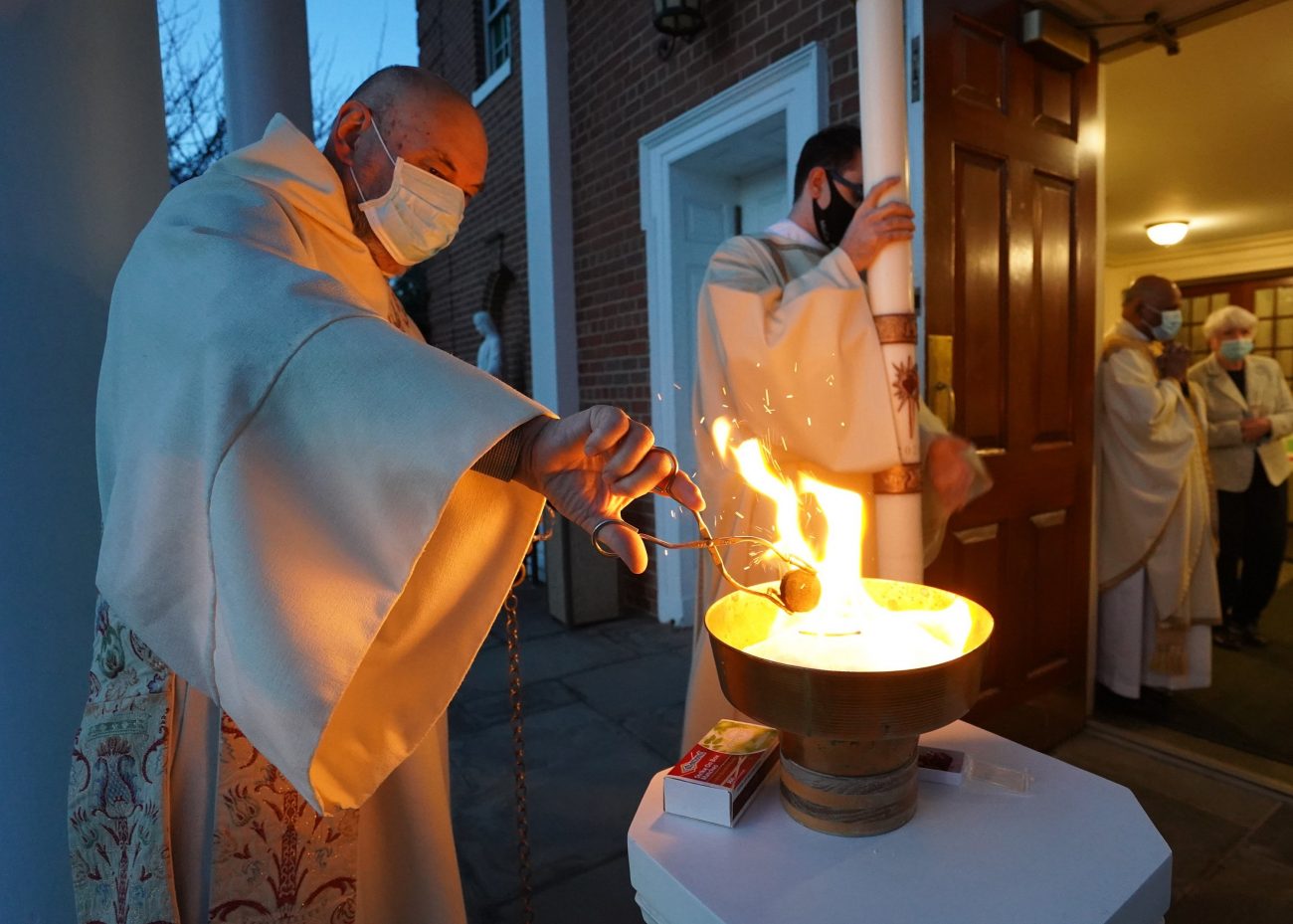 Deacon Robert Braun lights a charcoal briquette used for the burning of incense prior to the beginning of the Easter Vigil April 3, 2021, at St. Anthony of Padua Church in East Northport, N.Y., amid the coronavirus pandemic. (CNS photo/Gregory A. Shemitz)

WASHINGTON (CNS) — Based on responses to a questionnaire sent to all U.S. dioceses, the Center for Applied Research in the Apostolate estimates there are about 19,000 deacons in the United States today.

The number, though, is dropping, mirroring trends seen in religious life and the priesthood for the past half-century.

“Responding offices reported that 410 deacons retired from active ministry and 378 died. Another 587 were ordained to the permanent diaconate during 2020,” said the report, “A Portrait of the Permanent Diaconate: A Study for the U.S. Conference of Catholic Bishops,” issued June 1. The trend goes back to at least 2014.

CARA also figures that, if 78% of deacons are in active ministry, then 17% are retired, 2% are on a leave of absence, 2% have been suspended from active ministry, and 2% inactive for other reasons.

(Meet the nine men to be ordained permanent deacons this June in the Philadelphia Archdiocese, here.)

But other dioceses have a much smaller ratio of Catholics to deacons. The Diocese of Lexington, Kentucky leads the way with a ratio of 508 Catholics per deacon.

According to CARA, 93% of deacons are married, 4% are widowed, 2% have never married, 1% are divorced and have not remarried, and fewer than 1% remarried subsequent to diaconal ordination.

CARA said the racial and ethnic makeup of U.S. deacons is 72% white, 21% Hispanic, 4% Asian/Pacific Islander, 3% Black, and fewer than 1% Native American or other.

How dioceses deal with diaconal ministry also were questionnaire topics.

Eighty percent of responding dioceses say they have a plan for placement and ministry of deacons, and 93% have an active formation program for the diaconate. Of those that don’t, 78% said they were planning to establish one within the next two years.

Close to two-thirds of dioceses have an active deacon council or deacon assembly, and responding dioceses were about evenly split as to whether they had a formal policy for deacons who got divorced or separated after their ordination.

“As our world continues to grapple with the effects of the COVID-19 pandemic, permanent deacons provide an encouraging witness to the love and mercy of Christ,” said Bishop James F. Checchio of Metuchen, New Jersey, chairman of the U.S. bishops’ Committee on Clergy, Consecrated Life and Vocations.

In a statement accompanying the release of the CARA report, he emphasized the importance of permanent deacons to the church, saying: “They bring the light and presence of Jesus into many different areas of society — preaching the Gospel in their jobs, within their families, to the poor and among their broader communities.”

PREVIOUS: Migration summit aims to work toward ‘church without borders’

NEXT: Cardinal Rigali recalls memorable moments in 60 years of priesthood