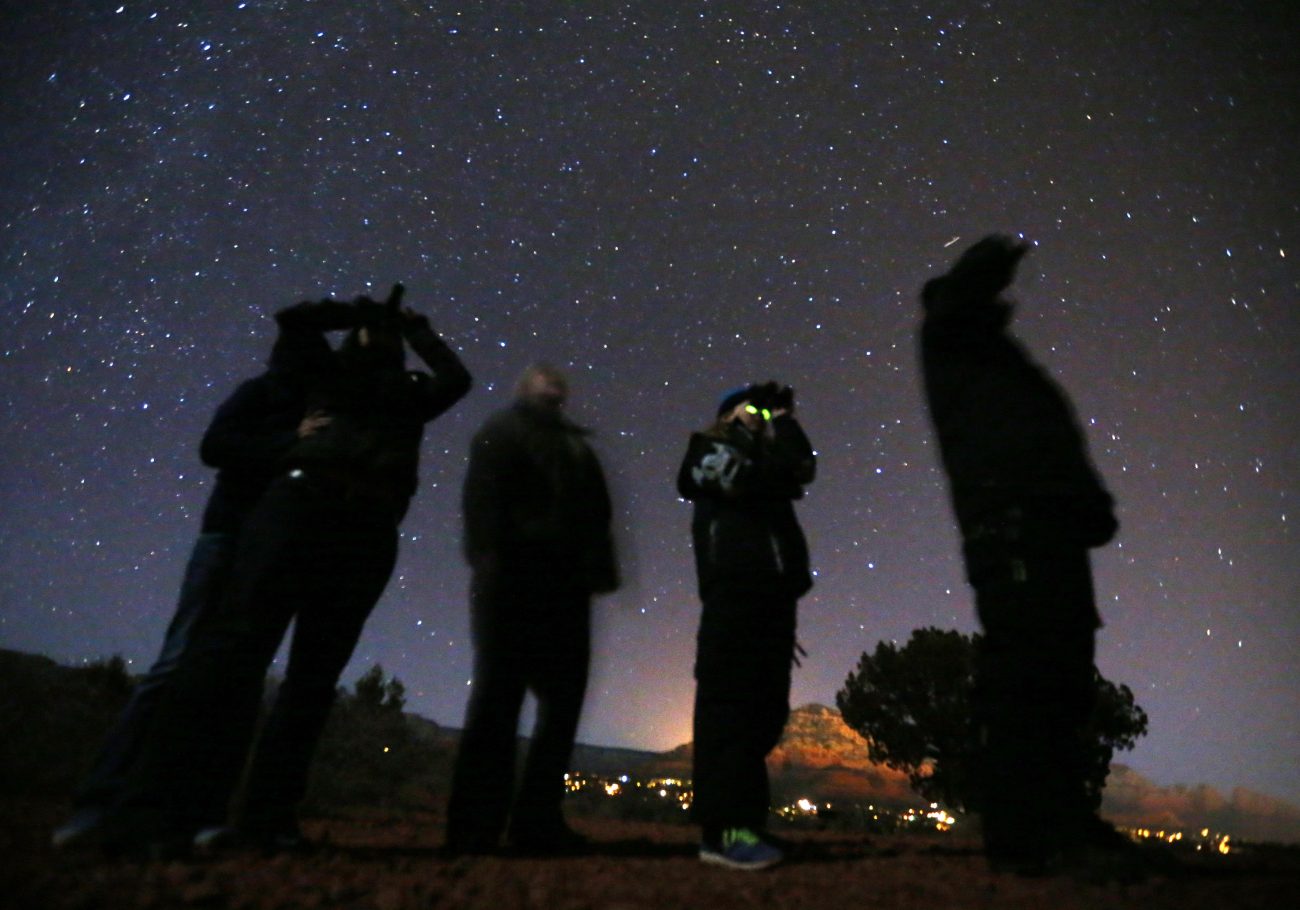 People use night vision goggles to look at the night sky during an Unidentified Flying Object (UFO) tour in the desert outside Sedona, Arizona, in this Feb. 14, 2013, file photo. With the expected release this month of the U.S. Department of Defense's report on unidentified aerial phenomenon, Catholic News Service spoke to three experts on the potential discovery of extraterrestrial life and its theological implications. (CNS photo/Mike Blake, Reuters)

VATICAN CITY (CNS) — With the expected release this month of the U.S. Department of Defense’s report on unidentified aerial phenomenon, or UAPs, the question of intelligent life beyond Earth’s solar system is back in the limelight.

The long-sought answer to “Are we alone in the universe?” has been contemplated by many, especially those who are curious about its scientific and theological implications.

In an interview in 2015, several months after the discovery of Kepler-452b — a so-called “super-Earth” located approximately 1,400 light years away in the habitable zone of its star — Pope Francis was asked for his thoughts on the possibility of intelligent life existing on other planets.

“Honestly, I wouldn’t know how to answer. Until America was discovered, we thought it didn’t exist, and instead it existed,” the pope told the French news magazine, Paris Match. “But in every case I think that we should stick to what the scientists tell us, still aware that the Creator is infinitely greater than our knowledge.”

While science and religion are often pitted against each other as separate and irreconcilable camps, St. John Paul II saw the benefit of a synergistic relationship that could lead humanity toward a greater understanding of the unknown.

“Science can purify religion from error and superstition; religion can purify science from idolatry and false absolutes. Each can draw the other into a wider world, a world in which both can flourish,” he wrote in a 1988 letter to the late Jesuit Father George V. Coyne, former director of the Vatican Observatory.

Which is why it should come as no surprise to find Catholic scientists who are active in the study of the possibility of intelligent extraterrestrial life. 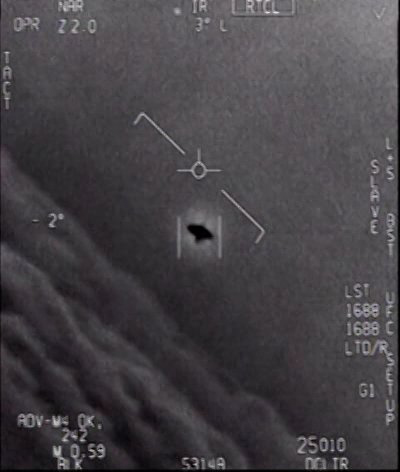 An unexplained aerial phenomenon is seen in this still image from the so-called “Gimbal” video captured by a U.S. Navy fighter pilot off the East Coast of the United States between 2014 and 2015. With the expected release this month of the U.S. Department of Defense’s report on unidentified aerial phenomenon, Catholic News Service spoke to three experts on the potential discovery of extraterrestrial life and its theological implications. (CNS photo/U.S. Navy via Reuters)

Among them is Jesuit Father José Gabriel Funes, an astronomer and former director of the Vatican Observatory, who leads Project OTHER, a Spanish acronym that stands for “Otros mundos, Tierra, Humanidad y Espacio Remoto (Other worlds, Earth, Humanity and Remote Space).

Speaking with Catholic News Service June 10 by Zoom from Cordoba, Argentina, Father Funes warned that while the subject of intelligent extraterrestrial life can spur interesting and exciting conversations, it also could veer into the realm of conspiracy theories that depart from true science.

“We need to address the topic in a professional way. And by professional, I mean in an academic way,” Father Funes said.

Project OTHER, he explained, brings together astronomers, biologists, philosophers and theologians at the Catholic University of Cordoba to not only study the possible existence of intelligent extraterrestrial life, but also the impact its potential discovery could have on the scientific, philosophical and religious comprehension of humanity.

Their possible existence raises religious questions, including questions involving the mystery of the Incarnation, in which the Word assumed human nature and thus, as described by the Catechism of the Catholic Church, Jesus is both “true God and true man.”

Whether the Incarnation is exclusive to Earth or repeated in other planets with intelligent life, Father Funes noted, has been pondered for decades by theologians, including famed Jesuit theologian Karl Rahner, who died in 1984.

Nevertheless, Father Funes said, the incarnation of Christ was and remains a “unique” event.

“I’m not a theologian, but my conclusion is that one Incarnation is more than enough,” he told CNS. “We don’t need to complicate things more than they are. It’s already difficult to understand one Incarnation, but this is my way of thinking.”

Dominican Father Thomas F. O’Meara, a retired theology professor at the University of Notre Dame and author of “Vast Universe: Extraterrestrials and Christian Revelation,” echoed Father Funes’ sentiment on the Incarnation, arguing that “the Incarnation doesn’t require that Jesus also be incarnate on other planets.”

Regarding the existence of extraterrestrial life, Father O’Meara told CNS June 14 that the fact that there are billions of planets increases the likelihood of planets with both life and intelligent life.

That belief, he added, would probably be supported by one of the church’s greatest scholars: St. Thomas Aquinas.

“Thomas Aquinas’ view of the world is that God has made a world that is quite vast and quite diverse,” Father O’Meara explained.

“Now, of course, he had no idea how vast and diverse it was, but that’s what he sees just from plants and flowers and fish and stars and things like that. And he thinks that because the point of the universe is to show the richness and diversity of God,” he said.

The belief in the likelihood of extraterrestrial life is also shared by nonbelievers as well, including Anders Sandberg, senior research fellow at the Future of Humanity Institute at the University of Oxford.

Speaking to CNS June 9, Sandberg said it is easy to believe that the existence of life on Earth “is just a one-time miracle.” However, much like Father O’Meara, the Swedish researcher believes that the probability that earthlings are alone in the cosmos is very low.

“We’re probably not alone because the universe looks like it’s actually infinite,” he said. “We haven’t found any evidence that there is any kind of edge on it or that it’s curving together.”

However, with many seeing the upcoming Pentagon report as proof of alien life, Sandberg told CNS that to immediately base a conclusion on inconclusive evidence, such as blurry images, “is a mistake,” and that the constant flood of information regarding unexplained phenomenon should be taken “with a bit of caution.”

“The world is large, so one-in-a-trillion chances happen monthly and are reported globally,” he said.

Instead of assuming that “a weird blob” in the sky is evidence of alien life, Sandberg suggested people instead “maybe say, ‘There are more weird things in the world than I expected.'”

“Intellectual humility is a very useful thing,” he said.

NEXT: Faith leaders to meet at Vatican in October to discuss climate change