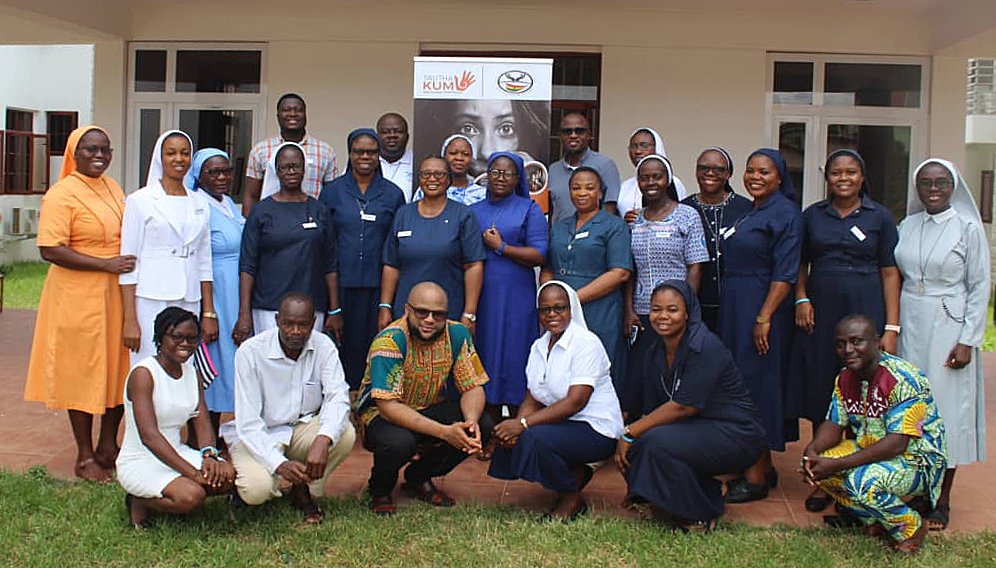 Men and women religious from Ghana, Nigeria and Burkina Faso who participated in the June 1-5, 2021, Talitha Kum workshop on collaboration and networking to combat human trafficking are seen at the School Sisters of Notre Dame Provincial House in Accra, Ghana. (CNS photo/Damian Avevor)

Conference participants from Ghana, Nigeria and Burkina Faso, who are members of Talitha Kum, an international network of women and men religious fighting trafficking, said the work was crucial because people are being trafficking into dehumanizing conditions.

In a seven-point “Action Plan,” the group resolved during the June 1-5 gathering to improve communications and expressed a desire to connect with conferences of major superiors in their respective countries. They also planned to regularly convene online to pray to end trafficking.

“The COVID-19 pandemic has magnified the scourge of human trafficking. Traffickers prey upon the most vulnerable and look for opportunities to exploit them,” participant Sister Monica Onwunali, a member of the Missionary Sisters of Our Lady of Apostles in Nigeria, told Catholic News Service.

“As the whole world stood still, traffickers did not shut down. They continued to harm people, finding ways to innovate and even capitalize on the chaos,” Sister Monica said.

Seeking to escape dire poverty, most people are unaware that they are being recruited by traffickers, she explained to the conference, which was organized by the Ghana Network of Talitha Kum.

Migrant people are particularly vulnerable because they “view the services of smugglers as an opportunity to move from impoverished conditions in their home countries to more stable, developed environments,” she added.

Sister Philomena Okwu, a member of the Daughters of Charity of St. Vincent de Paul and coordinator of the Committee for the Support of the Dignity of Women in Nigeria, told participants that steps to boost networking among religious communities can lead to long-lasting professional relationships that strengthen efforts to disrupt trafficking networks.

“Networking helps you craft your story to use in your daily communication and social channels,” she said.

In another session, Spiritan Father Richard Acheampong of the Archdiocese of Kumasi, Ghana, described how Catholic social teaching stressed the importance of human dignity, saying that trafficking violates the sacredness of life.

Human life, he said, deserves to be protected and nurtured. “We each have a responsibility to fight against violation and degradation of our brothers and sisters,” he said.

Jesuit Father Cornelius Apili, assistant director and program officer at the Arrupe Jesuit Institute in Accra, discussed how human trafficking is “rooted in the reality of poverty and the pervasive desire for poor people to migrate in search for better livelihood within and outside the region.”

“We must join our voices together in advocating for a change of mindset for our leaders,” he said, calling on religious institutions, nongovernment organizations and concerned individuals to alert government officials “to wake up to the reality of human trafficking.”