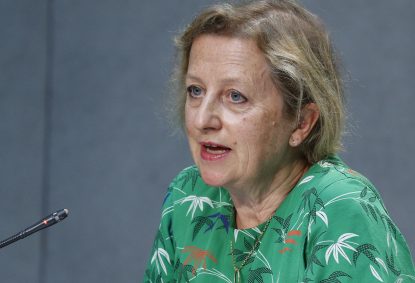 Sally Axworthy, British ambassador to the Holy See, speaks during a news conference at the Vatican June 17, 2021, to introduce the upcoming “Faith and Science: Toward COP26” meeting. Representatives of world religions will meet at the Vatican in October for a major conference on climate change. (CNS photo/Paul Haring)

VATICAN CITY (CNS) — On the feast of St. Francis, Oct. 4, leaders of world religions or their representatives will meet at the Vatican and in Rome to draft a statement to government leaders who will gather in Scotland in November for COP26, the U.N. climate summit.

The British and Italian embassies to the Holy See and the Vatican Secretariat of State have hosted six virtual meetings since February with close to 40 leaders from world religions and 10 top climate scientists. The leaders had a chance to share their faith’s understanding of creation and the human responsibility to care for it, and the scientists updated them on the latest research, said Sally Axworthy, the British ambassador to the Holy See.

“If the Holy Father goes, it’s in the competence of the trip organizers and that ain’t me,” he said with a chuckle. “I have to leave it at that, I’m afraid.”

In the virtual discussions with the faith leaders, Axworthy said, “there has been a remarkable convergence of views. All the faiths and belief systems see nature as sacred, and our duty as being to protect the environment.”

In addition, she said, “the leaders have drawn on their own traditions to suggest solutions: that we moderate our desires, rethink our economic model to be within the bounds of what nature can sustain, and focus on support for those least responsible for but most affected by climate change.”

The ambassador said organizers are not yet ready to release a list of the religious leaders who have been participating in the virtual meetings and do not yet have confirmation of who will attend the October gathering, but they tried to get leaders from all the world’s main religious groups and a mix of leaders from every part of the world.

The Vatican’s participation in the virtual meetings and preparations for the October event, “Faith and Science: Toward COP26,” was “a no-brainer” given Pope Francis’ emphasis on the need to care for the Earth and for its people, Archbishop Gallagher said.

While there is no denying “a wave of secularization” is washing over many countries, the archbishop also said religion and belief “remain an important part of the life of the vast majority” of the world’s population, and most government leaders recognize that and, even more, have a growing appreciation of the contributions religions can make to society.

The massive scope of the challenge of stemming climate change and protecting the environment “mean you have to draw on all of your resources,” including the teaching and guidance of the world’s religions, Archbishop Gallagher said.

Pietro Sebastiani, Italy’s ambassador to the Holy See, said the discussions have made clear that “climate change is also a moral question. We must act with urgency to respond to the threat of climate change,” especially the threat it poses for the world’s most economically or geographically vulnerable nations and for future generations.

PREVIOUS: Seen and unseen: The role of faith, reason in the search for alien life

NEXT: Pa. bishop among prelates named to Vatican’s supreme court