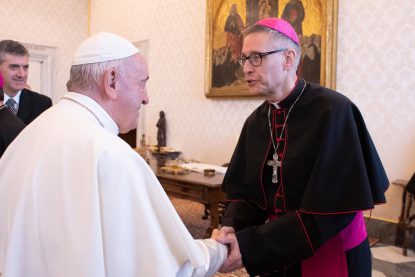 Pope Francis greets Bishop Mark L. Bartchak of Altoona-Johnstown, Pa., during a meeting with U.S. bishops at the Vatican in this Nov. 28, 2019, file photo. The pope has named Bishop Bartchak to be among the 12 members of the Apostolic Signature, the Vatican’s highest court. (CNS photo/Vatican Media)

The pope also nominated Bishop Mark L. Bartchak of Altoona-Johnstown, Pennsylvania, and Cardinal Gerhard Müller, former prefect of the Congregation for the Doctrine of the Faith, to be among the 12 members of the Apostolic Signature, the Vatican’s highest court.

Members of the Apostolic Signature serve as judges in the tribunal’s cases, which mainly involve appeals of lower-court decisions or of administrative decisions by other offices of the Holy See.

The appeals involve everything from challenges to the decisions of marriage tribunals to recourse against the dismissal of a religious, the transfer of a parish priest, the restriction of a priest’s ministry, removal of ministerial faculties, renovation of a parish church and dismissal from a teaching position.

Pope Francis also named seven leading professors of canon law to be consultants to the Apostolic Signature, including William Daniel, who teaches at The Catholic University of America, Washington.

PREVIOUS: Faith leaders to meet at Vatican in October to discuss climate change

NEXT: Vatican expresses concern about proposed Italian law on homophobia