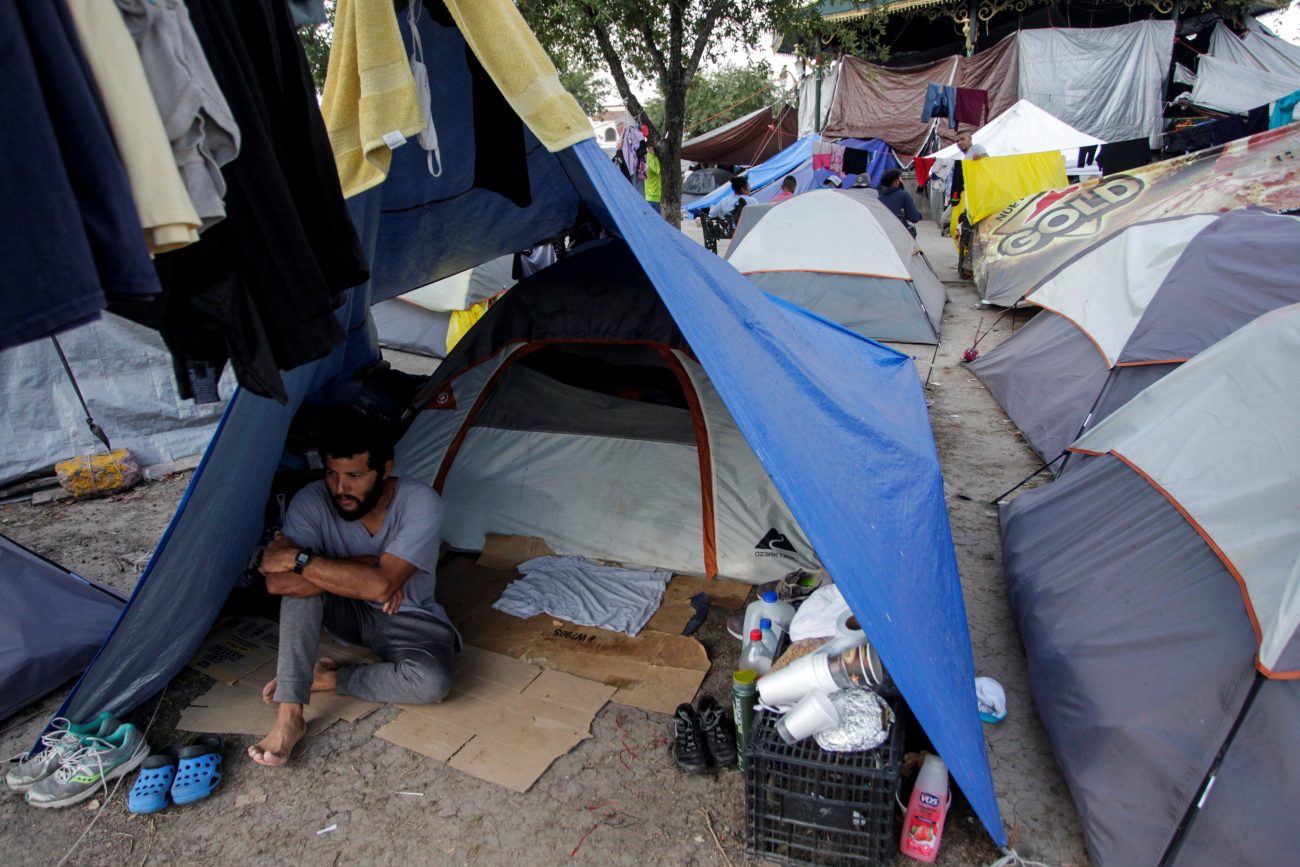 An asylum-seeking migrant sits inside a tent at a public square in Reynosa, Mexico, where hundreds of migrants are taking shelter, June 9, 2021. Pope Francis has written a letter to Bishop Eugenio Lira Rugarcía of Matamoros condemning recent drug cartel violence in the border city. (CNS photo/Daniel Becerril, Reuters)

“The Holy Father offers prayers for the eternal rest of the deceased and at the same time reiterates his strong condemnation of this episode of unjustifiable violence, which has caused mourning in this Christian community,” Cardinal Pietro Parolin, Vatican secretary of state, said in a June 25 letter to Bishop Eugenio Lira Rugarcía of Matamoros, whose diocese includes Reynosa.

“I beg (you) to convey the condolences of his holiness to the family members who mourn the loss of their loved ones, while asking the Lord … to convert the hearts of the violent and grant the bereaved spiritual consolation and serenity of life.”

The June 19 attacks terrorized Reynosa — a city just south of McAllen, Texas, and long plagued by drug cartel violence — as marauding gunmen killed people going about their daily lives in three neighborhoods. The victims included a taxi driver, a nursing student and a group of bricklayers, according to Mexican media.

Four suspects were killed in police pursuits after the attacks. On June 27, Mexican officials announced the arrests of eight individuals belonging to the Gulf Cartel, bringing the total number of detentions to 13.

Bishop Lira celebrated Mass for the victims and their families, though few people attended due to insecurity. He spoke of the violence gripping Reynosa.

“Who has taken from us those children, brothers, parents, friends, neighbors and colleagues, all of them unique and unrepeatable? Selfish and inhuman violence,” Bishop Lira said in his homily.

“But then, dazzled by money and power, we desperately seek them out, believing that there is nothing else (for us,) risking our own lives and disregarding the life, dignity and rights of others,” Bishop Lira said. “Those who act this way are already dead. Their mortal sins, as St. Bede says, have them locked in a coffin.”

The slayings in Reynosa occurred as Mexico confronts a spate of massacres, which have claimed at least 57 lives in five states in barely a week, according to the newspaper El Universal. That attacks — in regions with drug cartel conflicts — included seven people killed in a motorcycle repair shop in central Guanajuato state and 19 killed in a clash between drug cartels in north-central Zacatecas state. Franciscan Father Juan Antonio Orozco was slain in the crossfire of a shootout June 12, while traveling through a conflictive area of Durango state.

“The systematic violence that is experienced in Mexico’s national territory as a result of the activity of organized crime cannot be ignored, nor can the little or no commitment and training on the part of federal, state and municipal authorities to not only protect citizens, but also to carry out an adequate investigation to prosecute and punish this type of crime, thereby violating the human right to life, dignity and security of the population in general,” the Order of Friars Minor said in a June 17 statement.

Priests continue working in conflictive areas, though Auxiliary Bishop Alfonso Miranda Guardiola of Monterrey, the bishops’ conference secretary-general, said: “We don’t like it, we’re not happy about it, but we’re used to living in this present situation. … We have to work, celebrate Mass, offer prayers, do everything. But violence can’t stop us.”

The conference issued a lengthy statement on the violence in Mexico, which noted, “We see with sadness how our society has been considerably harmed by scenarios of insecurity and violence, which, far from diminishing, continue to threaten our communities.”

“We invite everyone … to build a future based on the capacity to commit to overcome divisions, favoring peace, reconciliation in the face of injustices (and) communion between all of us,” the bishops said. “We seek to transform persons and our communities, promoting a culture of dialogue and forgiveness, recognizing that God alone is the Lord of life and the fifth commandment says: Thou shall not kill.”