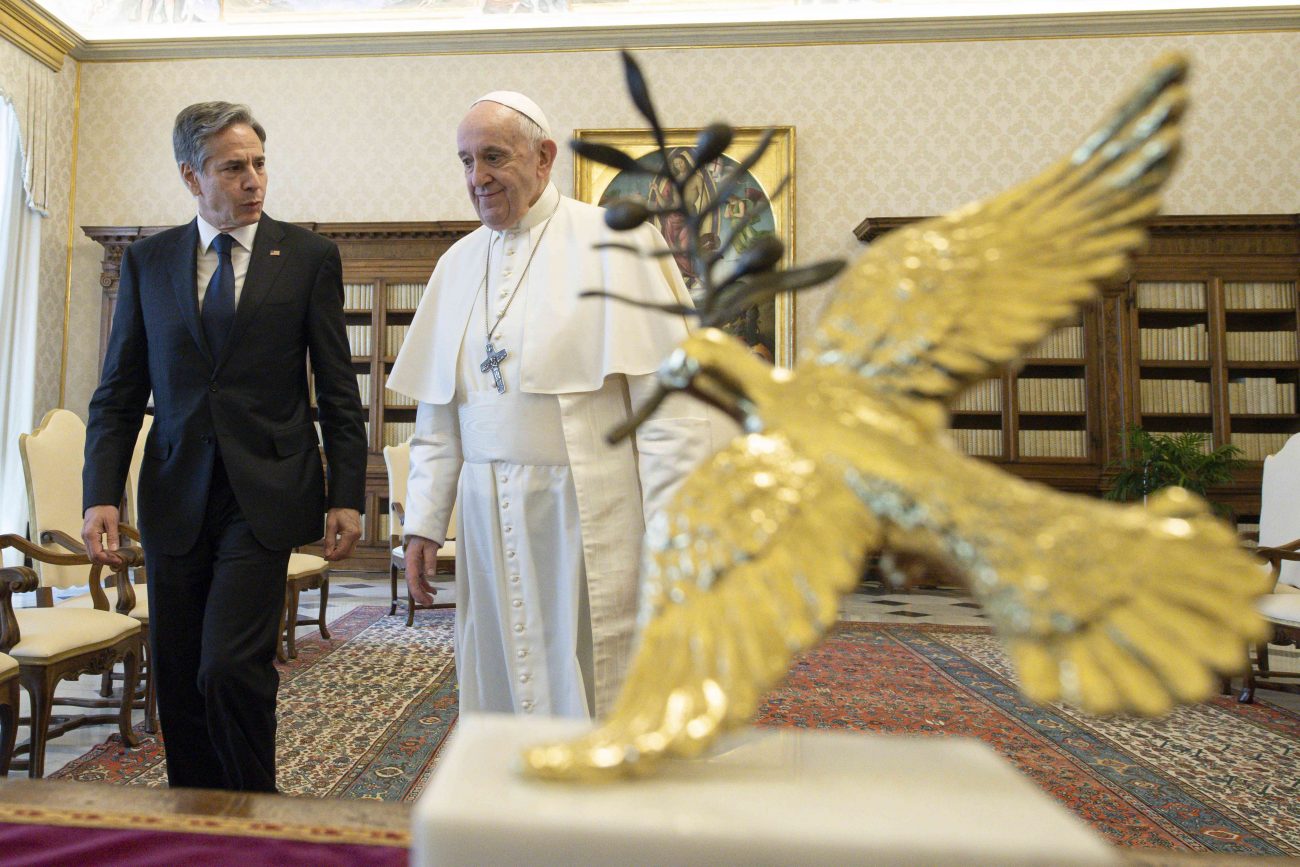 Pope Francis walks with U.S. Secretary of State Antony Blinken during an audience at the Vatican June 28, 2021. Blinken presented a sculpture to the pope of a dove holding an olive branch. (CNS photo/Vatican Media)

Vatican spokesman Matteo Bruni said that during the 40-minute meeting, which “took place in a cordial climate,” the pope recalled his 2015 visit to the U.S. and expressed “his affection and concern for the people of the United States of America.”

It was the pope’s second meeting with an official of the Biden Administration. In May, the pope met with John Kerry, President Joe Biden’s special envoy for climate.

While the Vatican provided scarce detail of the meetings, U.S. Secretary of State spokesman Ned Price said that during his meeting with the pope, Blinken reiterated the “United States’ commitment to working closely with the Holy See to address global challenges and the needs of the world’s least fortunate and most vulnerable, including refugees and migrants.

“The secretary thanked Pope Francis for his long-standing leadership on the need to care for the environment and tackle the climate crisis. The secretary and Pope Francis also discussed China as well as the humanitarian crises in Lebanon, Syria, the Tigray region of Ethiopia and Venezuela,” Price said.

Pope Francis and Blinken’s discussion on the issue of human rights and religious freedom in China is a particular area of concern for the Vatican.

Despite the 2020 renewal of an agreement between China and the Vatican on the appointment of bishops, authorities in China country continue to crack down on bishops, priests and seminarians for allegedly violating the country’s new regulations on religious affairs.

Before the end of his meeting with the pope, Blinken gave Pope Francis a sculpture of a dove holding an olive branch, which he said was a symbol “of peace and freedom.”

For his part, the pope presented Blinken with a bas relief depicting a mother with a child in her arms at the entrance to the colonnade of St. Peter’s Square. Behind her are migrants in a boat on the water while two hands are joined in front of the mother and child.

Beneath the image, the words “Riempiamo le mani di altre mani” (“Let’s fill our hands with other hands”) are engraved, which the Vatican has said refer to the pope’s appeals to welcome others and show mercy. The pope also gave him hard-bound copies of his encyclicals and apostolic exhortations.

Before departing the library of the Apostolic Palace, Blinken told Pope Francis that meeting him was “a great pleasure and an honor.”

At a briefing with journalists, Blinken said his meeting with the pope “was extremely warm and very wide-ranging,” and he praised Pope Francis’ leadership in standing “for human dignity in everything we do to the best of our ability.”

“We covered a lot of ground, and I certainly don’t want to speak for His Holiness but, just speaking for myself and speaking for the United States, I was very gratified by the meeting and gratified as well by the strong leadership of His Holiness on the pandemic, on climate change” and on the issue of migrants and refugees, he said.

Blinken was also asked his opinion of comments the pope made in a January television interview when he expressed consternation at people who were refusing to get the COVID-19 vaccine and described their refusal as “suicidal denialism.”

“I’m not going to speak for the pope in any way,” Blinken responded. “I think we strongly believe in the importance of the vaccination.”

The U.S. secretary of state explained that as long as the virus continues to replicate, it will mutate and worsen the chances of ending the pandemic.

In a tweet posted after the meeting, Blinken said he enjoyed his conversation with the cardinal and archbishop and that during the meeting, “we emphasized continued cooperation on efforts to promote our shared values and address humanitarian crises around the world.”

The U.S. secretary of state also “reiterated U.S. support for a return to democracy in Venezuela and our desire to help the Venezuelan people rebuild their country.”

Catholic bishops in Venezuela have been vocal about the country’s worsening political and humanitarian crisis, in which an increasingly authoritarian government led by President Nicolás Maduro, as well as an imploding economy, have forced more than 5 million people to leave since 2015.

Other issues discussed during the meeting were “migration, climate change and efforts to expand distribution of vaccines against COVID-19,” Price said.

In May, the pope announced he had invited Lebanon’s Christian leaders to meet at the Vatican July 1 “for a day of reflection on the country’s troubling situation and to pray together for the gift of peace and stability.”

NEXT: Writing about LGBTQ ministry, pope says God loves all his children