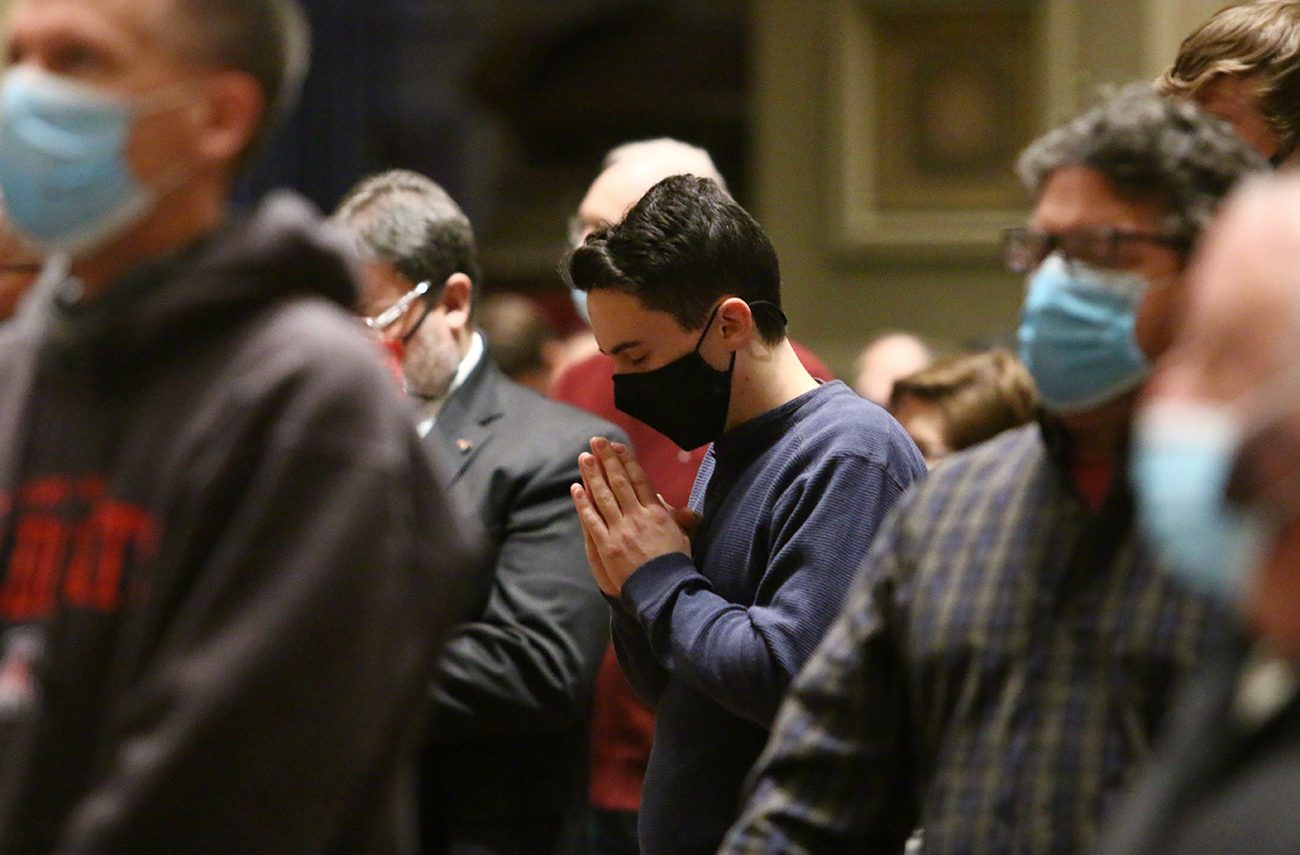 People pray during a Mass for life Saturday, Jan. 23 in the Cathedral Basilica of SS. Peter and Paul, Philadelphia. (Photo by Sarah Webb)

After some 16 months, the COVID-related dispensation from attending Sunday Mass in person is being lifted.

In a July 15 statement, Archbishop Nelson Pérez announced “each Catholic bishop in Pennsylvania will reinstate the obligation to attend Mass in person on Sundays and Holy Days” effective Aug. 15, the Solemnity of the Assumption of the Blessed Virgin Mary.

The obligation “does not apply to those who are seriously ill (or) have a serious health risk,” said the archbishop, nor to “those who have serious anxiety about being a part of large groups at this time.”

Those who care for those unable to attend Mass in person are also exempt, he said, noting that such exceptions are standard and “always the case.”

The obligation to attend Mass in person “comes from our baptism as Christians,” he said, which “compels Christians to unite themselves with Christ at the altar in his saving sacrifice of the cross.”

Citing Scripture, the Catechism of the Catholic Church and canon law, the archbishop said “participation in the communal celebration of the Sunday Eucharist is a testimony of belonging and of being faithful to Christ and to his church.”

Acknowledging the devastating impact of COVID — which to date has killed more than 4 million, with 188.6 million recorded cases — the archbishop stressed that “Jesus Christ, our Lord and Savior, has been with us throughout this challenging period.”

Christ is “especially near to us when we encounter him in the Eucharist,” said Archbishop Pérez, and “with the impact of the pandemic considerably reduced, it is again possible for the faithful to assemble for the Eucharist. It is time to lift the dispensation from the obligation.”

In March 2020, the bishops of Pennsylvania had jointly decided to dispense faithful from the obligation “in order to provide for the common good given concerns over the developing pandemic,” said the archbishop.

Following city, state and federal public health orders, public Masses were suspended in the Philadelphia Archdiocese on March 18, 2020 in order to slow the spread of the illness by limiting social contact.

The move followed those taken by bishops in other areas of the country where COVID’s impact was felt early on, including the Archdiocese of Seattle.

Parishes throughout the Philadelphia Archdiocese and across the globe quickly moved to livestream liturgies, with bishops encouraging the practice of making a spiritual Communion – an act of inviting Jesus into one’s being when reception of the physical host is not possible. The practice, part of Catholic tradition, typically relies on a well-known prayer composed by St. Alphonsus Liguori in the 18th century.

At the same time, most Catholic churches remained open daily for private prayer and for small-scale sacramental celebrations of penance, baptism, funerals and weddings.

Throughout the pandemic, archdiocesan officials worked closely with city and state health authorities in developing plans to resume full-scale, in-person worship. The “Arise” initiative offered guidance to parishes on ministering to faithful amid COVID restrictions, and preparing for the eventual resumption of parish life.

With Gov. Tom Wolf lifting many pandemic restrictions across the state in early June, public Masses resumed June 5-6 in the Philadelphia Archdiocese. Days prior, Archbishop Pérez unveiled “Nothing Compares to Being There,” a pastoral outreach exhorting Catholics to return to the in-person celebration of the Eucharist.

Yet although vaccinations are widely available and church doors have been open, many pews are still empty, prompting concern among pastoral leaders.

Daniel Cellucci, CEO of the Malvern-based Catholic Leadership Institute, posed the stark question in a national talk entitled “What if they don’t come back?”

Noting that church attendance is down despite a gradual post-pandemic return to normalcy, Cellucci challenged his audience to “ask ‘what if’ and write a new story,” relying on “the same confidence the early church had.”

In his statement, Archbishop Pérez echoed the same sense of hope.

“This is a moment to thank God anew for the great gift of the Mass and the Real Presence of Jesus to us in his holy body and blood, as well as the joy of gathering together as a people of faith.”

PREVIOUS: AbbeyFest returns to the place where it all began, in person