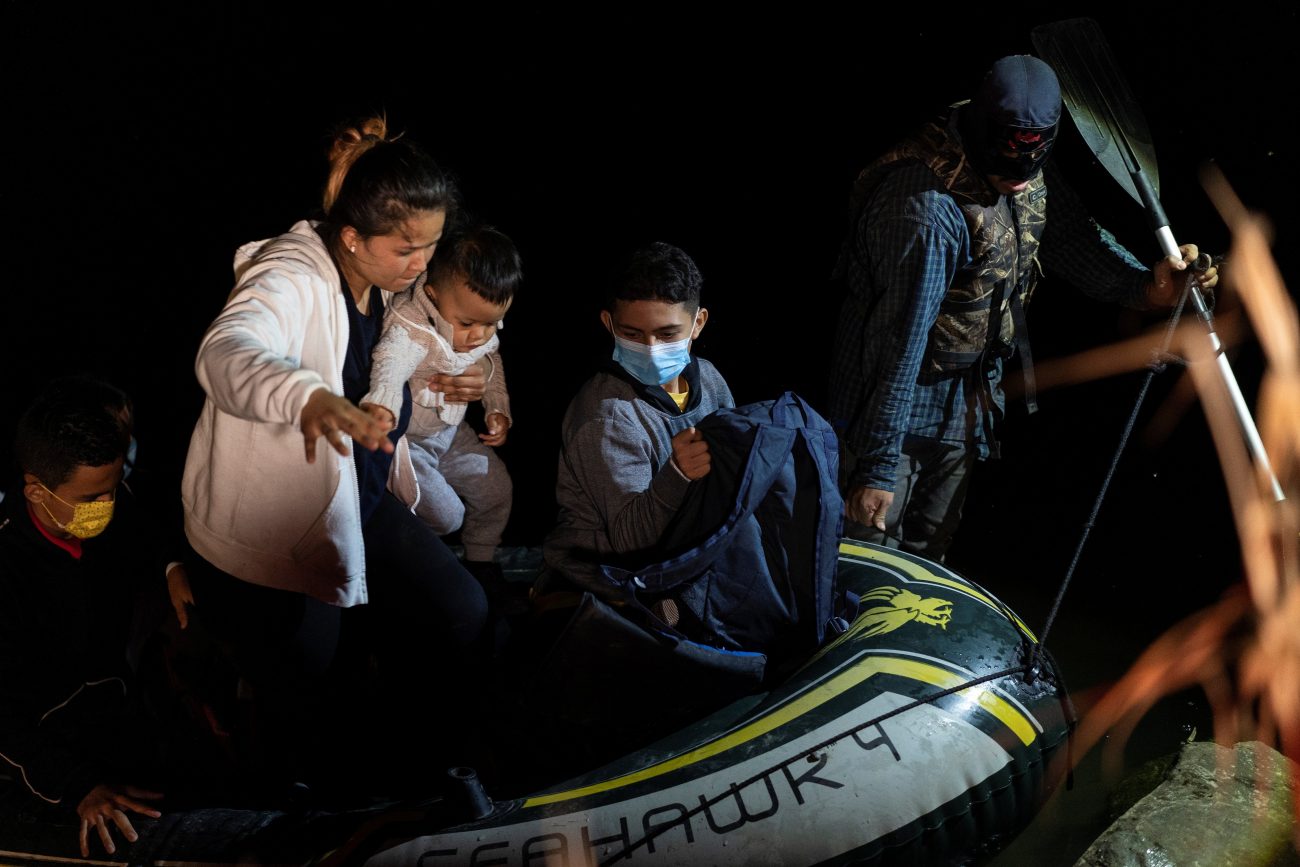 Migrant families seeking asylum in the U.S. disembark from an inflatable raft in Roma, Texas, May 6, 2021, after crossing the Rio Grande into the United States from Mexico. (CNS photo/Go Nakamura, Reuters)

He said the measure is to stop COVID-19 from spreading into the community. Some say such an order amounts to racial profiling.

The order came after a report that an immigrant family staying a Catholic-run shelter went out to a fast-food place and told a police officer who questioned them that they had tested positive for COVID-19.

Sister Norma Pimentel, a member of the Missionaries of Jesus, who is executive director of Catholic Charities of the Rio Grande Valley in Brownsville, Texas, tried to clarify what happened in a Facebook Live video July 29.

The family involved was quarantined at a hotel where the Catholic nonprofit had placed them after they were released by Border Patrol and tested positive for the virus.

Catholic Charities of the Rio Grande Valley, in the Brownsville Diocese, has a long history of helping migrants released from federal custody with food and shelter before they go to their final destinations in the U.S.

Because of COVID, Sister Pimentel explained, families who have a member test positive are quarantined in a hotel. Though it’s not a requirement that all members quarantine, some families just want to stay together. It’s a practice Catholic Charities RGV put place since the pandemic.

The incident, she said, came about because “one of the families decided to go out of the (hotel) room and go buy a hamburger,” but that doesn’t mean that all of them do that, she said.

“What we’re seeing today, this misinformation, that it’s everybody, families are all over, exposing everybody to COVID, it’s false. It’s not true,” she said in the Facebook Live interview conducted by the Diocese of Brownsville.

Brownsville Bishop Daniel E. Flores went on Twitter July 28 after the order was announced to denounce the measure.

“Catholic Charities RGV assists families who are referred to us by Border Patrol, a federal entity. How can the Governor’s order identify them as ‘illegal’ and how does looking for them not constitute racial profiling of persons legally in the US?” he tweeted.

Catholic Charities RGV usually buses migrants to their shelters, and now to hotels to quarantine. The order could greatly affect the charity’s and other nonprofits’ daily operations.

The Republican governor’s order said that “no person, other than a federal, state, or local law enforcement official shall provide ground transportation to a group of migrants who have been detained by CBP (Customs and Border Protection) for crossing the border illegally or who would have been subject to expulsion under the Title 42 order.”

The Title 42 order is a public health measure enacted by the Trump administration in March 2020 in an effort to keep migrants from crossing over U.S. borders, saying it is to protect people from the spread of COVID-19. The Biden administration has kept it in place, but some exceptions have been made and it does not apply to minors.

The governor’s order, referring to the incident involving the Catholic nonprofit, said that “busloads of migrants, an unknown number of whom are infected with COVID-19, are being transported to communities across the state of Texas exposing Texans to the spread of COVID-19, as has already been reported in cities like La Joya, among others.”

But a statement from Sister Pimentel released by Catholic Charities RGV said that “at no time” have COVID-positive immigrant families been walking around exposing others in the community.

“They are kept in isolation until they test negative,” Sister Pimentel said. “The La Joya incident is an isolated case, in a new location we had just begun to use. This one incident has caused a great deal of misinformation and unfortunately serious consequences.”

She said the community can remain safe while others help “our guests who need our care with dignity and respect.”

Referring to the governor’s order, she said that “any law or policy that contributes to human suffering is wrong and needs to be corrected.”

“I urge state and local leaders to reconsider their actions and work with us and other community partners to help ensure that all individuals, whether long-term community members or newcomers fleeing violence are treated with dignity and that together we work to keep our community safe,” she said.

A local report on valleycentral.com said authorities were called to the fast-food place after “someone waved down police alerting them that there was a family coughing, sneezing and not wearing masks, according to police.”

NEXT: House’s refusal to include Hyde in spending bills is called an ‘injustice’