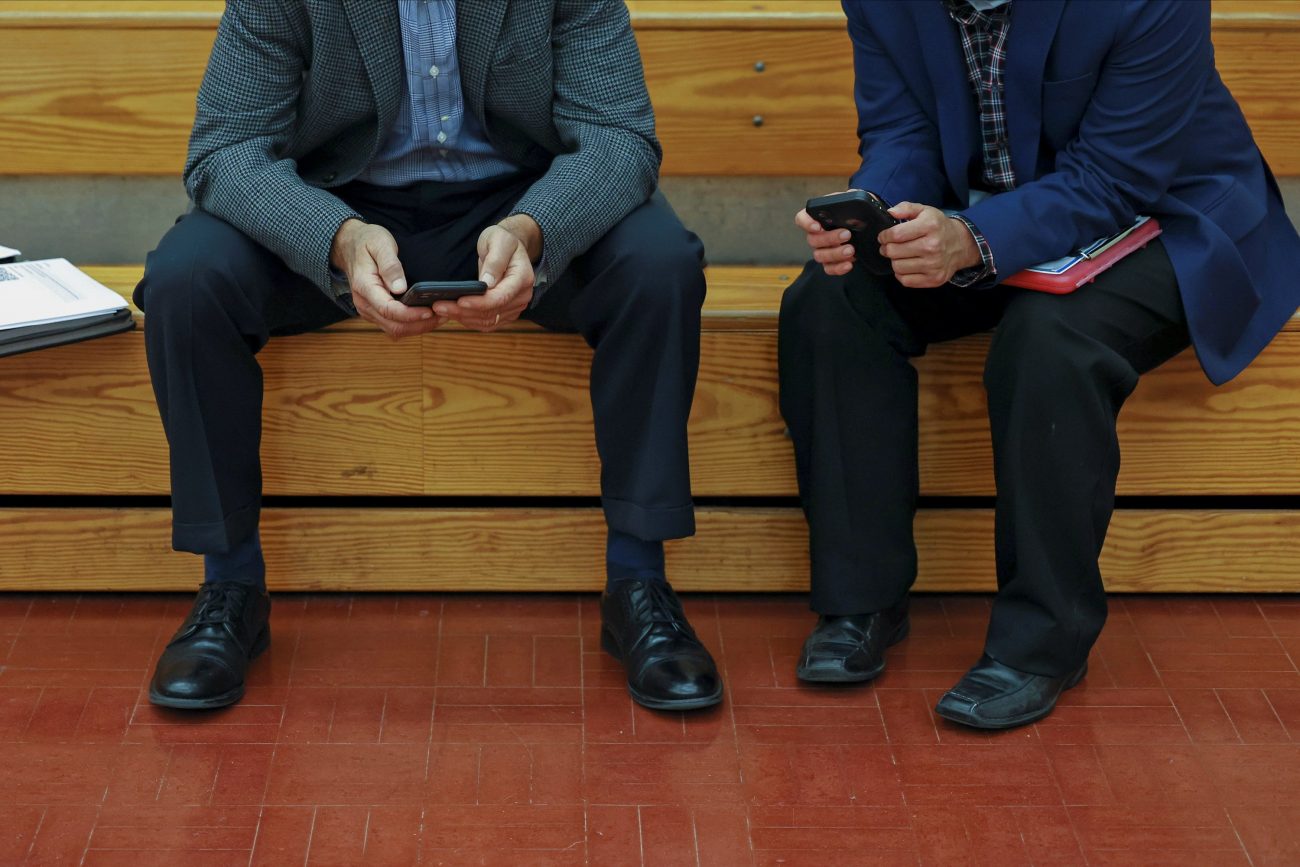 People use their smartphones in this illustration photo. (CNS photo/Chris Aluka Berry, Reuters)

UPDATED – NEWARK, N.J. (CNS) — The Archdiocese of Newark said July 28 it had “formally requested,” but not yet received, the data and analysis used by a publisher for its report on “possible inappropriate software app use by certain clergy within the archdiocese.”

“Therefore, we are unable to review the reported information until data is provided,” the archdiocese said in a statement.

The publisher is The Pillar, an online outlet that covers the Catholic Church and provides news and analysis.

The Newark Archdiocese said it was informed by the publisher that its report “is based on the collection of app use data on mobile devices in certain locations.”

“Many consider this data collection to be controversial and morally suspect due to its potential to harm the reputations of innocent individuals who may not have engaged in misconduct of any kind,” the archdiocese said July 28 and in an earlier statement.

“Although the purported information conveyed to the archdiocese does not provide any evidence of misconduct by archdiocesan clergy or employees, we recognize that any app or technology has the potential for misuse or abuse, which would be of concern.”

“This matter is to be evaluated and further reviewed,” it said, “pending the receipt of the publisher’s data and analysis.”

“We are committed to protecting the faithful,” the archdiocese added, “and when we learn of any immoral behavior or misconduct, we immediately take appropriate measures to address concerns and reinforce this commitment.”

On July 23, The Pillar said it contacted the Newark Archdiocese “after a review of commercially available app signal data showed patterns of location-based hookup app use at more than 10 archdiocesan rectories and clerical residences during 2018, 2019 and 2020. There are 212 parishes in the Newark Archdiocese.”

The online outlet said it had “legally obtained” the analysis of commercially available signal data and had confirmed its “authenticity.”

The data, it said, “shows evidence that both homosexual and heterosexual hookup apps were used in parish rectories or other clerical residences with a frequency suggesting, in several cases, residence in those locations.”

The Pillar said the names, addresses or telephone numbers “of particular users” are not identified, but the data collected and sold with “the consent of users can include the usage location of particular devices at particular times.”

“Without compelling public interest regarding individual priests serving in archdiocesan ministries, The Pillar did not undertake to de-anonymize data about parish rectory app usage,” the outlet said in its report.

Newark Cardinal Joseph W. Tobin, in response to a question July 28, said that anyone using such apps does so in violation of the promises they made when ordained or entered religious life.

The question was asked during a Georgetown University panel discussion on Catholics and the reception of the Eucharist.

“I think … if someone who made a promise of celibacy has a dating app on his or her phone, that is asking for trouble,” the cardinal said.

He also questioned the ethics “around the collection of this data of people who allegedly may have broken their promises.”

“Certainly, the information that has been shared with the archdiocese is very general and I can’t comment on that,” the cardinal said.

The Pillar report on the Newark Archdiocese came three days after a similar Pillar report had triggered the resignation of a high-ranking U.S. Catholic official July 20.

Msgr. Jeffrey D. Burrill resigned his post as general secretary at the U.S. Conference of Catholic Bishops in Washington after the conference was contacted by The Pillar regarding evidence the news outlet claimed to have found showing the priest had “engaged in serial sexual misconduct” while overseeing, it asserted, church response to the sex abuse scandal.

“What was shared with us did not include allegations of misconduct with minors. However, in order to avoid becoming a distraction to the operations and ongoing work of the conference, Monsignor has resigned,” the archbishop said.

“The conference takes all allegations of misconduct seriously and will pursue all appropriate steps to address them,” he said.

“An analysis of app data signals correlated to Burrill’s mobile device shows the priest also visited gay bars and private residences while using a location-based hookup app in numerous cities from 2018 to 2020, even while traveling on assignment for the U.S. bishops’ conference,” The Pillar reported.

As it noted later with regard to information it said it had on clergy in the Newark Archdiocese, The Pillar said in its story on Msgr. Burrill that commercially available app signal data “does not identify the names of app users, but instead correlates a unique numerical identifier to each mobile device using particular apps.”

The Pillar also has similarly reported on an analysis of data on “the use of location-based hookup apps” within Vatican City, saying it shows “that during a period of 26 weeks in 2018, at least 32 mobile devices emitted serially occurring hookup or dating app data signals from secured areas and buildings of the Vatican ordinarily inaccessible to tourists and pilgrims.”

The Pillar reports have sparked a fresh discussion about journalism ethics and also sparked a backlash from a variety of religious media outlets and individual writers concerned over national security-level surveillance tools being used to track church staff.

Steven P. Millies, associate professor of public theology and director of the Bernardin Center at Catholic Theological Union in Chicago, wrote a scathing essay critical of The Pillar’s report on Msgr. Burrill, writing that whatever else can be said of their practice of Catholicism, The Pillar’s investigators also paid little heed to the canons of ethics for journalists.

“How did they get their story? The Society for Professional Journalists’ Code of Ethics encourages journalists to ‘avoid using undercover or other surreptitious methods of gathering information’ and admonishes that ‘pursuit of the news is not a license for … undue intrusiveness,'” Millies wrote.

“I am not sure what the investigators at The Pillar believe, he added. “I feel comfortably sure that before they embarked on their ‘investigation,’ they must not have thought about the Code of Canon Law, which states, ‘No one is permitted to harm illegitimately the good reputation which a person possesses nor to injure the right of any person to protect his or her own privacy.'”

NEXT: Boston Globe: Police charge McCarrick with assault in case dating to 1970s