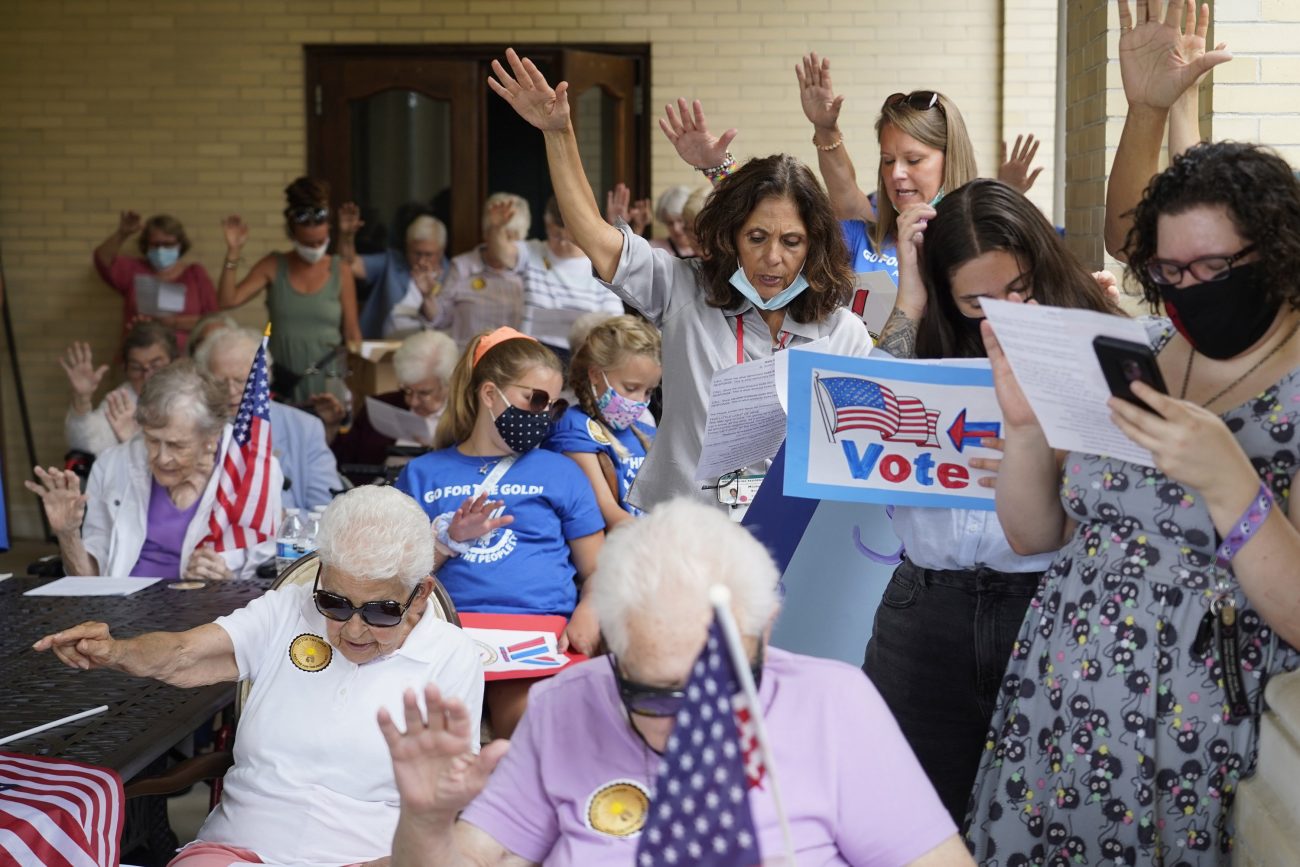 Members of the Sisters of St. Joseph of Brentwood, N.Y., other women religious and laypeople read a prayer of blessing during a rally in support of the For the People Act at the Sisters of St. Joseph motherhouse in Brentwood July 26, 2021. Following the event, a letter urging Congress to pass the voting-rights legislation -- signed by 3,685 religious sisters from various congregations across the nation -- was hand-delivered to the Long Island office of Senate Majority Leader Chuck Schumer, D-N.Y. (CNS photo/Gregory A. Shemitz)

Following the event, a letter signed by 3,685 religious sisters from various congregations across the nation urging Congress to pass the measure was hand-delivered to the Long Island office of Senate Majority Leader Chuck Schumer, D-N.Y.

“As Catholic women religious, we see and affirm the dignity of every person,” stated the letter, which also was addressed to President Joe Biden. “Knowing that all people are made in the likeness of God, we cannot tolerate practices or policies that suppress voters’ ability to participate fully in our democracy,” especially people of color in in the United States.

“Every voice — every vote — is sacred. The Senate’s recent failure to pass S. 1, For the People Act, rejects this holy truth,” it said.

Saying “our democracy is in crisis,” the sisters said that “immediately after” the 2020 election, during which Black, Latinx, Native American, Asian American and Pacific Islander women “made their voices heard in record numbers” — despite the pandemic and “partisan obstacles” — Republican state legislators began writing and passing “new laws to suppress the vote.”

The sisters also pointed to “insurrectionists” who “mounted a violent attack on our democracy” by rioting outside and inside the U.S. Capitol Jan. 6 while Congress met to certify the 2020 election results.

Since then, they said, Senate Minority Leader Mitch McConnell, R-Ky., and other members of Congress “have only increased their opposition to the For the People Act.” On June 22, in 50-50 vote, the Senate failed to end debate on the bill to bring it to a vote on the Senate floor.

The provisions of the nearly 800-page bill include creating a national system for automatic voter registration, requiring transparency for political advertising and instituting nonpartisan redistricting commissions.

Opponents of the bill say its sweeping changes also would federalize the election process administered by the states and make permanent changes in voting procedures meant to be temporary that were put in place by election officials in many states to help voters cast their ballots amid a pandemic.

Some states, for example, added days for voting and loosened restrictions as to who qualified for mail-in ballots so voters could avoid in-person voting.

AP quoted McConnell as describing the bill as “a solution looking for a problem” and vowing to “put an end to it.”

In their letter, the women religious said many of the provisions in the For the People Act “are modeled on best practices from bipartisan laws passed in states.” The bill is “popular among voters across the country” and “it is sorely needed,” they said.

“Minority opposition” to the measure “must not keep Congress from passing critical democracy reform any longer, the letter said, urging the Senate to bypass the filibuster and “pass this legislation” for the good of the country.

The letter quoted Pope Francis’ encyclical “Fratelli Tutti, on Fraternity and Social Friendship”: “What do certain words like democracy, freedom, justice or unity really mean? They have been bent and shaped to serve as tools for domination.”

“It is up to us to make these concepts real,” the letter said, adding that likewise, “the idea of ‘bipartisanship’ cannot be twisted to obstruct reforms to save our very democracy. We the people must keep striving to create the multiracial representative democracy enshrined in our Constitution.”

They called on all U.S. senators to “fulfill their oath to defend the Constitution, serve your constituents and protect our democracy and pass S. 1, the For the People Act.”

A Network news release said Schumer issued a statement applauding the sisters for their letter. He accused Republican state legislatures across the country of engaging “in the most sweeping voter suppression in 80 years.”

He said the Senate vote on the For the People Act was just “the starting bell” in the “fight to protect democracy.”

As Senate Majority Leader, “I am exploring all options to bolster voting rights and advance democracy-reform legislation for another vote on the Senate floor,” he said.

NEXT: N.J. archdiocese says it has requested but not yet received data, analysis