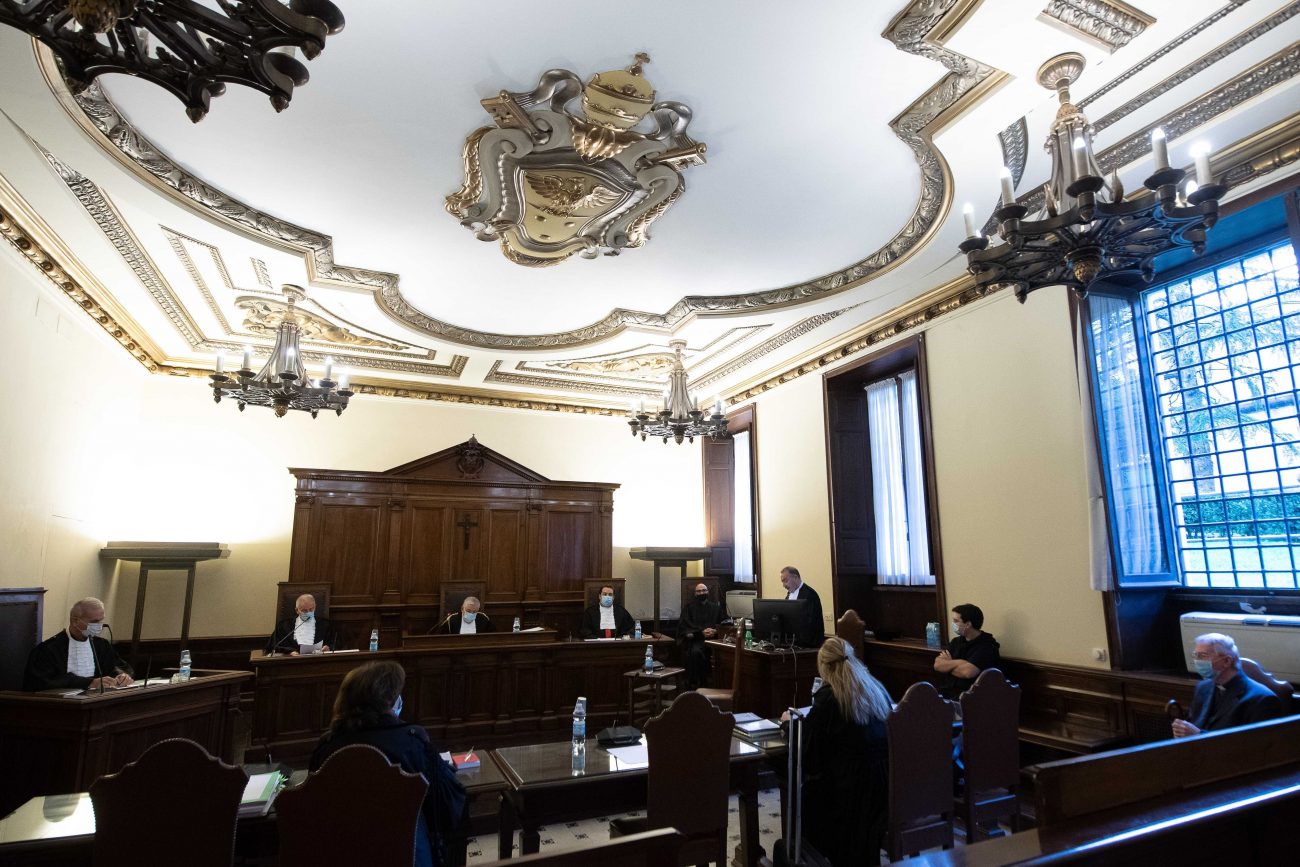 This Oct. 14, 2020, file photo shows the Vatican City State criminal court during the opening of the trial of Father Gabriele Martinelli and Msgr. Enrico Radice. Father Martinelli is accused of repeatedly sexually abusing a younger student at the Vatican's St. Pius X Pre-Seminary. At the trial, Vatican prosecutor Roberto Zanotti recommended the priest be sentenced to six years in prison. (CNS photo/Vatican Media)

VATICAN CITY (CNS) — A Vatican prosecutor requested that Father Gabriele Martinelli, who is accused of sexually abusing a younger student at the St. Pius X Pre-Seminary, be sentenced to six years in prison if convicted.

At the 11th session of the Vatican criminal trial July 15, Roberto Zanotti, the prosecutor, explained that the recommended sentence for the crimes of aggravated rape and aggravated lewd acts was reduced to exclude acts allegedly committed before Father Martinelli, then a student, turned 16 in August 2008. The abuse was said to have occurred between 2007 and 2012.

Zanotti also recommended that Msgr. Enrico Radice, the former rector of the minor seminary and Father Martinelli’s mentor, be sentenced to four years in prison for “aiding and abetting sexual violence.”

Msgr. Radice is accused of hindering the investigation into the abuse allegations. The seminary, which is operated by the Diocese of Como, and the Opera Don Folci, the religious institution that runs the minor seminary, also are accused of failing to protect the young students.

Although Father Martinelli and L.G., the victim, both were under the age of 18 when the abuse was said to have begun, the court accused the priest of continuing to abuse the younger student when Martinelli, not yet a priest, was already 20.

The court heard the testimony of two witnesses, Father Andrea Stabellini, a former judicial vicar for the Diocese of Como who was involved in the diocese’s initial investigation in 2013, and Domenico Parrella, a former student at the minor seminary, who addressed the court briefly.

In his testimony, Father Stabellini said that despite his recommendations, retired Bishop Diego Coletti of Como did not launch a formal investigation into the accusations and simply brought Father Stabellini with him to Rome to visit the minor seminary.

However, he was asked to remain outside when the bishop spoke with Msgr. Radice, Cardinal Angelo Comastri, former archpriest of St. Peter’s Basilica, and Father Angelo Magistrelli, the current rector of the St. Pius X Pre-Seminary and superior of the Opera Don Folci, Father Stabellini told the court.

After the meeting, the priest said, Bishop Coletti “told me to draft a memorandum and that everything had to be closed.”

He also said Msgr. Radice sent letters to him and Bishop Coletti requesting “that the matter be closed because it was ‘fumus persecutionis,'” a Latin phrase indicating a suspicion that a person is being persecuted.

The former judicial vicar said that shortly after drafting the memorandum, he resigned from his position. Father Stabellini also said the file of the investigation, which he reviewed with the current bishop of the diocese, Bishop Oscar Cantoni, “was very poor” and that “some acts were no longer there.”

During closing arguments, Dario Imparato, the victim’s lawyer, addressed the court for nearly an hour reconstructing the events of the alleged abuse and criticizing the investigation for focusing on the defendant’s sexual orientation.

Father Martinelli’s homosexuality is not the point, he said, but rather “the violent actions of a powerful and overbearing subject who, before satisfying his libido, wanted to satisfy his thirst for power,” which came from “an unhealthy relationship” with the former rector, Msgr. Radice.

“This case speaks of the failure of small, closed communities that are impervious to the outside world,” which fosters abuse of power, he said.

Urging the court to convict the defendants, Imparato said he hoped that Father Martinelli would not be given the chance to “boast the medal of acquittal for deeds the defense considers grave.”

“Often to try a system, you have to try an individual,” he said.

Continuing with closing arguments July 16, lawyers representing Father Martinelli and Opera Don Folci called for the charges to be dropped against their clients, citing inconsistencies in the accounts given by L.G. and Kamil Jarzembowski, another former student who claimed to have witnessed the abuse.

Father Martinelli’s lawyer, Rita Claudia Baffioni, argued that given the fact that both the defendant and the victim were underage, charges should be dropped since it did not fall under the legal definition of abuse.

Baffioni also attacked the credibility of L.G., saying that while he complained about “psychological suffering” due to the abuse, his “photos on social media show the truth of the facts; not suffering but paying particular attention to his own physique.”

She also said Jarzembowski “lacked credibility” and implied that his testimony and L.G.’s testimony “seemed as if they were recited from a script, using common expressions from psychoanalytical literature.”

All other witnesses, Baffioni added, heard about the abuses “from Kamil and always from Kamil.”

Giuseppe Pignatone, president of the Vatican City State criminal court, announced that a verdict would be given Oct. 6.

NEXT: Authority in a wounded church: Leaders see ‘synodality’ as way forward