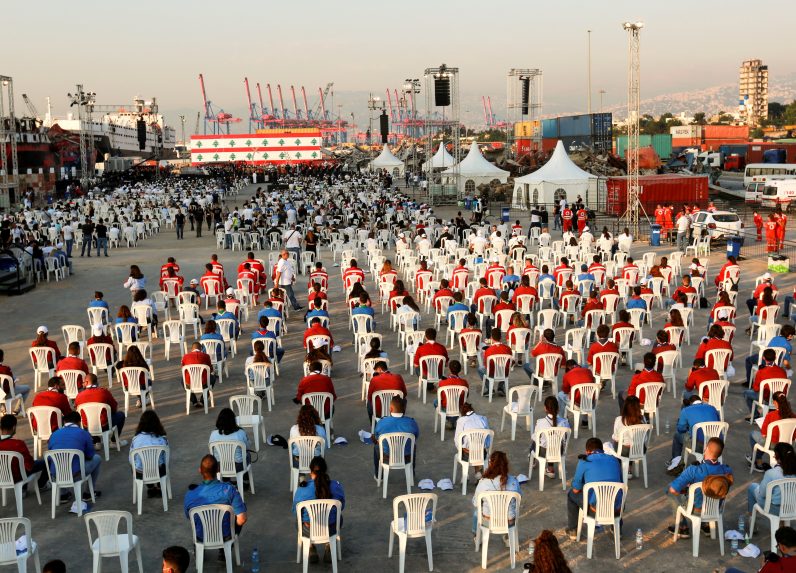 People attend a Mass celebrated by Cardinal Bechara Rai, Maronite patriarch, to mark the one-year anniversary of Beirut’s port blast Aug. 4, 2021. The cardinal has come under pressure for speaking out on behalf of the people of Lebanon. (CNS photo/Mohamed Azakir, Reuters)

WASHINGTON (CNS) — Advocates, political leaders and a Maronite Catholic bishop gathered on Zoom for a virtual seminar to express support for Lebanon’s Maronite patriarch, who came under pressure after calling for the Lebanese army to take control of the southern part of Lebanon, where Hezbollah is engaging in skirmishes with Israel.

Cardinal Bechara Rai, Maronite patriarch, also said Aug. 8 that the Lebanese Armed Forces should enforce a 2006 U.N. Security Council resolution that requires the disarmament of all armed groups in Lebanon. He said Lebanon does not wish to be involved in military actions that elicit destructive Israeli responses.

Afterward, an image of the patriarch with a noose superimposed on his neck circulated on social media.

Cardinal Rai has “no political agenda,” Maronite Bishop A. Elias Zaidan of Our Lady of Lebanon of Los Angeles told those on the Aug. 12 Zoom call, sponsored by In Defense of Christians, a Washington-based nonprofit advocating for the protection and preservation of Christians and Christianity in the Middle East.

The cardinal’s remarks consistently are on behalf of the people of Lebanon, who are saying, “We want to eat. We want to survive,” Bishop Zaidan said.

In Lebanon, Archbishop Paul Nabil Sayah, deputy for external relations for the Maronite Patriarchate, told Catholic News Service Aug. 13 that he had no knowledge of direct threats to Cardinal Rai.

He said the patriarchate would not “enter into polemics” with those who posted on social media “because we don’t want to go that low.”

Archbishop Sayah said he presumed the posts came from Hezbollah. The Shiite military group and political party backed by Iran has been labeled a terrorist group by the United States. It has come under scrutiny from Lebanese during the country’s continued economic and political crisis.

“Anyone can post anything from anywhere,” Archbishop Sayah said. “The chances are, if it’s not Hezbollah, it’s their own crowd. I don’t know. They have not addressed themselves to us with a clear message.”

He added that while Maronite leaders respected all people’s opinions, “they should respect ours as well.”

“In Lebanon, we thought we had freedom of speech. Apparently for some people, they don’t want Lebanon with freedoms. Well, that’s not the Lebanon we want. Then, let them go and look for the place they want to live if that’s the kind of life they want — a one-voice country. They’ll find plenty of them (such countries) in the region, every one of them (countries), actually.” 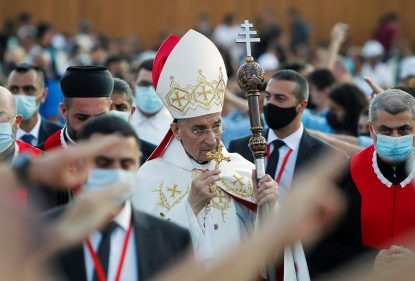 Cardinal Bechara Rai, Maronite patriarch, arrives to celebrate a Mass to mark the one-year anniversary of Beirut’s port blast Aug. 4, 2021. The cardinal has come under pressure for speaking out on behalf of the people of Lebanon. (CNS photo/Mohamed Azakir, Reuters)

The archbishop also noted that Patriarch Rai “is carrying on with what he thinks ought to be said or done for Lebanon. He is pursuing efforts to implement this active neutrality, and he is also working on convening an international conference for Lebanon. Those are two objectives he has proposed. We are trying internally and externally to promote those ideas. We keep trying.”

Repeatedly, Cardinal Rai has called for an international conference on Lebanon, which has not had a government since shortly after the Aug. 4, 2020, Beirut port explosion. In his Mass for victims marking the explosion’s anniversary — no government officials or politicians were invited — and in his Aug. 8 homily, Cardinal Rai took Lebanese leaders to task for their inaction.

“How will you convince the people that you are worthy to lead them toward salvation while every day you drag them into a new crisis?” the cardinal asked politicians in his Aug. 8 homily. “How will you convince the world that you are worthy of assistance while you do not care about the international conferences devoted to the relief of the Lebanese people and that are ready to save Lebanon?”

“You wrestle over ministries, but you wrestle over what you do not have because they belong to the people. Rather, look for ministers worthy of ministries, not ministries that secure your interests,” he told them. “We call upon every official who feels that he has the authority to assume his responsibilities (to) form the government, save the country immediately, and carry out his duties toward his people and country.”

Participants in the In Defense of Christians Zoom noted that while the cardinal has called for the Lebanese Armed Forces to disarm Hezbollah, the army — like the rest of the country — is in bad economic shape.

They played a clip of Congressional testimony by Mira Resnick, a State Department official who deals with regional security in the Bureau of Political-Military Affairs. She called the Lebanese Armed Forces the sole defender of Lebanese security and stability and noted that, without them, “Hezbollah fills the void.”

IDC Executive Director Richard Ghazal called for more U.S. government support so the Lebanese army can have air, ground and intelligence superiority over Hezbollah. “Their stomachs are virtually empty” and they need a living wage, he said, asking how such a force could stand up to a well-financed terrorist organization.

NEXT: Justice Department drops case of conscience on abortion