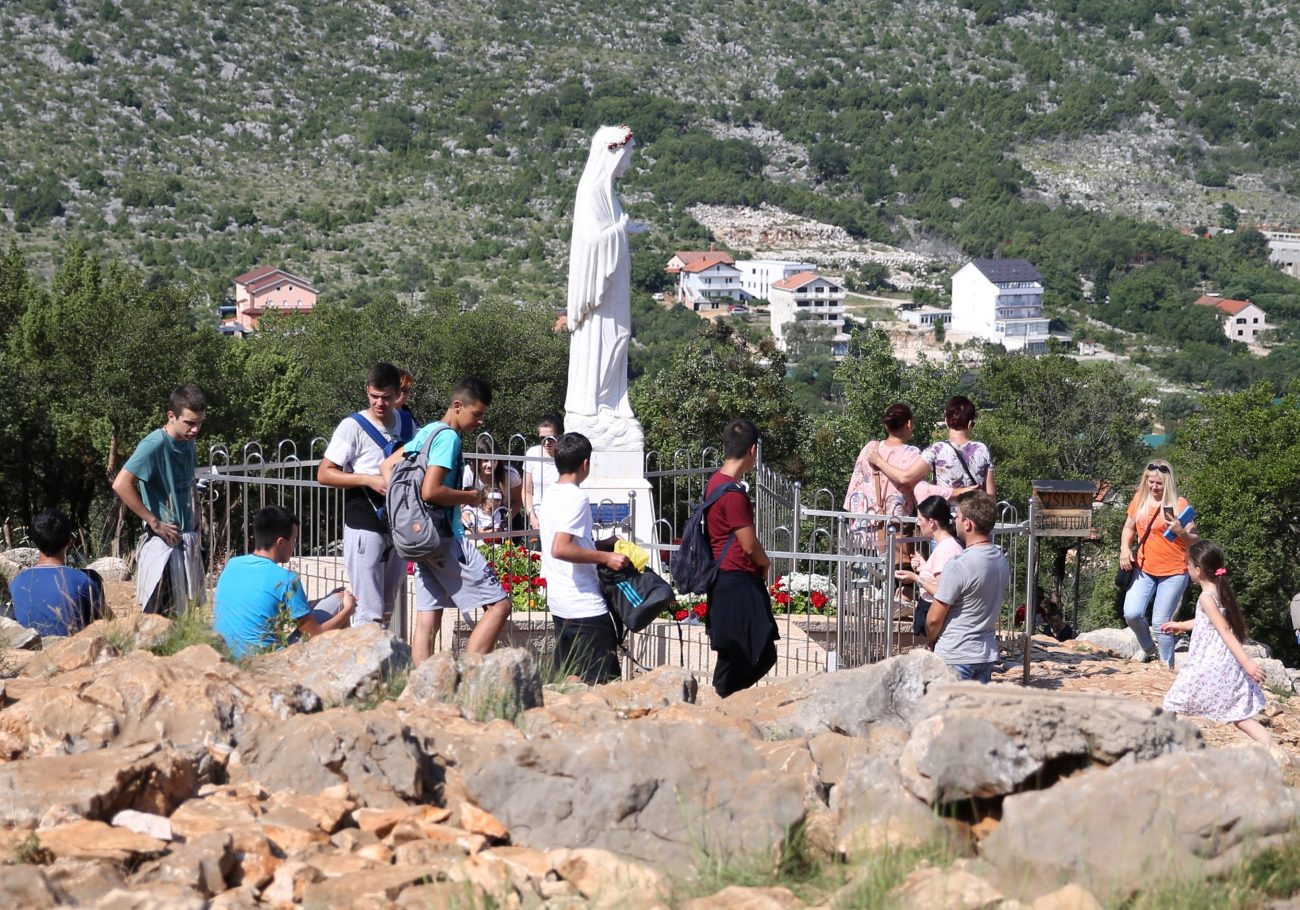 Young pilgrims surround a statue of Mary on Apparition Hill in Medjugorje, Bosnia-Herzegovina, July 25, 2020. In a message released Aug. 2, 2021, Pope Francis asked young people meeting at the shrine for the International Youth Festival Aug. 1-8 to follow Mary's example in wholeheartedly accepting God's will, bringing Christ to the world and being attentive to the needs of others. (CNS photo/Dado Ruvic, Reuters)

VATICAN CITY (CNS) — Pope Francis asked young people meeting at the Medjugorje Marian shrine to follow Mary’s example in wholeheartedly accepting God’s will, bringing Christ to the world and being attentive to the needs of others.

“With her life, she shows us that our joy is found in God’s will and that accepting it and living it is not easy, but will make us happy,” the pope wrote to participants at the International Youth Festival in Medjugorje, Bosnia-Herzegovina.

The pope’s message, released to journalists Aug. 2, was read at the festival Aug. 1.

Although the festival has been taking place for more than 30 years, it became an officially approved church festival in 2019 after Catholic pilgrimages to the site of alleged Marian apparitions were authorized by the pope.

The 2020 festival was limited to visitors from Switzerland and the European Union because of the COVID-19 pandemic. This year’s festival, Aug. 1-8, was open to any young person with a proof of vaccination or with a recent negative COVID test.

The theme chosen for 2021 was the question the rich young man in the Gospel of Matthew asks Jesus, “What good thing must I do?”

The first step, the pope said, always is to set off, which is precisely what the young people were doing by going to Medjugorje.

“The Gospel does not tell us the name of that young man, and this suggests that he can represent each one of us,” the pope told them. In addition to having a certain wealth, he also seems well educated and motivated by “a healthy restlessness” that pushes him to seek truth, happiness and life to the fullest.

Jesus tells him that to gain eternal life, he must obey all the commandments, which the young man assures Jesus he does.

Then he asks what more he should do, but when Jesus tells him to sell his possessions and give the money to the poor, he goes away sad.

“Jesus changes perspective,” the pope said. “He invites him not to think about securing the afterlife, but to give everything in his earthly life, thus imitating the Lord.”

That step, he said, is not a condemnation of having things. “It is a call to further maturity, to pass from observing precepts in order to obtain rewards to loving gratuitously. Jesus asks him to leave behind all that weighs down his heart and hinders love.”

What Jesus is proposing is not so much about being poor materially as it is about being “free and rich in relationships,” the pope said. If one’s life is full of things, there is less room for God and for other people.

“Our having too much and wanting too much suffocates the heart and makes us unhappy and unable to love,” Pope Francis said.