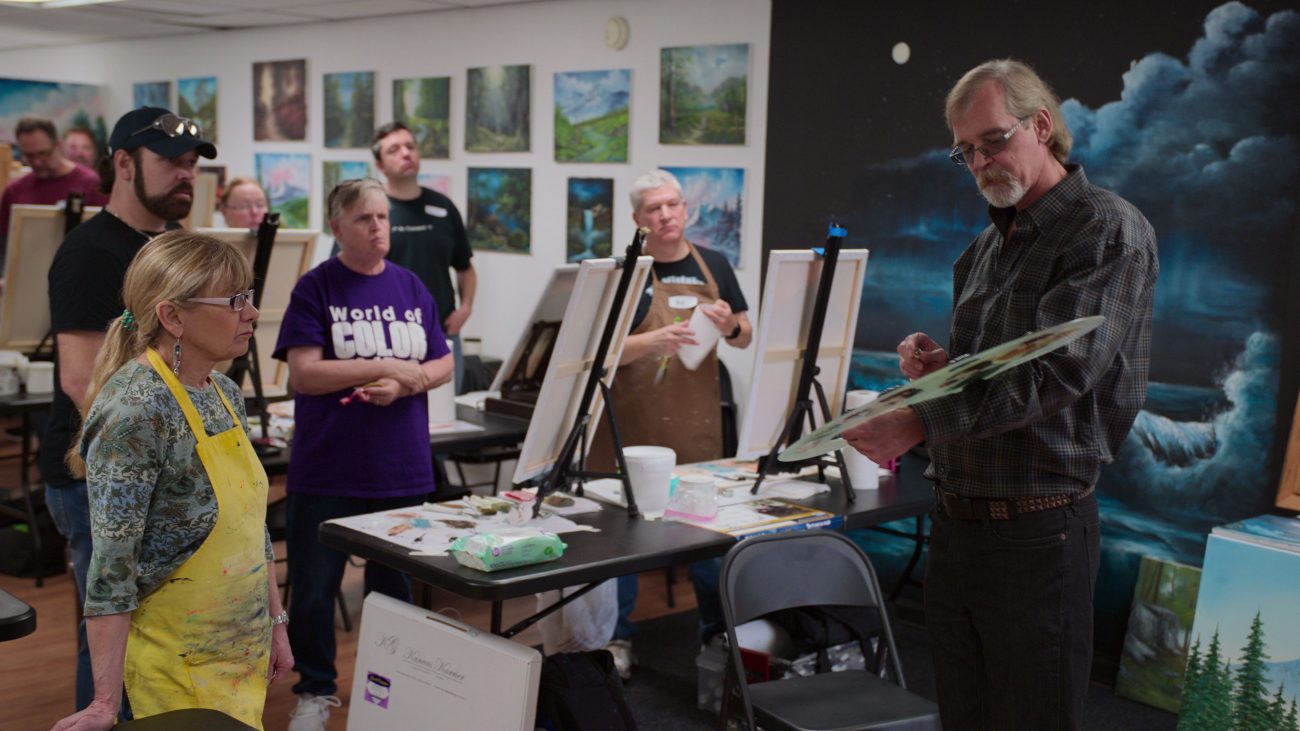 This is a scene from the TV show "Bob Ross: Happy Accidents, Betrayal and Greed," streaming on Netflix. (CNS photo/Netflix)

NEW YORK (CNS) — Known for his soothing, gentle voice, Bob Ross (1942-1995) entranced a host of viewers with his instructional PBS series “The Joy of Painting,” which originally ran for 11 years, beginning in 1983. Nor did Ross’ cultural impact end with his untimely death since his show continues to appear in reruns even today.

Episodes are also available on the internet, and they have recently proved a balm for those worried about — and confined by — the COVID-19 pandemic. So, while the artistic merit of Ross’ technique and output can be debated, his lasting influence cannot.

As the documentary “Bob Ross: Happy Accidents, Betrayal and Greed” details, however, the placid tone of Ross’ onscreen persona was not reflected in the ugly struggle over his legacy that followed his demise. Produced by, among others, comedian and actress Melissa McCarthy and directed by Joshua Rofe, the 90-minute film is streaming now on Netflix.

Rofe uses still photographs, archival video and computer animation as well as interviews with writers, art historians and Ross’ family and friends to enhance his portrait of the TV host. The result is a fascinating, often moving and — perhaps surprisingly — largely edifying profile.

The opening moments capture Ross’ essential philosophy in a single quotation. Through painting, he observes, “I create the kind of world I want,” because “on this canvas, I have absolute, total power.”

Ross was also convinced that anyone could learn to paint using the wet-on-wet “alla prima” (first attempt) technique he had mastered. “There’s an artist hidden in the bottom of every single one of us,” he maintained.

As recounted here, Ross’ early life included a stint in the Air Force, a failed first marriage, a more successful union with his second wife, Jane, and a close relationship with his half-brother, Jimmie Cox. But it was a 1982 encounter in a Muncie, Indiana, shopping mall where Ross was working as a traveling instructor for the Magic Art Company that would ultimately shape his future.

There, bereaved mother Annette Kowalski was among Ross’ students. “Desperately grieving” the recent loss of her son, Annette found herself, in the words of Ross’ own son, Steve, “renewed and inspired” by Ross’ class.

Annette and her husband, Walt, became determined, Steve says, “to bottle and sell” what Ross had to offer. They signed a contract with Ross and Jane by the terms of which they were empowered to market Ross’ work.

The upshot was, in one sense, positive. Launched in PBS’ modest Muncie studio the year after Ross first met Annette, “The Joy of Painting” went on to become, arguably, the most successful television show of its kind in history.

Yet, with the introduction of the Kowalskis into the narrative, Rofe’s biography becomes a parable about greed. Thus, as Ross lay dying of non-Hodgkin’s lymphoma, the Kowalskis badgered him to sign his name over to them.

Ross had entrusted Jimmie with the task of protecting his legacy, but the litigious couple eventually persuaded Jimmie to turn over all intellectual property rights to them. This enabled the Kowalskis to create a merchandising empire, Bob Ross Inc., which is currently worth an estimated $15 million.

Steve’s bitter sadness at being denied his rightful inheritance is understandable. And, in the film’s most touching moments, his feelings are shown to be further complicated by his fraught relationship with his dad. Ross essentially wanted Steve to follow in his footsteps, a path in life Steve resisted adopting.

The show includes a discussion of adultery and one instance of off-color language. More disturbingly, a woman describes how Ross helped her with her depression after she decided to end a pregnancy beset by complex medical issues by obtaining an abortion.

Although this inflammatory topic is only dealt with in passing, its presence seems both incongruous and alienating. It will also weigh in the scales as adults decide whether the program, which is rated TV-14 — parents strongly cautioned, is acceptable for mature adolescents.

This misguided detour aside, grown-ups will find Rofe’s work, overall, well-crafted and appealing. For all the petty squabbling and rancor that followed his passing, moreover, Ross — who often mentioned God on air, despite having no official religious affiliation — remains a figure of unusual, enjoyable and infectious tranquility.