Local faithful team up with Knights, nonprofit to send monstrances to Pakistan 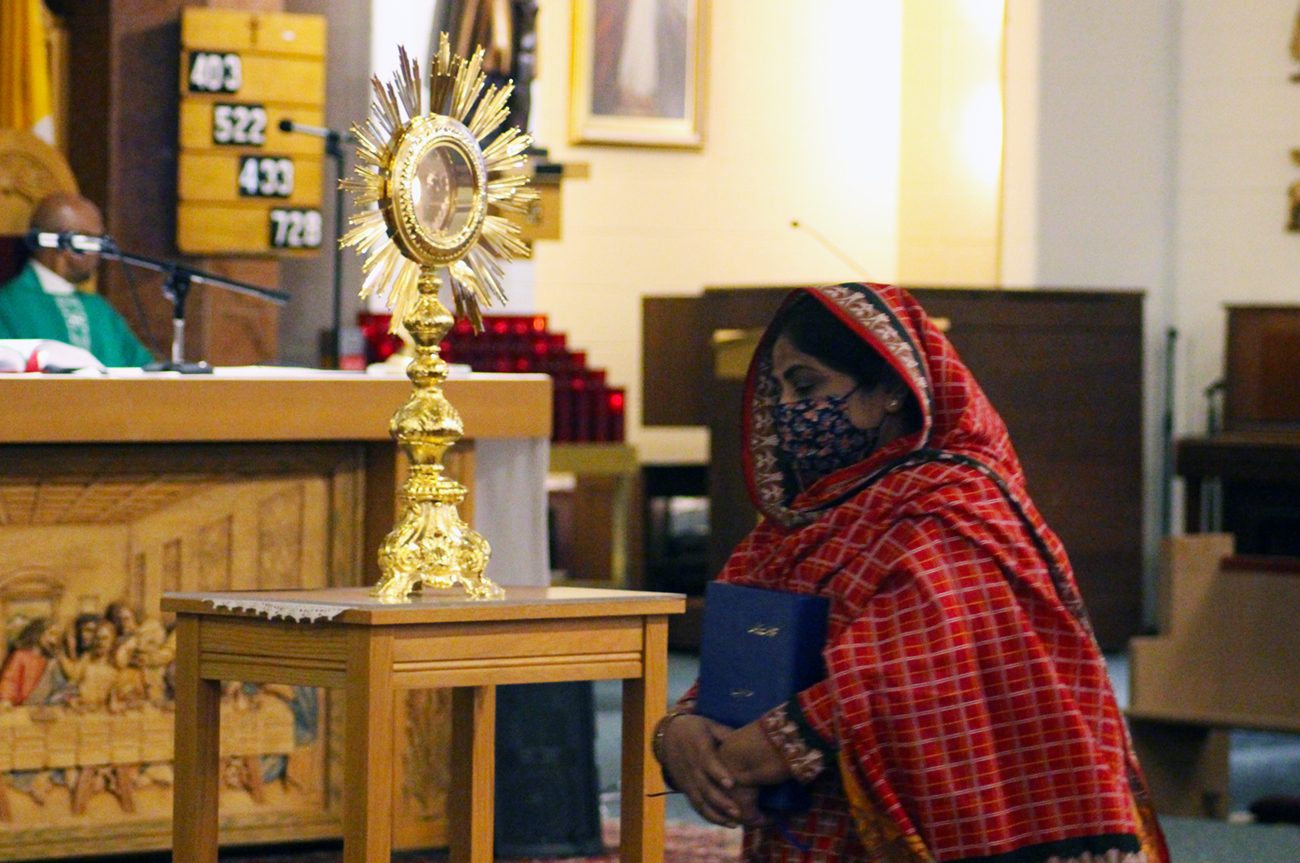 A lector walks past a monstrance during an Aug. 22 Mass for Pakistani Catholics at St. William Parish in Philadelphia. The monstrance, one of two displayed at the liturgy, will be sent to Pakistan through the generosity of the nonprofit Catholic World Mission to promote eucharistic adoration globally. (Gina Christian)

Two Pakistani dioceses will receive new monstrances for Eucharistic adoration, thanks to the combined efforts of local Knights of Columbus, a Catholic nonprofit and a Northeast Philadelphia parish.

The donations were welcomed during an Aug. 22 Mass celebrated by Father Tariq Isaac at St. William Parish in Philadelphia, home to the archdiocesan Pakistani Catholic community.

The monstrances were provided by Catholic World Mission (CWM) through a generous donation. Founded in 1998, the Georgia-based nonprofit works to alleviate both material and spiritual poverty globally through long-term charitable initiatives.

Members of the Knights of Columbus (KofC) – Norbert Mendes, a New Jersey-based field agent, and Donald (“Danny”) Sequeira of the Atlanta area — connected Father Isaac with CWM to obtain the monstrances, which will be sent to his native Archdiocese of Lahore and to the Diocese of Faisalabad.

CWM executive director and permanent Deacon Rick Medina of the Archdiocese of Atlanta personally presented the Italian-made monstrances to Father Isaac at the liturgy.

“We want to encourage prayer around the world and give parishes, especially those who cannot afford them, the gift of monstrances to promote eucharistic adoration,” said Deacon Medina. “We want to help usher the coming of the kingdom here on earth, and we strongly believe that it will be done by the power of the Eucharist.”

Sequeira agreed, saying “it is important for peoples around the world to get on their knees and pray before the holy Eucharist to combat spiritual warfare, and to be united in the love and protection of our Lord and Savior, Jesus Christ.”

Amid the turmoil of the pandemic, political discord, conflict and natural disasters, prayer and eucharistic adoration is more essential than ever, said Mendes, who found himself caught in the throes of Hurricane Ida while driving home from work Wednesday evening.

“A journey of 40 minutes took five hours,” he said. “I saw totaled cars and thought, ‘This must be another spiritual experience I’m going through.’”

On balance, however, recent calamities have prompted more politicization than prayer, said Mendes.

“Let us pray; we’re not doing that,” he said. “What are we bickering for?”

Mendes said faithful need to take individual initiative in their nurturing an ongoing relationship with God.

“We wait for the priest to read the Sunday Gospel, and we think we are great Christians,” he said. “Why aren’t we reading the Bible ourselves as well? … Maybe then we could look at the world differently.”

Faithful in the world’s severely impoverished nations have a deep appreciation for the power of prayer, particularly before the Blessed Sacrament, said CWM senior gifts officer Amber DeMartino.

“I’ve always said that the poor who have so little are really rich in their faith,” she said. “They’re the ones drawn to the Blessed Sacrament.”

One particularly destitute individual reminded her the words of the Our Father invite us “to ask for daily bread” in humble dependence on the Lord, she said.

As part of its evangelization mission, CWM is “very big on promoting Eucharistic adoration around the world, especially in poor countries,” said DeMartino.

“We get so many requests for monstrances from priests and sisters,” she said, noting that “people are reaching out to (CWM) all the time” due to Deacon Medina’s extensive network of contacts and active ministry schedule.

“Out of the darkness of everyone’s life, one of the best things people can do is pray in front of the Blessed Sacrament,” said DeMartino. “It’s going to give them the strength they need, just as Christ prayed 40 days and nights in the desert to have the strength to do what he did.”

That spiritual sustenance is particularly needed in Pakistan, a Muslim majority nation where religious minorities routinely face discrimination, violence, forcible conversion, torture and murder under the country’s blasphemy law – which Father Isaac has previously described as “a naked sword on a Christian’s neck.”

Originally introduced in 1860 under British rule, the blasphemy law applied to all religions, making it a crime to interfere in religious assemblies, insult religious beliefs or profane sacred objects or sites. In the 1980s, the law was substantially expanded and refined to specifically protect Islam from a wide range of direct and indirect affronts.

Father Isaac and his own family were forced to flee Pakistan due to the impact of the blasphemy laws.

Over nine years ago, Father Isaac’s brother and several other Christians were arrested for blasphemy in the family’s hometown of Gujranwala, near Lahore. Burned and vandalized copies of the Koran had been placed in front of their houses by local Muslim and political leaders, who then charged and imprisoned the minority group.

Most of the archdiocese’s Pakistani Catholics and Christians have similar stories to tell, said Father Isaac.

He also expects the fall of Afghanistan to the Taliban will negatively impact Christians in neighboring Pakistan, as Western nations impose sanctions and condemn Taliban cross-border links.

Faced with such restrictions, many in Pakistan “will say, ‘Because of Christian countries we are suffering, so let these Christians here suffer,’” said Father Isaac. “We’ll see what happens.”

In the meantime, said Mendes, prayer and adoration are crucial.

“If we can get people back on track, at least sitting in front of the monstrance for a while … maybe in a quiet moment, if we pray, God will listen to us,” he said.