Arrests made in blaze that destroyed former Northeast Phila. church 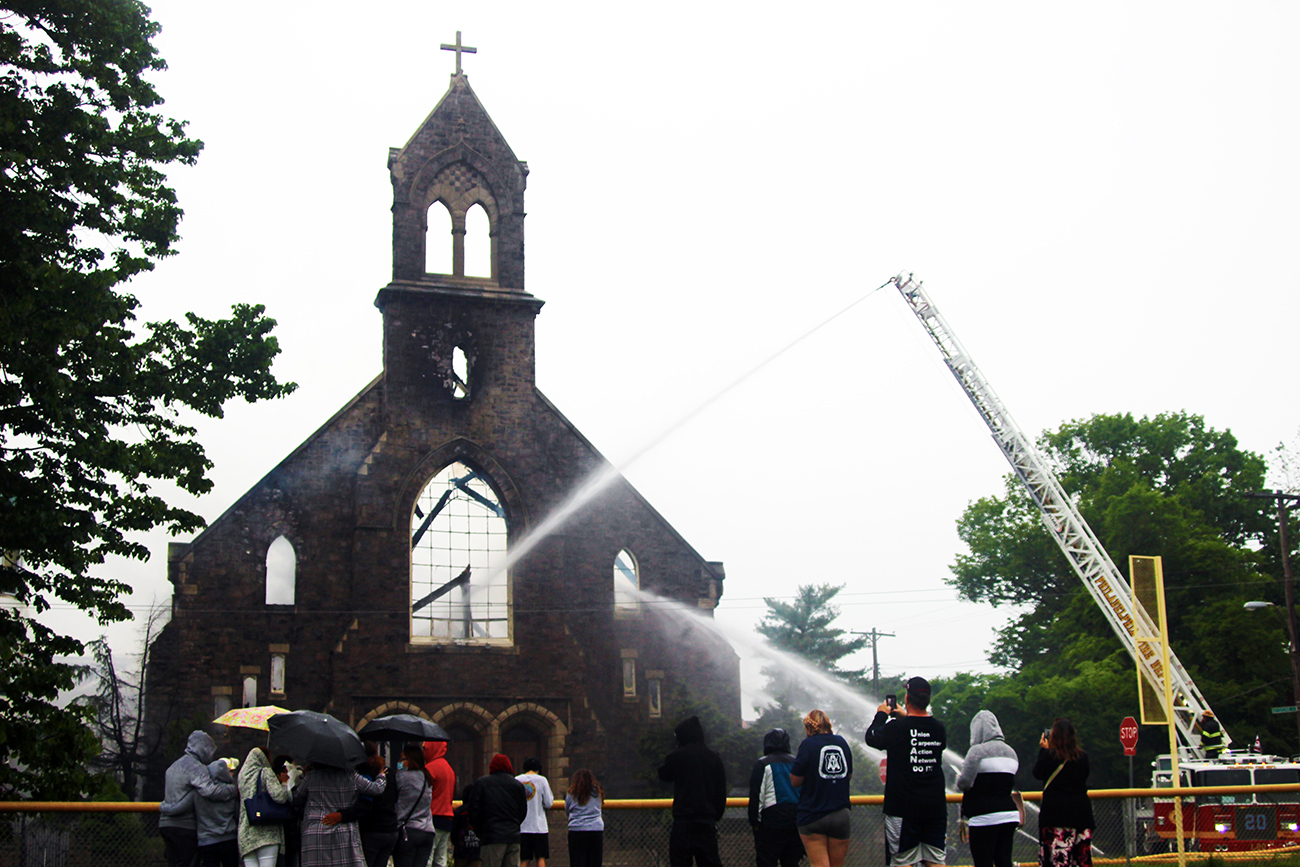 Firefighters battle a blaze at the former St. Leo the Great church in Philadelphia’s Tacony section as area residents and former parishioners watch, May 9. The Philadelphia District Attorney’s Office announced Sept. 2 that four juvenile suspects have been arrested and charged with setting the fire that gutted the former worship site, which closed in 2018 following a parish merger five years earlier with Our Lady of Consolation. (Gina Christian)

Four juveniles have been arrested for setting a blaze that destroyed a former Northeast Philadelphia church.

This afternoon, the Philadelphia District Attorney’s Office announced charges related to the May 9 fire that gutted St. Leo the Great Church in the city’s Tacony section.

The former rectory, home to Permanent Deacon Pascual Mota and his family, was also lost to the flames. No injuries were reported.

The parish had merged with nearby Our Lady of Consolation in July 2013, and St. Leo was closed as a worship site in December 2018 due to high maintenance costs. The building was sold April 6 to New York-based real estate developer David Damaghi, who said then he had planned to lease it to a performing arts organization.

The task force offered a reward of up to $20,000 for any information leading to the arrest and conviction of those responsible for the fire.

An anonymous tip enabled investigators to identify and arrest the four suspects, who face assorted charges of arson, conspiracy, burglary and related offenses in the destruction of the historic church, which was built in 1884.

Many of the church’s stones were salvaged from the Disston Saw Works, the 19th-century world’s largest manufacturing facility of its kind, which was located just blocks away along the Delaware River.

“The crimes alleged here harmed the Tacony community,” said District Attorney (DA) Larry Krasner in a statement. “Philadelphia’s historic structures are beloved for so much more than their beauty; in this case, even though the church was being re-developed for private use, St. Leo was revered for its history of baptisms, weddings, memorials, and other milestone life events held by our neighbors in this region over generations.”

In June, Archbishop Nelson Pérez celebrated a Mass of remembrance at the site of the ruined church – a liturgy that drew hundreds of former parishioners, most of them wearing bright blue T-shirts with an image of St. Leo and the caption “Tacony’s treasure, forever in our hearts.”

Father Joseph Farrell, St. Leo’s final pastor and currently pastor of Our Lady of Consolation, said he was “relieved to know what had happened” and “glad (the fire) wasn’t religiously motivated.”

DA spokesperson Jane Roh confirmed in an email to CatholicPhilly.com that the blaze “is not considered a hate crime.”

Father Farrell also expected “the legal process would take its due course,” and prayed the juvenile suspects “would be reformed someday.”

Damaghi’s attorney Aaron Gross agreed, adding he and his client were “very grateful the ATF has continued to make it clear we are not and never have been a suspect in this process.”

In a brief statement issued through his attorney, Damaghi himself said “the whole situation is very sad. Very unfortunate.”

Gross advised that demolition of the remaining structure will take place sometime around Sept. 6. His office is working with civic leaders and groups to explore “a bunch of ideas about what can be done with the property,” he said, noting that “senior housing of some sort” is one possibility.

Fire Commissioner Adam K. Thiel said the arrests were “the result of countless hours of hard work and dedication” by law enforcement, and “(hoped) the ultimate resolution of this case is some small comfort to the St. Leo’s family and the Tacony neighborhood.”

At the same time, she remains focused on organizing an Oct. 16 all-class reunion for St. Leo School that will take place at Cannstatter Volksfest-Verein in Northeast Philadelphia.

The guest list includes the many Sisters of St. Joseph who taught at St. Leo School over the decades, she said.

“We’re going to pay for the nuns to go to the event,” said Kuvik. “They’ve given their life to this church.”

NEXT: Local faithful team up with Knights, nonprofit to send monstrances to Pakistan