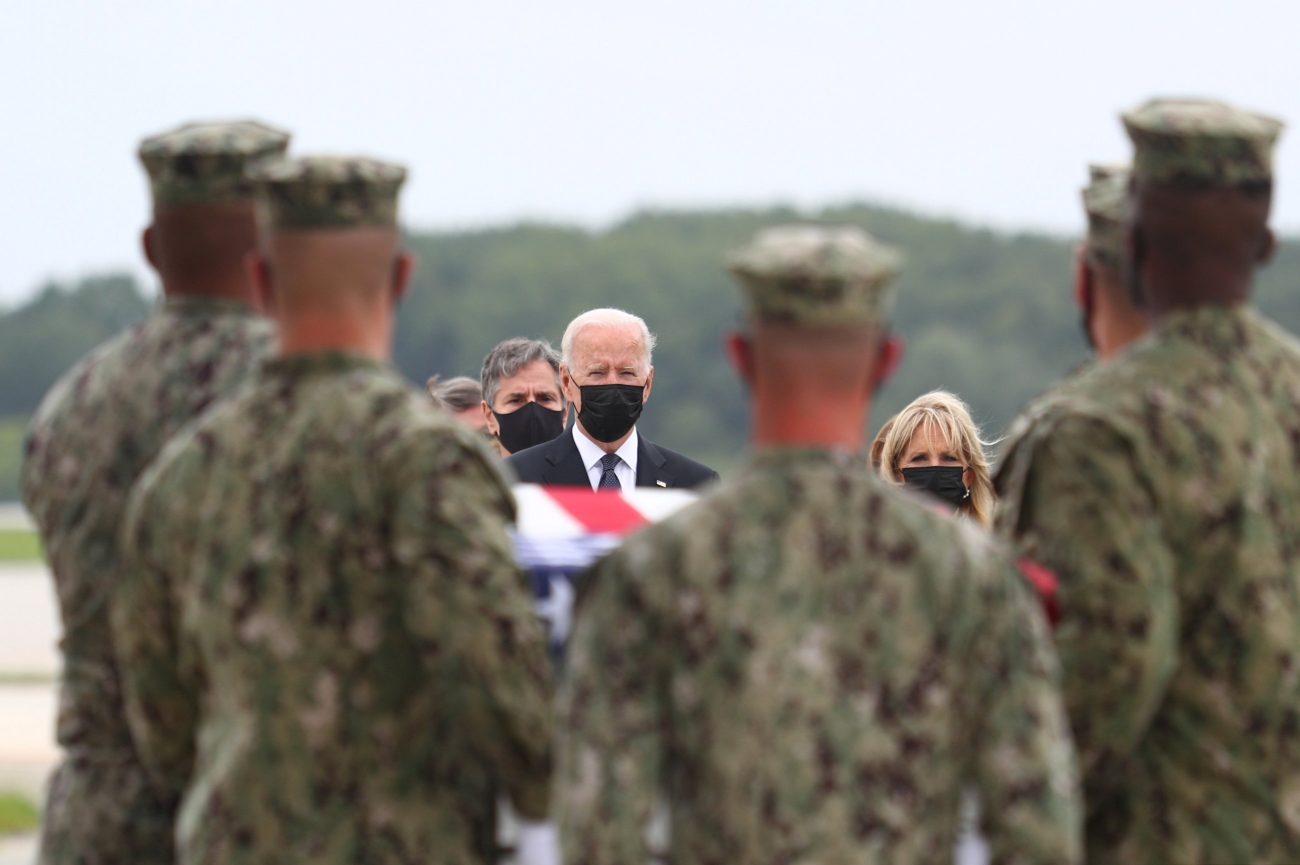 President Joe Biden attends the dignified transfer of the remains of U.S. Military service members at Dover Air Force Base in Dover, Del., Aug. 29, 2021, who were killed by a suicide bombing at the Hamid Karzai International Airport. (CNS photo/Tom Brenner, Reuters)

WASHINGTON (CNS) — The United States last declared war nearly 80 years ago in the conflict known as World War II. Afterward, there were several wars fought that weren’t declared as such.

Some ended successfully from a military standpoint: the 1983 invasion of Grenada, 135-square-mile island in the Caribbean that was set to seat a communist government. Another was the 1989 invasion of Panama to oust its military strongman, Manuel Noriega, who had holed up in the Vatican embassy.

Others were less successful. The war in Korea ended in a tense stalemate between north and south that persists today. Another was Vietnam, where the communist-led Viet Cong in the north overran the south following withdrawal of U.S. troops after 14 years and 58,281 U.S. military deaths.

Since 2001, Congress passed a bill calling for AUMF — Beltway-speak for authorization for use of military force. Under AUMF, Congress gives the president the leeway to set the terms of military engagement. The bill was passed one week after the 9/11 terror attacks and was used to send U.S. forces to Afghanistan that year and Iraq in October 2002.

A Congressional Research Service report five years ago found 35 other citations of AUMF to justify U.S. military involvement in 14 countries and on the high seas.

With all of these military adventures, do they meet the criteria of just war?

“Whether it’s authorized by Congress or not, most our military adventures starting with Vietnam have been unjustified morally,” said Jim Sterba, an ethics professor at the University of Notre Dame.

With Afghanistan’s takeover by the Taliban in August, following a U.S. pullout after nearly 20 years of combat, there was “no moral justification” for invading, Sterba said, adding: “There are alternatives.”

First, a review of what criteria are needed for war to be considered ethically just under just-war principles. Having the nation’s leader pronounce, “Our cause is just” is not one of them.

However, the cause must indeed be just. A nation cannot go to war just to punish people who have done wrong or taken things belonging to another nation.

The principle of comparative justice says the wrongs suffered by one side in a conflict must significantly outweigh those suffered by the other.

Only duly constituted authorities can wage war. That would not mean dictatorships like Adolf Hitler’s Germany, and deceptive military actions like the U.S. bombing of Cambodia in 1968 violate this criterion.

The right intention is also key. The cause must be just and force can be used only to right the wrong suffered.

Probability of success is another criterion. Arms cannot be used in a futile cause.

Proportionality is a related criterion. The benefits of waging war must justify the violence used. Self-defense, or defense of another, must be present.

Finally, war must be waged as a last resort. All other means of resolving the issue peaceably must first be exhausted.

Sterba said the Taliban twice offered to find Osama bin Laden, the architect of the 9/11 attacks, for the United States in exchange for having one Islamic judge on a three-judge panel that would try him for his crimes, but the United States nixed the deal each time. “‘No,’ we said, ‘we’re coming in.’ Because we thought we could do it,” he added.

“There’s effectively no difference” between AUMF and declared war, including military conduct during the conflict, said Jesuit Father Drew Christiansen, a senior fellow at the Walsh School of Foreign Service of Georgetown University’s Berkley Center.

“People haven’t gone back to get further approval as the conflict has gone on,” Father Christiansen said. What is needed, he added, is for “the terms of the AUMF to get tightened and Congress get more involved in the regulation and enforcement of AUMF.”

“The AUMF is explicitly about empowering the president for a quick, effective, short-term response, thought to be needed in the wake of 9/11, whereas with the War Powers Resolution, Congress is more empowered in terms of declaring war and in terms of authorizing military budgets,” said Brian Orend, a philosophy at the University of Waterloo in Ontario, and the author of books on just-war examinations.

After President Richard Nixon ordered the bombing of Cambodia without Congress’ consent, Congress passed the War Powers Resolution of 1973, intended to limit the president’s authority to conduct war.

“Many presidents, since 9/11, have appreciated the added latitude of the AUMF, whereas their critics would argue the urgency is long gone, and is no longer needed. But, in the wake of the Taliban re-taking of Afghanistan, perhaps the feeling of urgency has returned to some extent,” Orend said in an Aug. 19 email to Catholic News Service.

“It was felt needed to authorize quick action, which Congress perhaps might not be capable of, as well as to authorize so-called ‘measures-short-of-war,’ like cruise missile strikes, or drones, launched from afar,” he said.

“At the same time, the AUMF is explicitly nested within the War Powers Resolution, where Congress is quite empowered, especially in terms of formal declarations of war as well as financing armed conflict,” Orend said, adding he believed the 2001 law would not be altered by Congress.

Yet without changes to the law, such AUMF uses may continue to be drawn out, Sterba told CNS. “The fact that there is the unjustified nature of it means there’s opposition at home to doing this,” he said.

And looking at the current situation in Afghanistan, Father Christiansen pointed out that because of the corruption in the Afghan government, its inability to reform and the ineffectiveness of its forces, the U.S. “should have withdrawn a long time ago.”

Yet where was the call for withdrawal, or mounting an argument that the war in Afghanistan was no longer just?

“It was so outweighed by the debate in Iraq I didn’t take into consideration at the time how it was playing out in Afghanistan,” he replied.

“Iraq was the war of choice and the problems just kept multiplying there and my attention was there and the attention of most ethicists was there. Afghanistan became a kind of backwater.”

That status may have been what foiled the U.S. military effort, Father Christiansen said.

It’s what did in Alexander the Great millennia ago. “There’s a battle of technological civilization against tribal people,” the priest noted, adding that tribal rule seems to win each time.

NEXT: U.S. bishops’ Labor Day statement calls for economy that works for all