Australians close first phase of ‘walking together’ in Plenary Council 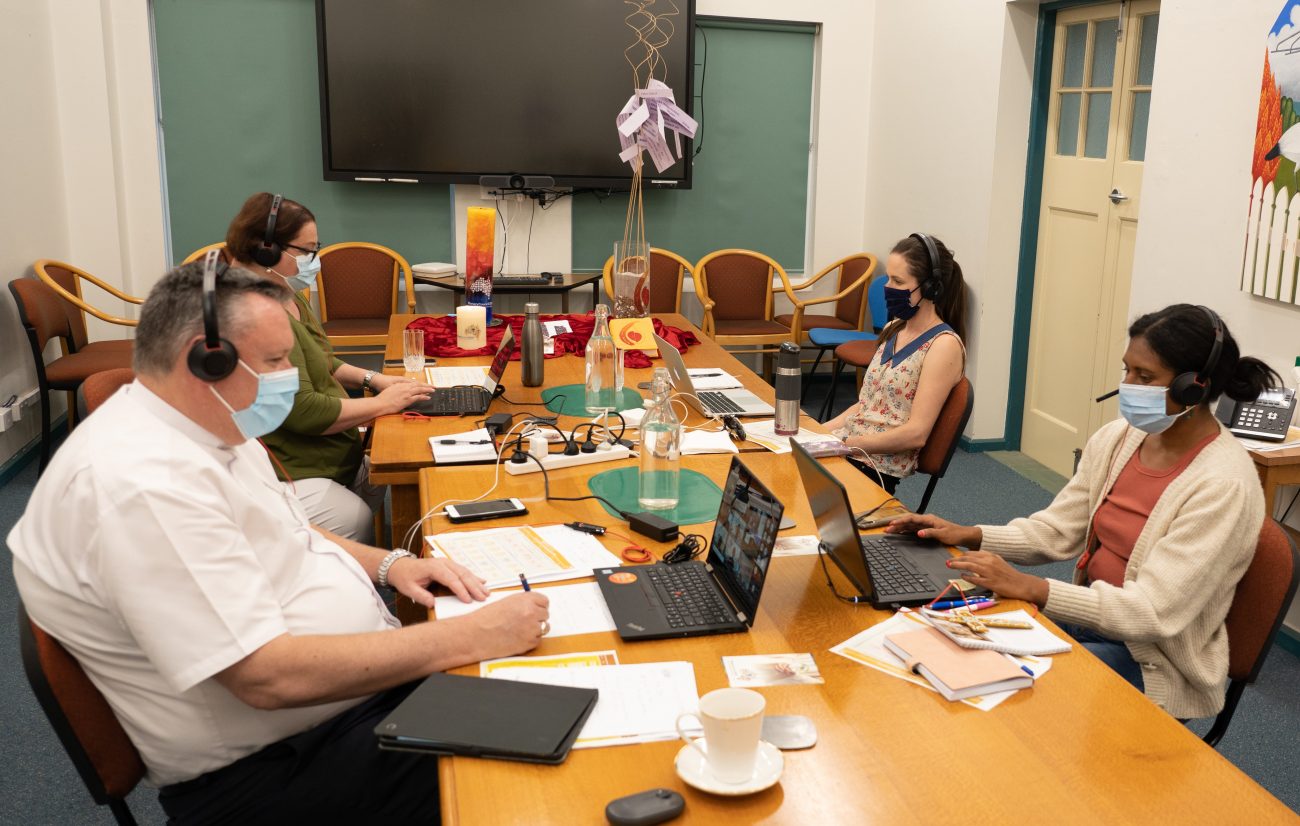 Plenary Council members from the Diocese of Townsville, Australia, gather for small-group sessions online Oct. 4, 2021. Although they were allowed to meet in a small hub for the livestream large gathering each morning, members used computers to connect virtually most afternoons for discussions and discernment on 16 different questions the assembly was considering. (CNS photo/Diocese of Townsville)

As Pope Francis launched the consultation process for the 2023 Synod of Bishops at the Vatican Oct. 9-10, the Catholic Church in Australia was closing out an exercise in the process of “synodality,” which the pope has described as “walking together.”

Australian Catholics concluded the first assembly of their fifth Plenary Council, an extensive process announced in 2016, when, as the church was rocked by revelations from a government inquiry into institutional abuse, church leaders looked to restore trust.

The process of consultation with Australian Catholics asked, “What do you think God is asking of us in Australia at this time?”

“Here in Australia we have put our faith in the fact that the Plenary Council was born of the Holy Spirit, who has accompanied and empowered us on the journey of these years and has shaped the work of this first assembly,” said Brisbane Archbishop Mark Coleridge, president of the Australian Catholic Bishops’ Conference.

“Without the Holy Spirit there would be no council. There may be a meeting, but it would be no more than politics and ideology, the crude struggle for power.”

“At the end of this extraordinary week, how do we feel?” he asked in his homily for the closing Mass of the assembly Oct. 10. “Weary and a bit ragged, because it was very hard work; relieved, even slightly surprised, because so much could have gone wrong; satisfied, because it has produced real fruit; grateful to God and to each other, because it has all been more gift than hard work; intrigued to see what happens between now and the second assembly in the middle of next year.”

The Mass, like others throughout the assembly, was livestreamed because of the COVID-19 pandemic. In parts of Australia where government lockdown rules allowed, Catholics gathered in small hubs.

Each morning, all 278 delegates met in a large virtual group. Each afternoon, they joined smaller virtual groups to discuss one of 16 questions that emerged from the listening and dialogue process of the council.

Toward the end of the assembly, Perth Archbishop Timothy Costelloe, Plenary Council president, shared with the members a clear timeline of how the work of the Plenary Council would continue.

Each of the 10 small groups at the first assembly prepared reports on their discussions from the week with the help of each group’s facilitator. The reports are expected to act as a starting point for consultation and discussion in the lead up to the second assembly, scheduled to take place in Sydney from July 4-9.

The reports on the 16 agenda questions included proposals and requests for further investigation and research to create a more missionary, Christ-centered church in Australia.

Specific proposals included parishes establishing small groups that meet for an annual synod and that each diocese should have a synod at least once every three years; studying and learning from the synodal journey that resulted in the Uluru Statement of the Heart to give Indigenous people a greater voice in Australian affairs; encouraging small ecclesial communities — such as home/family groups; and establishing forums for open dialogue and discernment, especially with those groups who feel excluded in the church.

Archbishop Costelloe emphasized that any proposals put forward by members at the first assembly would need to be discussed over the months leading up to the second and final assembly.

In November 2022, the acts adopted by the Australian bishops will be sent to the Vatican for approval. When those acts are approved by the Vatican, they will be implemented in Australia and be binding on Australian Catholics.

Archbishop Costelloe reminded members of the support they had been receiving throughout the council journey, but in a particular way during the first assembly.

“This week we have not been alone, notwithstanding the isolation which has been forced upon many of us because of COVID,” he said as he closed the formal proceedings of the final assembly Oct. 9.

NEXT: By listening to Holy Spirit, synod can be process of healing, pope says