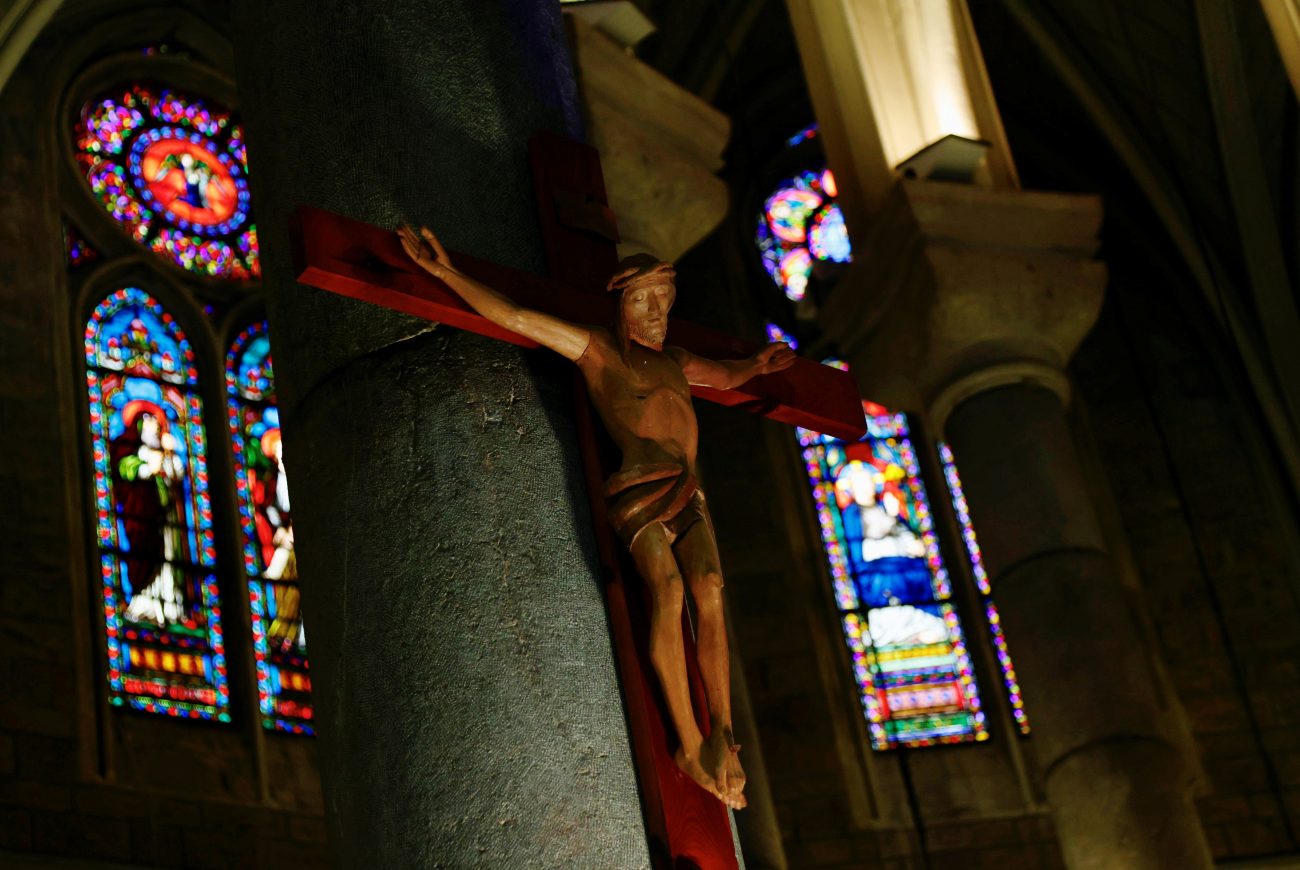 A crucifix is pictured in Notre-Dame Basilica in Nice, France, Oct. 4, 2021. A new report on clergy sexual abuse in the Catholic Church in France shows there have been 3,000 abusers since the 1950s. (CNS photo/Eric Gaillard, Reuters)

VATICAN CITY (CNS) — The Catholic Church’s inability to make victims of abuse their top concern is a cause for intense shame, Pope Francis said.

In the wake of a major report investigating the extent of sexual aggression and abuse against minors in the church in France, the pope said, “I wish to express to the victims my sadness, my grief, for the traumas they have endured, and also my shame.”

This deep sense of shame, “our shame, my shame,” he said, was for “the too lengthy inability of the church to put (victims) at the center of its concerns.”

The pope made his remarks at his general audience in the Vatican’s Paul VI hall, in the presence of a group of bishops and a cardinal from France who had been in Rome for their “ad limina” visit. Just before the audience, the pope and four of the bishops gathered privately for a moment of silent prayer for victims.

After delivering his main catechesis, the pope highlighted a recent report published by an independent body commissioned by the French bishops’ conference.

According to the four-year investigation, an estimated 216,000 children were abused by priests since 1950, and more than 100,000 others were abused by lay employees of church institutions.

The pope commented on the “considerable number” of known victims revealed in the report.

Assuring victims of his prayers, the pope asked everyone to pray with him: “To you, Lord, the glory; to us, the shame. This is the moment of shame.”

He encouraged the country’s bishops and superiors general of religious orders “to continue to do their utmost so that similar tragedies are not repeated.”

Pope Francis also expressed his closeness to the priests in France, assuring them of his “paternal support before this ordeal, which is arduous but beneficial.”

He invited the nation’s Catholics to take on their responsibility for guaranteeing that “the church be a safe home for everyone.”

Meanwhile, the president of the Pontifical Commission for the Protection of Minors, U.S. Cardinal Seán P. O’Malley, welcomed the publication of the final report of the “Independent Commission on Sexual Abuse in the Catholic Church in France” (www.ciase.fr/).

The report “is an indictment of the failures of leadership in the church and those holding responsibility for the care and protection of the faithful,” the cardinal said in a written statement Oct. 6.

“This history of unchecked abuse extending over the course of generations challenges our comprehension of how innocent persons could have suffered so terribly and their voices been ignored for so long,” he wrote.

Working with government officials and law enforcement, he said, the church “must not fail in the commitment to seek healing and justice for the survivors.”

The cardinal welcomed and encouraged the implementation of new measures outlined by church leaders in France earlier this year, and said they show how the “cruel indifference” that survivors experienced in the church “can be turned into care and protection.”

“The church in France has taken the necessary first steps for dealing with the scourge of sexual abuse by commissioning this report,” Cardinal O’Malley said. “We must all adhere to Pope Francis’ directive, ‘there is absolutely no place in ministry for those who abuse minors or vulnerable adults.'”

On behalf of the papal commission, he wrote, “I express our profound sorrow and humbly ask forgiveness on the part of all those harmed by these crimes and reprehensible violations of human dignity.”

“This report is yet another clarion call to the church throughout the world to hold the safeguarding and protection of children and vulnerable adults as our highest priority,” he said.

Matteo Bruni, director of the Vatican press office, told reporters Oct. 5 that Pope Francis was praying for the tens of thousands of victims of clerical sexual abuse in France and urged the Catholic Church in the country to “undertake a path of redemption.”

Pope Francis learned “with sorrow” of the contents of the report and his “thoughts go first of all to the victims, with great sorrow for their wounds and gratitude for their courage in reporting” their abuse, Bruni said in response to reporters’ inquiries in the wake of the report’s release.

The pope also prayed that the Catholic Church in France, “in the awareness of this appalling reality” of the suffering of vulnerable children, would trace out a path of repentance and reform.

“With his prayer, the pope entrusts to the Lord the people of God in France, particularly the victims, that he may give them comfort and consolation, and with justice may the miracle of healing come,” Bruni said.

The report, released Oct. 5, was written by an investigating commission led by Jean-Marc Sauvé, a senior civil servant.

Before the report was published, he told reporters the inquiry found evidence of between 2,900 and 3,200 abusive priests out of a total of about 115,000 who had served in France since 1950.

NEXT: Report estimates 330,000 children abused in French church since 1950s