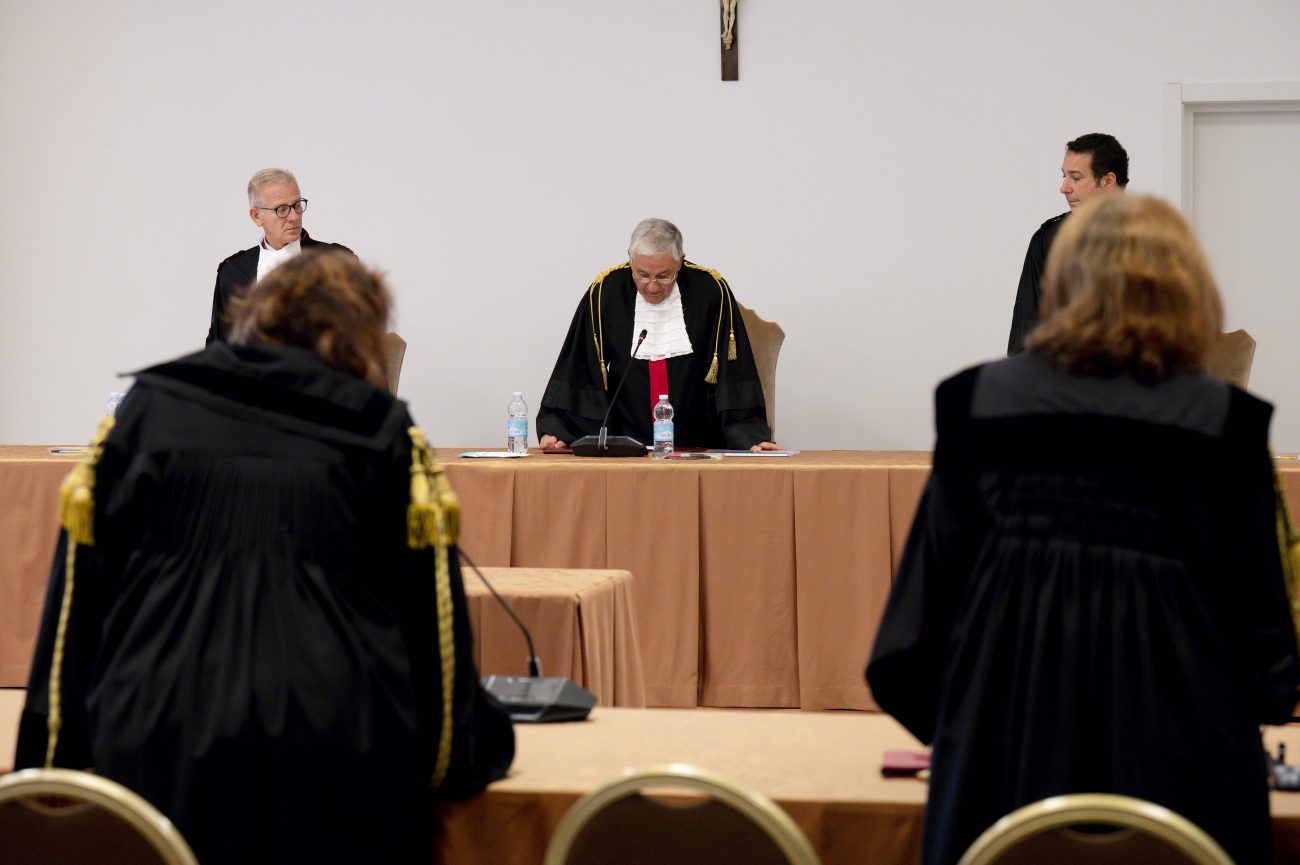 Vatican Court President Giuseppe Pignatone speaks during the verdict of Father Gabriele Martinelli and Msgr. Enrico Radice i Oct. 6, 2021. The two clergymen, who were accused of sexually abusing a younger student at St. Pius X Pre-Seminary between 2007 and 2012, were cleared of the charges. (CNS photo/Vatican Media)

VATICAN CITY (CNS) — A Vatican court cleared two priests involved in a controversial sex abuse case at a minor seminary once located at the Vatican.

Handing down the verdicts Oct. 6, Giuseppe Pignatone, president of the Vatican City State criminal court, said the court acquitted Father Gabriele Martinelli, who was accused of abusing another student from 2007 to 2012 when he studied at the St. Pius X Pre-Seminary, because “he was younger than 16” when most of the alleged abuse occurred.

Although he and his alleged victim — known in court documents as L.G. — were under the age of 18 when the abuse allegedly began, prosecutors had accused him of continuing to abuse the younger student until Martinelli was 20.

In addition, the court absolved Father Martinelli of the “crimes of aggravated rape and aggravated lewd acts” that allegedly occurred after the age of 18 due “to lack of evidence” and the expiration of the statute of limitations.

In a statement to the press, the court said the trial established “that sexual relations of various kinds and intensities” occurred between the defendant and the accuser “and that they actually lasted for the whole of the above-mentioned five-year period” when the young men were at the minor seminary. However, the court said, “there is no proof that the victim was forced into such relations by the defendant with the contested violence or threats.”

The court cited “significant contradictions” in statements made by the defendant and in telephone messages he exchanged with Father Martinelli later as making it impossible to establish the priest’s guilt “beyond reasonable doubt.”

The Vatican criminal court also cleared Msgr. Enrico Radice, the former rector of the St. Pius X Pre-Seminary, who, if convicted, would have faced four years in prison for “aiding and abetting sexual violence.”

Msgr. Radice was accused by Vatican prosecutors of hindering the investigation into the abuse allegations, including allegedly lying to Vatican investigators in 2018 when he affirmed with absolute certainty that he had no knowledge of sexual acts ever taking place at the seminary while he was rector.

The former rector was found not guilty of forging the signature of Bishop Diego Colletti of Como in a letter vouching for Father Martinelli’s suitability for ordination. The court said that the letter in question was irrelevant to the accusations against him.

The Diocese of Como, which owns the seminary, and the Opera Don Folci, the religious institution that runs it, also were accused of failing to protect the young students. However, the verdict did not include any judgment against the two institutions.

Speaking to journalists after the verdict, Rita Claudia Baffioni, Father Martinelli’s lawyer, lauded the decision, noting that “there were infinite gaps” in the prosecution’s accusations, including the fact that no witnesses called to testify saw the alleged abuse.

“One couldn’t say beyond any reasonable doubt because here the doubts were plenty,” she said.

Agnese Camilli, a lawyer for the St. Pius X Pre-Seminary, said the verdict vindicated Msgr. Radice, who she said was known for going out of his way to help students at the school, “especially the most needy, in a material, spiritual and moral way.”

The ruling, which came nearly a year after the trial began, brings an end to one of the most the controversial sex abuse cases within the Vatican walls.

During the trial, several former students said they experienced an “unhealthy” environment at the seminary, including witnessing inappropriate behavior,

In May, Pope Francis ordered the minor seminary to move to a new location in Rome before classes begin in the fall.

PREVIOUS: Pope will not attend U.N. climate summit in Glasgow

NEXT: Church’s inability to put victims first is ‘moment of shame,’ pope says