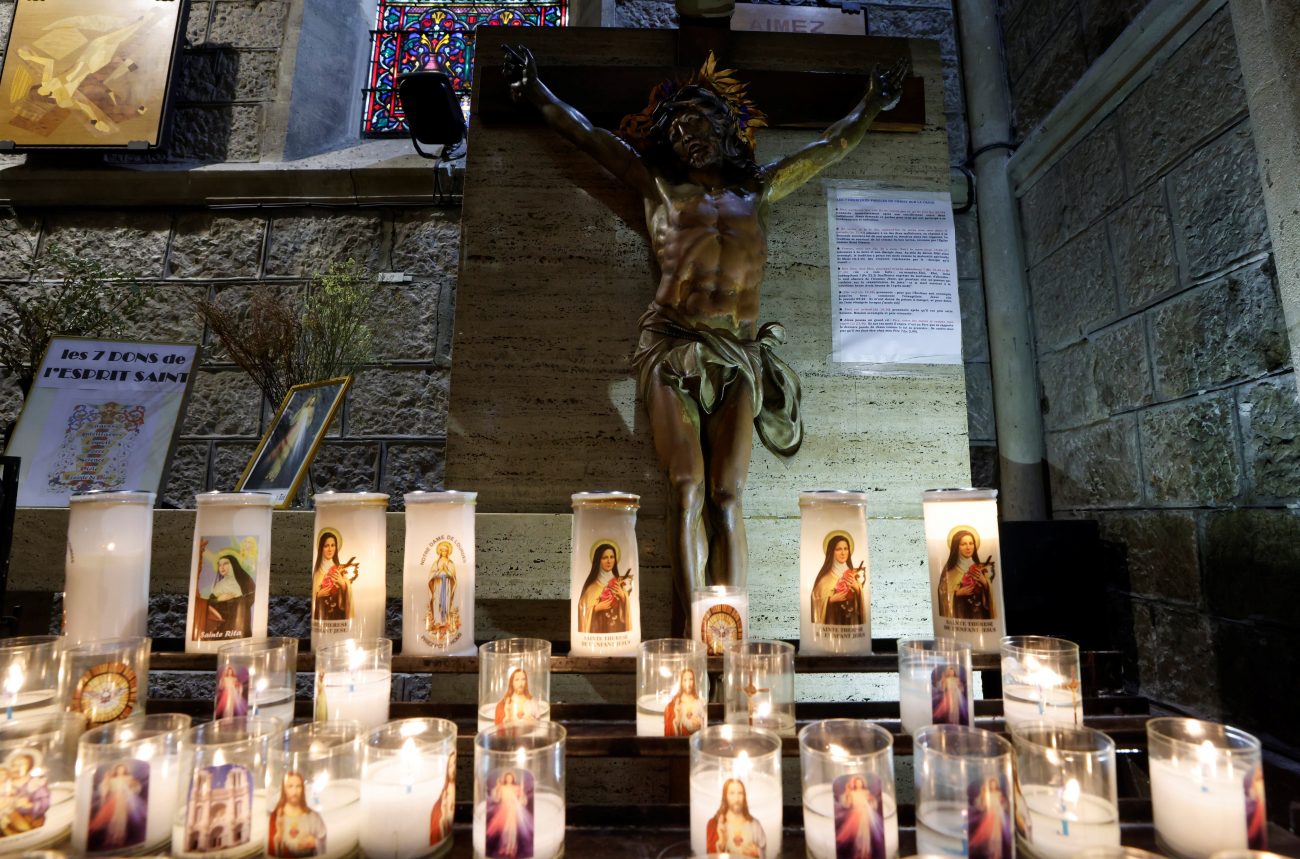 A crucifix and candles are pictured in Notre-Dame Basilica in Nice, France, Oct. 4, 2021. A new report on clergy sexual abuse in the Catholic Church in France, due out Oct. 5, 2021, shows there have been 3,000 abusers since the 1950s. (CNS photo/Eric Gaillard, Reuters)

An independent report on sexual abuse in the French Catholic Church estimates 330,000 children have been abused since the 1950s. Most of the victims were pre-adolescent boys of all social backgrounds, and more than a third of the assaults were committed by laypeople.

The report did not attempt to quantify the number of adults abused, but said some of those sexually assaulted were nuns or seminarians.

In the report released Oct. 5, the 21-member Independent Commission on Sexual Abuse in the Catholic Church described itself as “witnesses of witnesses.”

“The picture thus drawn reveals that the phenomenon of sexual violence in the Catholic Church from 1950 to the present day is massive; that is has decreased over time but is still present; that it is based on numerous clearly identified traits of a systemic nature. The trauma suffered by the victims is compounded by the perpetrator’s standing,” said an English summary of the 2,500-page report.

“In all the testimonials … the first cry is for justice,” it said. “In other words, before proclaiming ‘it must never happen again,’ the ‘it’ has to be recognized, acknowledged, and described, those responsible for ‘it’ need to be designated and, in as far as is possible, reparation for ‘its’ consequences need to be found. It is not enough for the church to claim awareness, albeit too late in the day. Or to claim that the past is the past and that for today’s and tomorrow’s children and vulnerable persons the same mistakes will not be repeated.”

“The way in which victims spoke out or broke their silence, as they told the commission of their experiences, shows just how long and obstacle-strewn this process is and how it is all too rarely properly taken into account or followed up by the entourage or institution,” it said.

Archbishop Michel Aupetit of Paris said the French bishops and religious orders commissioned the investigation “in order to get the truth, because we absolutely owe it to the victims and to all the faithful.”

“We have discovered this truth with all of you,” he said in an Oct. 5 statement posted on the website of the Archdiocese of Paris. “It is far beyond what we thought we knew, it is frightening.”

Archbishop Aupetit said that although the church had strived for several years to respond to “this terrible tragedy seriously,” it was clear “that we still have a long way to go to welcome the suffering of the victims, to accompany them in their reconstruction, and to make our common home safer.”

“We will need all of you to enlighten us and help us in the necessary reforms,” he said.

“Please know that I share your deep sadness at these terrible revelations. I invite you to pray for the victims whose lives have been shattered. I also ask you to pray for all the priests, deacons and laity, that they may continue to work with dedication. We are all deeply saddened.”

The commission identified six categories of abuse of children: “parochial abuse,” committed by a local priest or vicar; “school abuse” by a priest, religious teacher or house master; abuse by a family member or close family friend; abuse committed with the context of “a patronage or Scouts movement”; abuse committed by “a priest acting, or claiming to act, as a psychotherapist”; and what it labeled as “prophetic abuse, committed within the context of so-called new communities, which were particularly popular in the 1970s.”

Regarding abuse of adults, “there emerges an overall sense of authority morphing into power and control becoming all-important, particularly in situations of vulnerability which are reinforced by the ecclesiastical context.”

The commission said it did not overstep its authority but felt “its creation as an independent body … at this precise moment in the history of the institution as it is hit by the acute sex abuse crisis, confers upon it the responsibility to dig right down to the roots of the problem, as deeply as the church is itself doing.”

It said canon law was “entirely inadequate with regard to fair trial standards and human rights in a matter as sensitive as the sexual abuse of children,” and it cited as a problem clericalism, as Pope Francis cited in his 2018 Letter to the People of God. It noted that since the turn of the century, the Catholic Church had made great strides, nationally and internationally, on speaking out against clergy sexual abuse.

But it said the church must establish “a procedure for the recognition of abuse, even in time-barred cases, and provide compensation for the harm suffered. The governance of the church must be reorganized to be more pluralist and to regulate the risks of abuse of power. Training is a key preventive tool that should be widely implemented.”

It also said that although “money could not make up for the irreparable damage incurred,” the church must set up a system of financial reparation, to be paid directly to the survivor of abuse or, if that person had died, to the “indirect victim.” The commission noted the bishops’ conference had said it would provide the financing for an endowment for these payments, but the commission said it should not appeal to the faithful for donations. It said the majority of contributions should come from the Union of Diocesan Associations of France, with support of the bishops’ conference, and the Conference of Religious of France.

The first of the 45 recommendations directly addresses the urgent question of safeguarding and demands that any person who has committed violent or sexual offenses against children have no access to minors. It also recommends mandatory checks of criminal records of clergy and church workers with access to children and suggests that the church sets up a hotline for people to report abuse.

The recommendations also suggest a review of the traditional discipline of priestly celibacy to allow the ordination of married men, and they demand that priests break the seal of confession and inform police of sexual offenses against children or vulnerable people that are reported to them by penitents.

One recommendation is that power should be taken away from diocesan bishops in favor of a more democratic and synodal governance of the local church. The commission said the bishops need to closely examine the “concentration of the powers of order and of governance in the hands of the same person, which leads to an insistence on the rigorous exercise of power.”

Archbishop Éric de Moulins-Beaufort of Rheims, president of the French bishops’ conference, welcomed the report in a joint statement with Dominican Sister Véronique Margron, president of the Conference of Religious of France. Their two organizations had commissioned the inquiry, and they thanked its chairman, Jean-Marc Sauvé, honorary vice president of the Council of State, for his work.

They said they were “shamed and outraged” by his discoveries and promised to study all of his recommendations.

NEXT: Australians close first phase of ‘walking together’ in Plenary Council